Everyone had a blast yesterday at the La Costa hotel pool! They have great water slides and a fabulous shallow pool for the little ones. For dinner, we all went to Souplantation. I had my standard salad except that I put hard boiled egg on it this time: 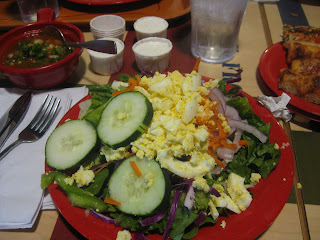 I also had a bowl of the low fat chili (love that stuff) and a slightly excessive amount of pizza bread. I'm slightly obsessed with that stuff. My husband and I always joke that if they stopped making that pizza bread, they would go out of business. :) They had my favorite dessert there: Lava Cake. When it came time to go get it, it was gone and wouldn't be ready for 30 more minutes. Maybe it was a sign I shouldn't be eating lava cake? I settled for the frozen yogurt with caramel & chocolate sauces as wells as some peanuts: 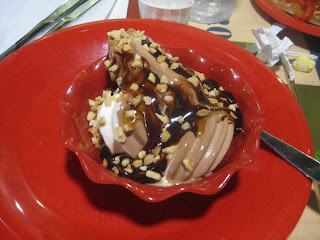 For breakfast, I decided on Fage yogurt mixed with sugar free strawberry jelly, Fiber One cereal and blackberries: 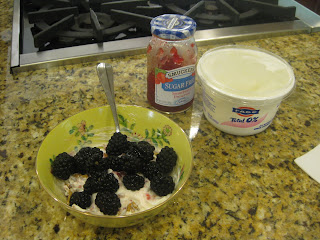 After I took my son to school and my daughter to camp, I went to Zumba class....at least I thought I was going. Apparently, the Zumba instructor is at a Zumba conference all week so class is cancelled this week. BOO! I hadn't worked out since Saturday so I needed to do something! I decided to do 45 minutes on the "dreadmill" and call it a day.

I quickly showered and took my lunch to go since I had to get to my wax appointment right away. I packed a sliced apple and a Flat Out Wrap with Better N Peanut Butter: 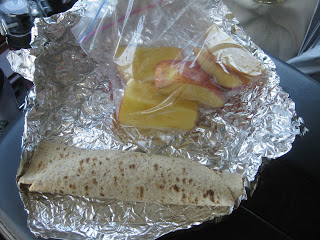 After my appointment, I went to Golden Spoon for some frozen yogurt. I didn't take a picture because I ran into a mom from the preschool with her friend that I didn't know and they asked me to sit with them. I didn't want to have to explain about the bloggie. :) I did have a small with Graham Cracker, Cookies n Cream and Vanilla Custard flavors. It rocked my face off!

After getting home with the kiddos, I crossed a couple of things off my never-ending To Do list. I needed to get dinner going early tonight because I have to go to Back To School Night at my son's school. I pulled some Four Cheese Mac & Cheese leftovers out of the freezer and heated that up. I made a big salad to go with it: mixed greens, butter lettuce, cucumbers, red onions, mushrooms all tossed with a balsamic vinaigrette: 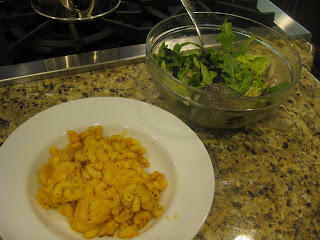 I put Cholula all over the pasta after this picture was taken. :) I was worried the pasta would be dry when reheated but it tasted great!

That's all I have to report. See ya tomorrow!

For those of you bloggies...do you feel embarrassed when you take pictures of your food? I don't so much anymore....it's just a habit at this point. I sometimes still feel weird when I take pictures of my sandwiches at Subway....I feel like everyone in line is looking at me like I'm strange.
Email Post
Labels: Cholula Fage fiber one Flat Out Wraps frozen yogurt Golden Spoon peanut butter Souplantation