This is going to be a quick post because I'm tired....it's past this granny's bedtime!!

What I find strange is that during the week, I have to wake my son up to get ready to go to camp at 7:30AM. This morning....he rolls into my room at 6:45AM ready to go. What's up with that??? I guess it gave me more time to figure out what I wanted for breakfast. I decided to go with an egg beater burrito on a whole wheat tortilla. I mixed the rest of my pico de gallo and some spinach in with the eggs. I poured Cholula all over it after this picture was taken: 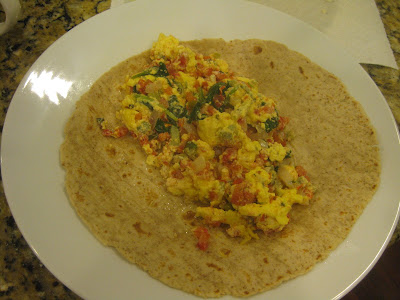 My kids decided they wanted pancakes. Hmmm.....hubby isn't home and we usually make pancakes when my husband is here...he has declared himself the best pancake "maker" in the world. There's a funny story here. When we were dating I would hear him mention every so often that he made the best pancakes in the world. I heard about these pancakes forever! Finally we moved in together and one weekend morning he suggested that we should have his pancakes. I sat down and waited for my fabulous pancakes. I realize that he's looking at me....waiting for something. He says "Aren't you going to make the batter?" Huh? I said "I thought you made the best pancakes ever??" Apparently, he FLIPS the pancakes the best.

So.....without hubby here, how will my pancakes get flipped correctly?? 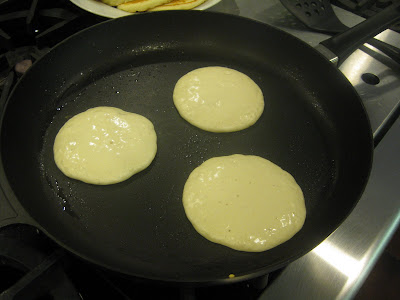 I think I did alright. :) I'm sure he would disagree. 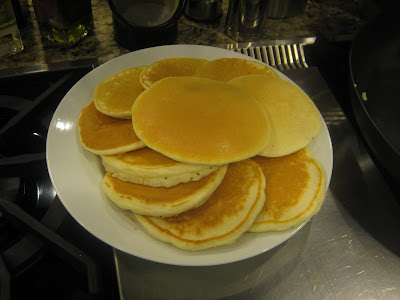 I took the kids to the daycare at my gym and went to spin class. We had a substitute today (she's actually my Monday Cardio Muscle instructor) and she kicked our booties! Nice! Love leaving the gym a sweaty beast.

Remember when I said last night that I was out of Greek Salad.....you probably thought "Oh good! I won't have to look at the those dang Greek leftovers anymore!" Wrong!!!! 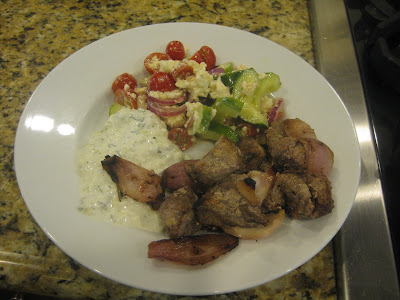 I realized that I had extra feta, red onions, cucumber and some grape tomatoes. I also saved some extra Greek dressing. I threw them all together and BAM.....Greek Salad part 2! Alongside more lamb kebob and tzatiki....I was a happy girl. I have enough lamb for one more meal FYI. :)

After lunch, we piled in the car and made our way to my mother in law's house for swimming and a barbecue. Some family was in town so we enjoyed visiting and eating. I didn't take a single picture of the food. Bad blogger. There were too many kids and too much going on honestly. I ended up kind of eating bits here and there as I went along. I had some chips and onion dip, bbq steak and some Costco Margharita pizza. I brought the rest of the Baklava and layered brownies and had a bit of both. I also had two glasses of wine.

We just got back a bit ago and the kids are fast asleep in their beds....that's where I need to be...in bed! This post was a lot longer than I planned it to be....Good Night!