Last night we attended an engagement party for a couple of friends at the La Jolla Country Club. I had never been before and it was beautiful..gorgeous views of the ocean! As soon as we walked into the room, we were offered a glass of champagne: 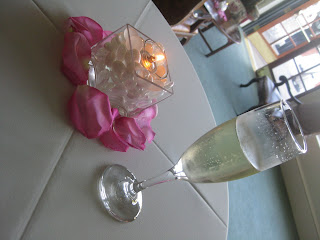 There were beautiful pink umbrellas on each table: 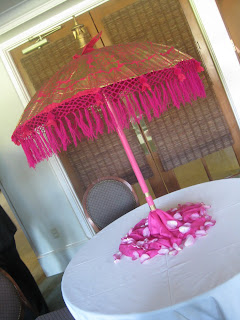 They had delicious passed appetizers: 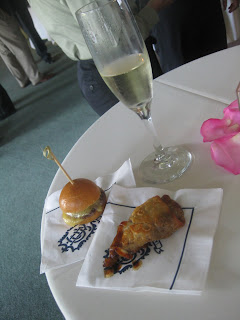 I had a couple of each: mini burgers, duck confit spring rolls (my favorite)....unpictured were tuna tartare and coconut shrimp. I had a couple glasses of champagne before I switched to Chardonnay. I didn't end up finishing my wine....I think I was all wine'd and food'd out believe it or not! We had fun catching up with friends and are excited for the wedding which is in two weeks!!

This morning we were up bright and early to get ready for my son's FIRST day of kindergarten! Tons of pictures were taken this morning! I have to eat breakfast now an hour earlier than usual because my son starts school at 8AM instead of 9AM (UGH!) so I needed something to stick with me. I didn't have time for eggs so I decided on Fage yogurt with Fiber One cereal and blackberries: 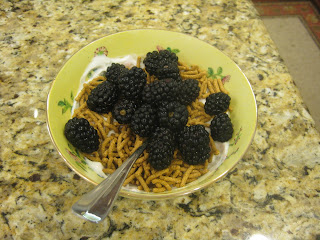 Just as I was gathering up lunch boxes to put in the car, in walked my mom!!! She lives two hours away! Hubby had arranged last week for my mom to come and surprise me and the kids this morning!!! I was beyond shocked and excited! My mother in law also happened to be at my house because she went to Sea World with my sister in law and her kids yesterday. I thought she was leaving early this morning to go home but she wasn't after all....she was here to come with us to go to school too! My son was so excited!!!! I have the best husband. :)

We took my son to school....everything went well and he was excited to see some of his old friends and to meet some new ones! We stuck around for a little bit to make sure he was settled and then took my daughter to her camp for this week. She doesn't start school until September 13th so I wanted her to have something fun to do this week while her brother was in school.

My mom, mother in law and hubby went to lunch at our club. I ordered the Greek Chicken Salad: 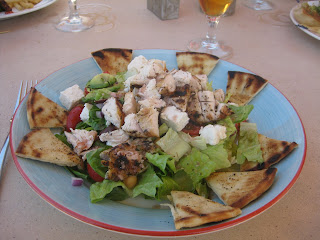 It had chicken, feta, cherry tomatoes, kalamata olives, red onions, chickpeas all tossed with a lemon oregano vinaigrette. On the side were wedges of pita bread. It was delicious!

We came home for a bit and my mom had to go home so she left. My mother in law and I went to pick up my daughter from camp and now we are chilling at home until it's time to pick up my son from his first day at kindergarten. We are then going straight to my sister in law's hotel to go swimming and have dinner.

My iphone is dying and I was originally going to wait until all the bugs were worked out on the iphone 4 but I really need a new phone and don't want to pay to repair my old one (I have the original iphone) so I think I may take the plunge and get the new one.
Does anyone have the new iphone? Do you like it?
Email Post
Labels: Fage fiber one