Last night's Bunco was a "great success" (Borat voice). It was a ton of work but the results were worth all the effort. Bear with me...I have a ton of pictures! But first let's rewind to yesterday's breakfast.

I incorporated the Tomato Feta Salad that I made the other day into some egg whites and ate it with a slice of wheat toast: 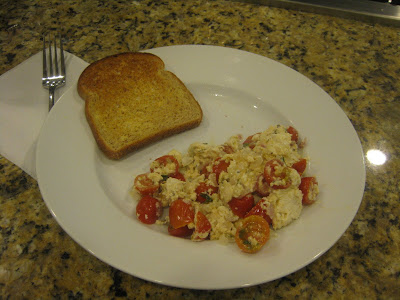 I took the kids to camp and then went to spin class. After I got my sweat on, I came and changed and started prepping for Bunco. Lunch time rolled around so I used the rest of the tuna salad I made the day before and grilled it in a whole wheat tortilla with some shredded cheese. I put some watermelon on the side: 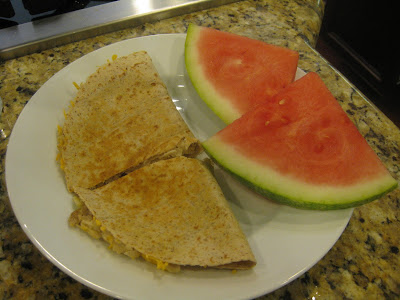 After this picture was taken, I realized my tuna melt needed a little zip....I put the rest of the guacamole on my plate and ate it with that. Yum! I was too full to eat the watermelon so I put that back.

My theme for the Bunco menu was Greek. I was inspired by an episode of Barefoot Contessa where she made an entire Greek meal. Ina Garten never steers me in the wrong direction. Even thought I had never made any of the recipes, I trusted that they would be excellent. I made everything except for the dessert. I decided to roll with Baklava instead. After a little research, I decided to go with this recipe. After tons of layering phyllo dough, butter and walnuts, my pan looked like this: 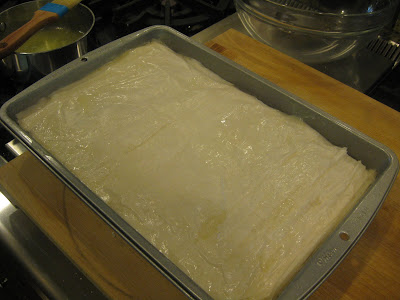 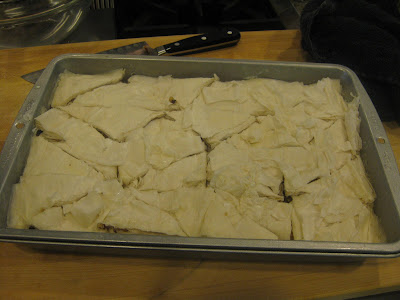 So far so good. Into the oven it went. I made the honey syrup that goes over it. Once it came out of the oven, I poured the syrup over it and voila! 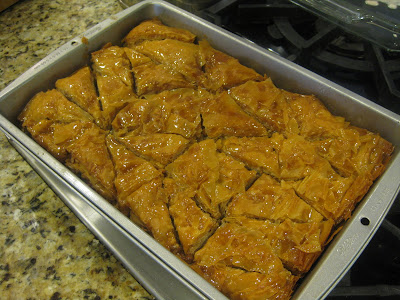 Looks good right? After letting it cool, I tried one. OMG. I could normally care less about Baklava. This one....blew my mind. At that point, the hubby comes home. He doesn't like baklava but I make him take a bite. He ate the entire piece. Fabulous. It was labor intensive for sure but worth it. Wow.
Next it was time to marinate the lamb and chicken. I used the recipe for the Marinated Lamb Kebabs and used the same recipe for the chicken. Here's the lamb all done: 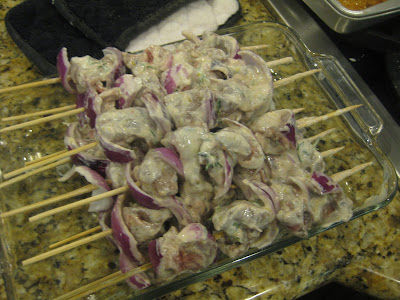 After everything was prepped, I began plating everything. The Baklava: 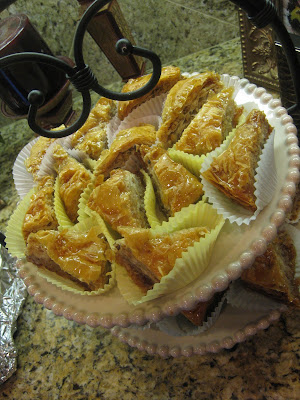 I made brownies with layers of brownie, toasted pecans, caramel, white and milk chocolate chips: 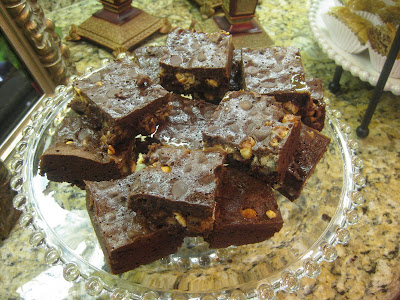 Greek Tomato Feta Salsa in the awesome "Martini Glass" I bought at World Market a few weeks ago: 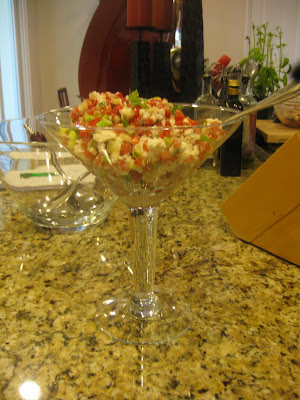 I love this "salsa"! I served it with pita chips like I did the last time I made it.
Greek Salad: 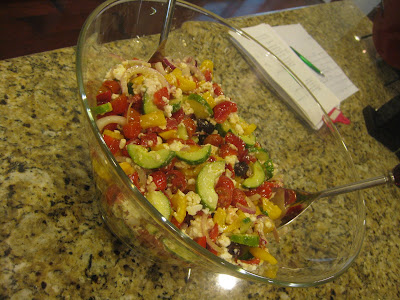 This salad was so delicious!!!!! To die for. I love you Ina Garten!

I then set up the backyard for the party. The desserts: 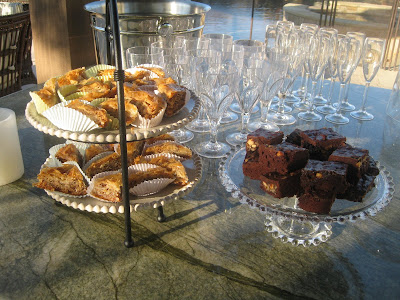 The table with a candle centerpiece: 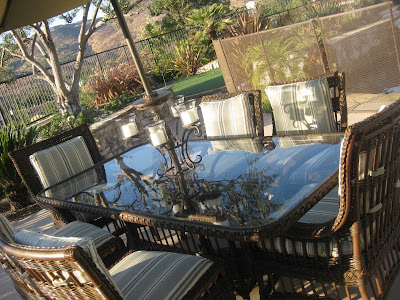 Water Dispenser and an array of glasses: 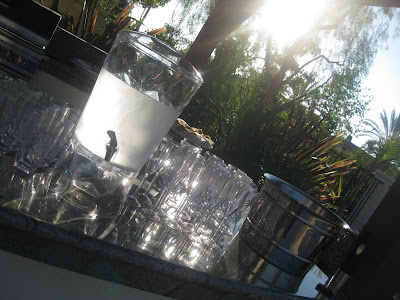 More tables and candles.....check out the cool kid's cars in the background: 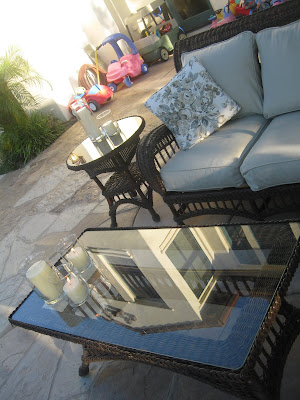 Awhile back, Ryan from POM Wonderful sent me a case of pomegranate juice. I had a couple of bottles left so I decided to mix a cup of it with a bottle of Prosecco. Thanks Alicia for the idea! 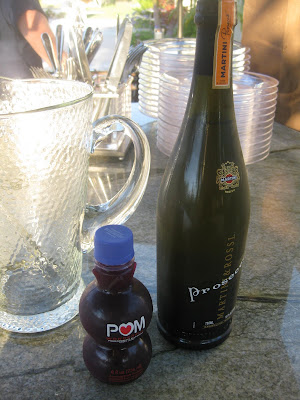 It was delicious! Not too sweet at all (I don't like sweet beverages of any kind).

Everyone started to arrive. I got the grill fired up and turned on the oven for the Spanakopitas. My friend Nora helped me grill all the meat. Check out these beauties: 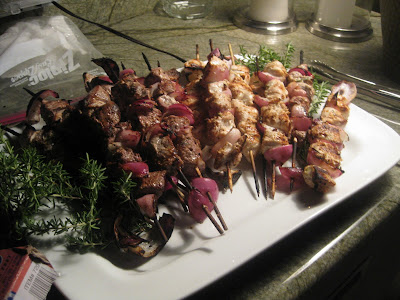 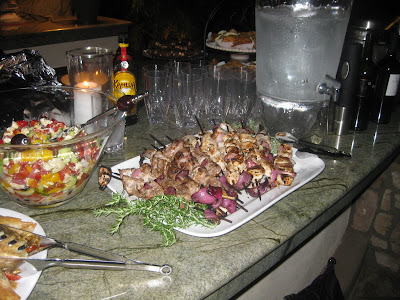 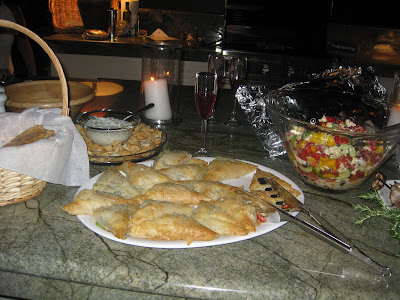 I was a little worried about them since I had made them ahead and frozen them. I defrosted them, brushed them with butter, sprinkled with salt and put them in the oven. They were perfect....absolutely perfect.

I took a picture of my plate but I don't know what happened to it. I had a lamb kebab, pita bread (that I brushed with olive oil and threw on the grill), Greek Salad and Tzatziki Sauce. I guess I didn't get a picture of the tzatziki either but it was delicious! Have I mentioned that I love Ina Garten?
Here we all are: 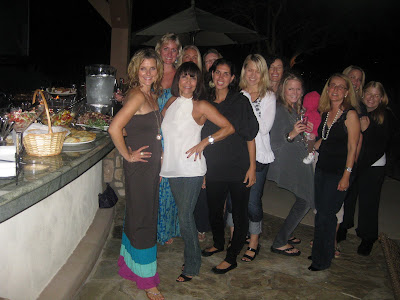 I'm the one in the brown dress on the left in case you didn't know. :) Lisa was fabulous enough to take the picture. She took a ton of other pictures during the evening so hopefully I can share those with you soon! What a fabulous evening! I'm really getting the hang of prepping and doing things early. Less stress that way. :)
Thank you to all my friends who helped clean up last night. Bringing all that stuff into the house takes forever but not when you have that many hands. :)

After less sleep than I'd like, I got up and got on with my day. :) Breakfast was an English muffin with Barney Butter and a side of watermelon: 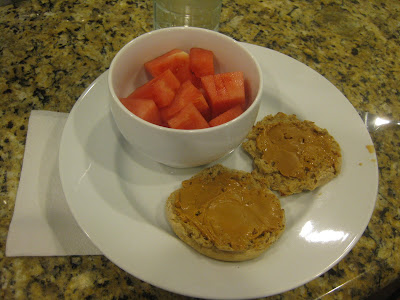 I took the kids to camp and then went to Zumba. I came home and cleaned up, did some more clean up and other random stuff. Hubby is leaving today for a trip for a few days and decided to take me to lunch. We tried a restaurant near us that recently changed it's name and menu: Miguel's Cocina. We decided to sit on their outdoor patio. It was a beautiful day!

Because I didn't have enough wine last night (Not!): 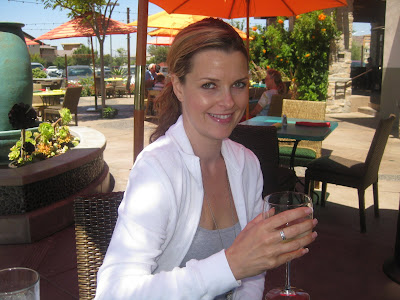 I ordered the tostada with shredded chicken: 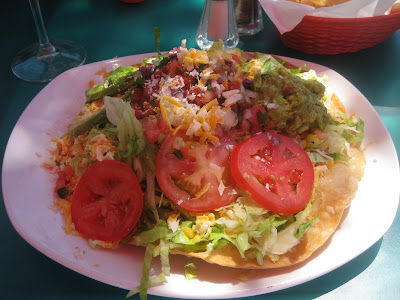 I ate everything except the tortilla shell. It was pretty good! I will go back for sure.

Afterwards, I got my nails done. :) I am going to grab a coffee with Lisa soon for a little bit. I'm excited to heat up some of last night's leftovers for dinner! YUM!!

Who's your favorite celebrity chef? I bet you can guess mine. :)
Email Post
Labels: Barney Butter Bunco Miguel's Cocina Zumba