I really enjoyed my breakfast this morning. I microwaved some egg whites until they became a "puff" and put them on a wheat English muffin with some Cholula, low fat Swiss cheese, spinach and tomato slices. I had some strawberries on the side: 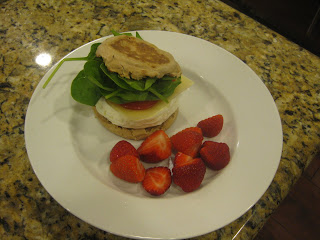 After taking my son to school and my daughter to camp, I went straight to the gym. Since Zumba is cancelled this week, I did 45 minutes of walking/running on the treadmill. I came home and showered and cleaned up around the house.

For lunch, I had the rest of the tuna salad I made in a whole wheat tortilla with mustard, lettuce and tomato. On the side I made a salad tossed with balsamic vinaigrette: 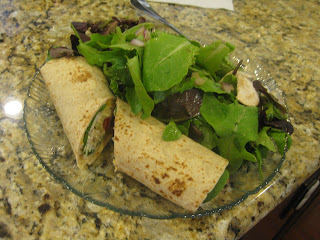 I was feeling like something sweet afterwards so I had a piece of the pound cake I made over the weekend: 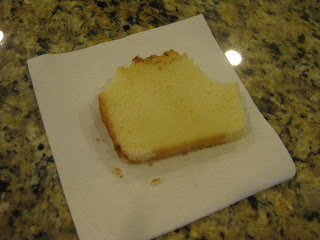 That cake is seriously to die for. I wish somebody here would finish it so I don't have to keep looking at it every time I go into the kitchen!

I picked up my daughter from camp, came home and caught up on some email. We went to pick up my son from school at 3. Since then, I've been paying bills and trying to organize my desk (again). How do these things pile up so fast?

Tonight I have Ladies Night (!!) at a Mexican restaurant so I wanted to have a snack to hold me over. Something filling so that I won't (hopefully) attack the chip basket like a hungry beast. In comes peanut butter: 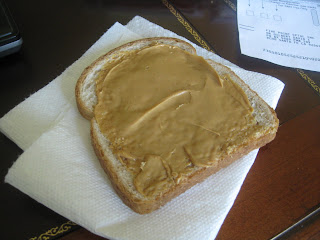 Hopefully it will do the trick!

How do you like tuna salad (if you eat it)? I like mine the old school way: with mayo, celery and red onions. I like there to be yellow mustard on the bread too. I thought that sounded weird at first but it's really good!
Email Post
Labels: Cholula peanut butter