What's with the weight gain huh?? Could it have been the bacon in my pasta last night??? :)

I had such a good time with my sister in law last night. We went to Trattoria Acqua in La Jolla for dinner. It was a little hidden gem that my friend Dina recommended...thanks Dina!! It was such a cute restaurant....we felt like we were in Napa Valley or something like it. When the bread basket arrived, I couldn't say no. The bread was warm and spongy on the inside, crunchy on the outside. It came with hummus. 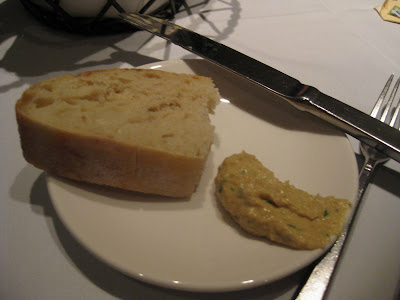 I was able to stop at one piece though! It was hard! I did indulge in two glasses of Cabernet. My appetizer was the tuna tartare. I'm a big sucker for tuna tartare. This one was good!! It did have an over abundance of avocado but I'm not complaining. :) 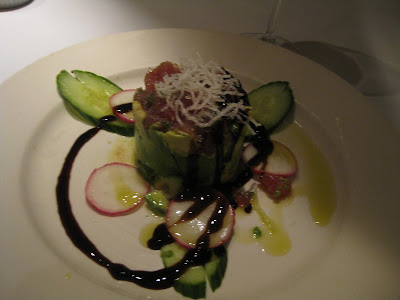 My entree was the Linguine with Spicy Shrimp: 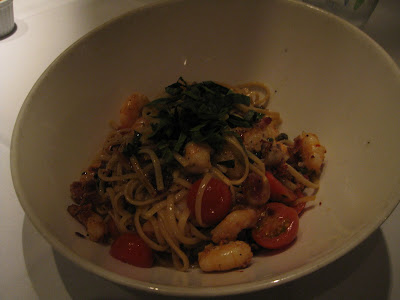 So good....it had Italian bacon. Very decadent and delicious! No dessert although I was tempted!
Breakfast was Barney Butter on a light wheat English muffin and a side of cantaloupe: 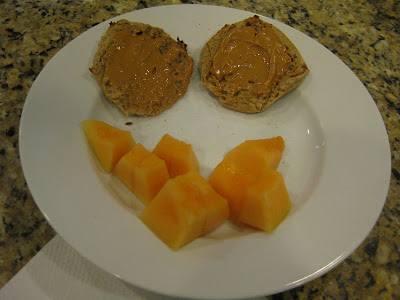 I took the kids to school and went to Zumba again. It's so much fun I can't help myself. Today is "rest week" in P90X. It doesn't mean you actually rest but the videos are not as intense and focus more on stretching and yoga. Today's video was the Yoga X video so I decided that I could do both today and not kill myself. It worked out quite nicely actually....I was all warmed up from Zumba. I was able to hold the crane pose for 12 seconds today...a personal record! After class and before Yoga, I had an apple on the way to Lisa's house: After Yoga, Lisa and I went to grab a quick lunch at Subway: 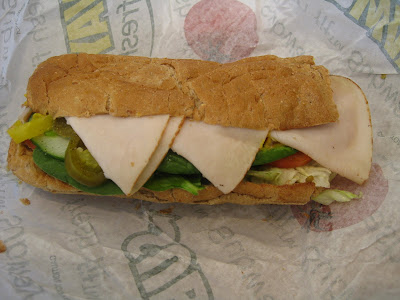 Then it was time to come home, get changed and take the kids to a doctor appointment. I came home and had some unpictured Progresso Light soup and a few peanut butter pretzels. I'm waiting for the hubby to come home so I can make dinner. I'm trying another new Trader Joe's product tonight. Have a great evening!
Email Post
Labels: Barney Butter P90X Progresso Soup Trattoria Acqua Zumba