So last night's dinner was one of my favorite Trader Joe's items: Orange Chicken. I served it with their microwave brown rice and broccoli. I put a bunch of Sriacha sauce on the rice. You know I like it spicy! :) 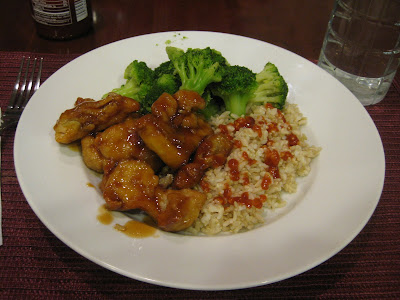 I had a rude awakening though....my hubby commented he couldn't believe that all that food was the point value I have been stating all this time. So I check out the package again and he was right. :( The sauce wasn't included in the nutritional info and I was estimating the serving size wrong. I was seriously bummed out. I thought I was going to have all these points left over for granola. Nope. Instead I went with a one point Weight Watcher chocolate cake (one of the new things I bought yesterday): 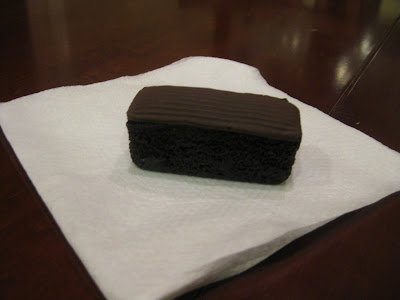 It was pretty decent for one point. But I was still bummed out.

This morning's breakfast was Fage yogurt with Fiber One cereal and strawberries, blackberries and raspberries: 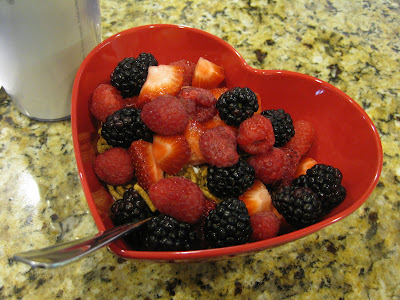 I took the kids to school and went to Great News for a cooking class. Today's class was called Pacific Rim Favorites.

First up was the Crab Spring Roll with Pickled Ginger Sauce: 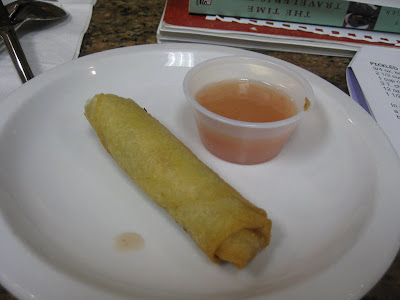 It was good!! What's not to like about a spring roll though?

The next one I thought I wouldn't like because of the fruit (you know I don't like fruit with my food). It was entitled Spicy Strawberry, Napa Cabbage and Spinach Slaw with Crunchy Almonds and Ginger Sesame Dressing: 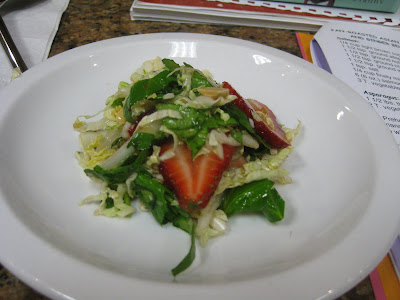 I liked it! I didn't mind the strawberries in it! I loved the crunchy almonds in it.

Next up was Pan-Roasted Asian Rubbed Salmon with Asparagus and Ginger Beurre Blanc: 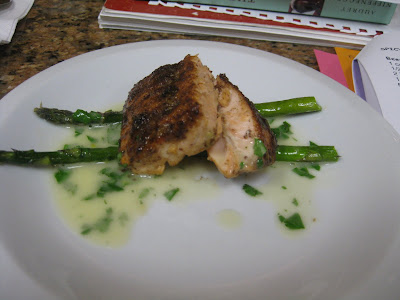 This was really good! The salmon had a sweet rub on it that caramelized.

The next one was my favorite: Spicy Sesame Lime Marinated Top Sirloin with Ginger Cilantro Noodles: 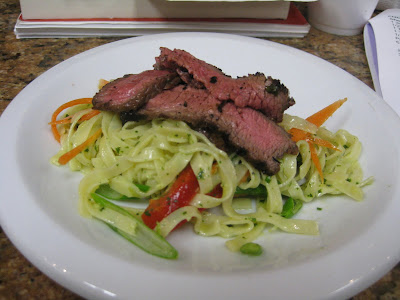 This might well be the best marinated steak I've ever had. And the noodles were so good. ahhh.

Dessert was Coconut Shortcakes with Tropical Fruit and Cream: 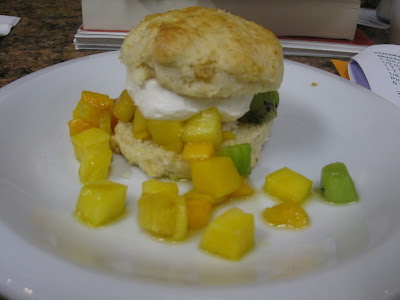 Mmmmm......yummy little sammies of fruit and whipped cream...what's not to like? Great class today as usual!

I had to run over to Nordstrom to buy a gift, then I came home and chilled for a bit before it was time to head over to Lisa's for P90x. Today's video was Kenpo. Not too much to report there...it's not a super hard video.
Now it's time to get dinner ready and all that good stuff. See ya!
Email Post
Labels: Fage fiber one Great News P90X Sriacha Trader Joes Weight Watchers