I pulled out something labeled "Chicken & Rice - Hubby didn't like" out of the freezer for my dinner last night. I thought it was appropriate since he wasn't going to be home for dinner. 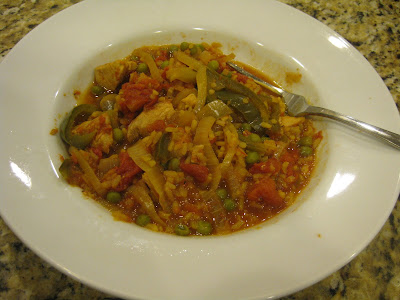 I have no idea where this recipe came from. I guess I need to write on my labels where the recipe came from. I digress....this was just ok. I did put Cholula all over it which made it tastier of course but I'm not sure if I want the last serving. Oh well.

Now dessert was something I was excited about! Chocolate Cheerios with chocolate almond milk: 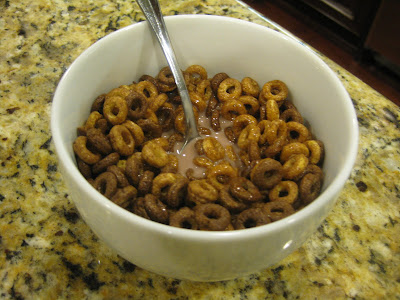 I decided to do the YogaX video from P90X last night. Lisa and I couldn't coordinate a time to do it today so I figured it would be better to do it after the kids went to bed than try to do it today while they were running through the room. It's a 90 minute video and I knew I'd be up later than I like and with the time change approaching, I was a little nervous about the situation. But after a few minutes, I actually began to enjoy it. It was quiet, the room was warm and the lights were turned down low. The only problem...I was really hungry afterwards. I thought about just going to bed but I knew I wouldn't be able to fall asleep with my stomach growling. So I made a quick turkey sandwich with mustard on light wheat bread. Ahh....much better!!

I decided to recreate yesterday's breakfast. The only change I made was that I put salsa in the eggs. 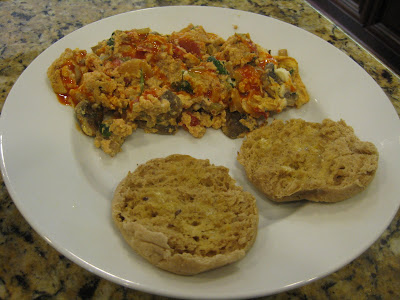 I think I liked it better without the salsa. It made the eggs more watery and they didn't come together how I like. Still yummy though!

Then it was off to a birthday party for my daughter's classmate. I had a couple bites of my son's pizza to make sure it was good as well as a bite of his cupcake. They were good. :) I came home and made lunch: chicken salad wrap. I did a little experiment and put plain non fat yogurt in the chicken as well as celery, pickle relish, tomatoes, red onions and garlic salt. It was missing something....cayenne pepper. Much better! 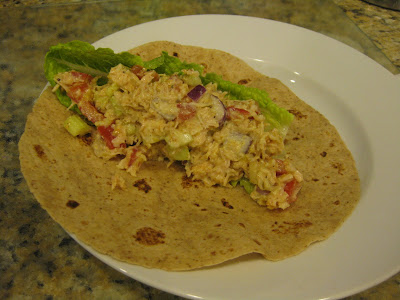 I put in on a piece of lettuce on a wheat tortilla. It was really good. I have to admit that I put Cholula on each bite. I'm addicted.

I did some random stuff around the house and when 5:00 rolled around, it was time for a glass of this: 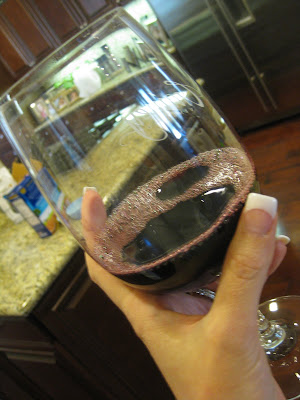 I decided it was too early for dinner (heck - technically it was 4:00!) so I had some Progresso light soup: 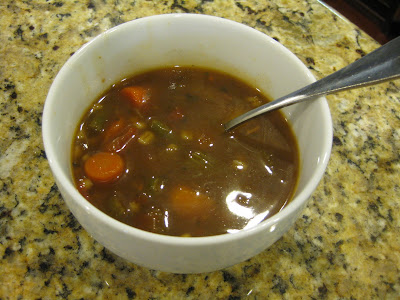 An hour and a half later I heated up my dinner: Hungry Girl's 10 Alarm Chili over whole wheat spaghetti: 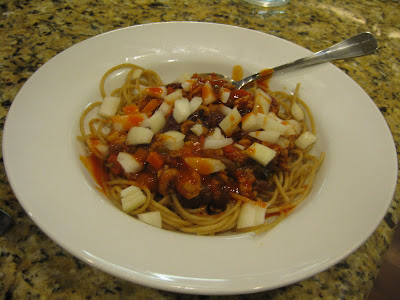 I threw some diced onion on top. And before I remembered how spicy it was, I put Cholula on top. Oops.....not really....it was fabulous. That is all she wrote folks. About time to get the kids to bed. I hope everyone had a great weekend!
Email Post
Labels: almond milk chili chocolate cheerios Cholula P90X Progresso Soup