Champagne and Desserts Oh My!!! Oh well….I guess that’s what the holidays are all about right? :)

Yesterday morning at the hotel, I went to the club room for breakfast and to catch up on blogging. Hubby had a meeting so I got to relax for a little while. I had a small bagel with lox, cream cheese, tomatoes and onions as well as some pineapple, salami and cheese. They made me a delicious nonfat vanilla latte as well! 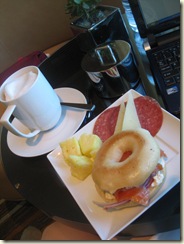 I went back  for some yogurt with granola and berries: 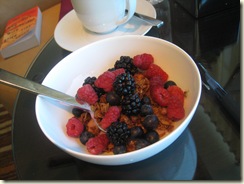 When they asked me if I wanted some champagne, how could I say no? 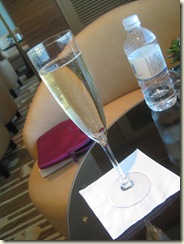 I packed up and we left the hotel. On the way back to San Diego, we stopped at The Cheesecake Factory in Irvine for lunch. Hubby and I split the Spinach Artichoke Dip: 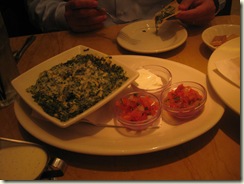 I order the Santa Fe salad: 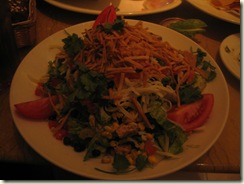 I also had some of their fabulous brown bread! Love that bread!

We got home just in time to change and then pick up our friends and then we were off to the Charger Monday Night Football game! 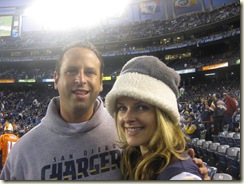 I ate some nachos and a slice of cheese pizza along with a glass (plastic cup) of wine. The Chargers won….what a great game!!

This morning’s breakfast was Fage yogurt with Fiber One cereal and strawberries: 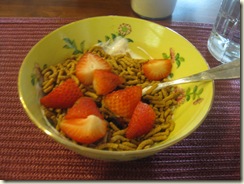 I took the kids to school and then it was off to Great News for a cooking class. Today’s class was entitled: Holiday Appetizers.

There were three appetizers on the first plate: 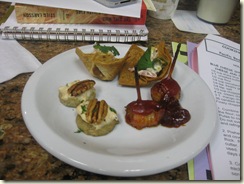 The two at the top were Chipotle Shrimp, Corn and Red Pepper Cheese in Tortilla Cups. These were awesome! The filling would be great as a dip!

The two on the right were Water Chestnuts Wrapped in Bacon Baked in Sweet Sour BBQ Sauce. Anything wrapped in bacon is good….even water chestnuts which I’m not a fan of.

The two on the left were Blue Cheese Shortbreads Topped with Chutney Cream Cheese and Candied Walnuts. These were off the hook! LOVE! 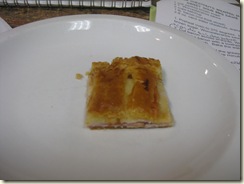 Love this! I make a very similar Barefoot Contessa recipe that everyone loves. I think the only difference is that this recipe had turkey where the other does not. I liked the addition of turkey!

The next plate has two recipes: 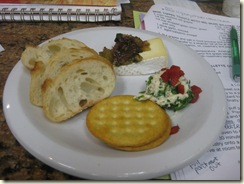 The one on the top/left was Brie Topped Toasts with Red Grape Balsamic Salsa. I didn’t think I’d like this one because of the grapes but I was wrong….it was delicious! The other recipe was my favorite: Cheese Wreath with Bacon and Smoked Almonds. The instructor shaped the cheese part in a wreath on a plate and topped it heavily with parsley and roasted red peppers in the shape of a bow so the whole thing looked like a Christmas wreath. Not only was the presentation beautiful but it tasted just as good as it looked if not better!

After class, I picked up the kids from school, did the last of my Thanksgiving grocery shopping and came home.

I just finished making my brine for the Thanksgiving turkey. I’m doing Alton Brown’s Roasted Turkey this year and I’m excited about it! Have you ever tried it?

Have you ever brined a turkey before? This is my first time brining a turkey although I have brined a chicken before.