You all know I love to eat. On my trip to Atlanta, I took it to a whole new level. I really did the title of my blog justice. Have fear my scale, I’m coming to stand on you soon!

Saturday my family met up for lunch at Olive Garden. We had the standard salad: 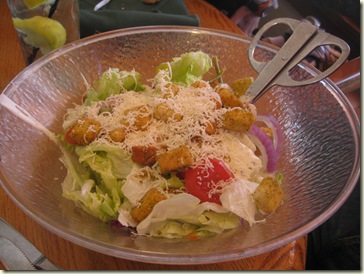 I ordered the spaghetti with meat sauce for my entree: 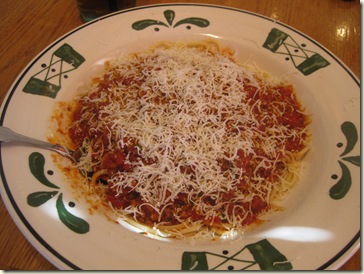 We went back to the hotel to get ready for my niece’s Bat Mitzvah. I did not photograph dinner but it was another buffet of different types of salads and fish. We danced and hung out until late. By the time we left I was hungry so we stopped at Taco Mac. I decided to go for it and order the hottest wings they had: “Death Wings.” 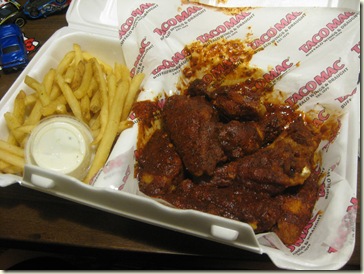 Yes. They tasted like death. Not because they were too spicy but because they tasted horrible. It was as if a pepper mill was dumped onto the wings. I ate a few and called it quits. Just looking at the picture makes me nauseated.

When I woke up Sunday morning, the whole room smelled like the nasty Death wings. I have learned my lesson to now ask if the wings are buffalo flavored, not death by black pepper.

Breakfast more than made up for the lousy wings. We met at Dogwood Terrace for brunch. There was a buffet and a menu to order from. I had a small biscuit and gravy from the buffet while I waited for my order to arrive. Behold Crab Eggs Benedict: 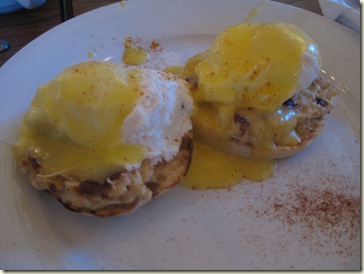 They were GLORIOUS. I was in love.

We all hopped into our cars and made the 1 1/2 hour drive to Chattanooga, Tennessee. We stopped at Rock City and were able to stand in a spot where you can see seven states at one time: Tennessee, Georgia, North Carolina, South Carolina, Virginia, Kentucky and Alabama.

We stopped for a coffee break at Starbucks. It was really cold out so my latte really hit the spot. 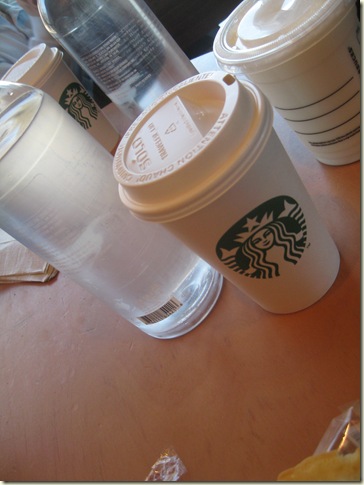 On our way back to our hotel, we stopped at Sugar’s Ribs for dinner. 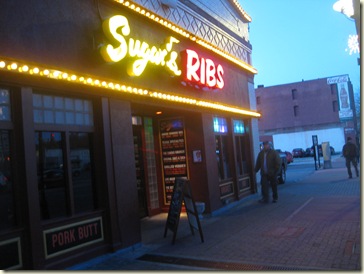 I ordered the barbeque chicken with vinegar slaw. 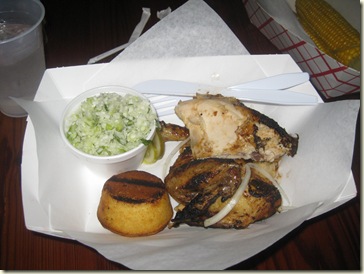 It was delicious! There was an assortment of different sauces at the table to try. My husband’s white chicken chili was probably the best chili we’ve ever had. I also enjoyed an ear of corn as well.

We finally made it back to Atlanta. One of my brother in law’s wanted to pick up Five Guys burgers and fries and bring them back to our hotel. I’ve never had a Five Guy’s burger so how could I say no! Fortunately one of my other brother in law’s offered to split a small cheeseburger with me so the damage wasn’t as bad as it could have been. 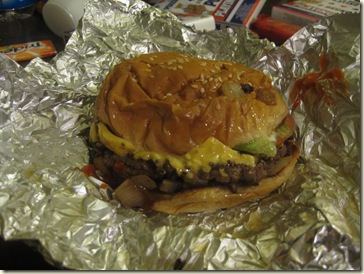 Verdict: a delicious burger! I got it with everything: sautéed mushrooms and onions, lettuce, tomatoes and pickles. Is it better than In N Out? No….but I think it’s an entirely different type of burger so I’m not sure it’s fair to compare the two. I will say that the fries are MUCH better at Five Guys!

We’ve stayed pretty much on California time this entire trip. So breakfast has not happened. We are usually ready to roll by 11:00AM (8:00PST) so it was straight to lunch after we got up and packed this morning. We all met at Provino’s Italian restaurant. 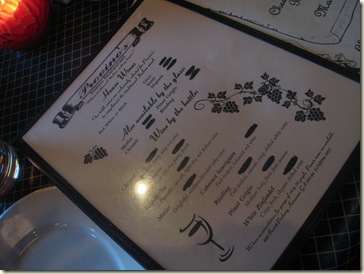 My brother in law who lives in Atlanta loves Provino’s so I was excited to try it. It did not disappoint.

Our meal was served with salad with their house dressing that was simple, yet amazing. I could have just eaten this salad as my meal and been just fine. 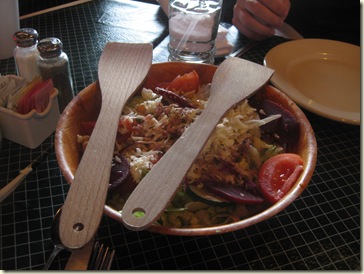 Then the garlic rolls from the heavens arrived. 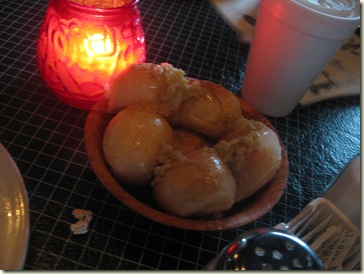 These babies were doused with melted butter and tons of minced garlic. Once you got to the bottom of the bowl, there was a pool of melted butter. Holy heart attack. But let’s get real: they rocked my world.

By the time my spaghetti and meat sauce arrived, I was pretty full. 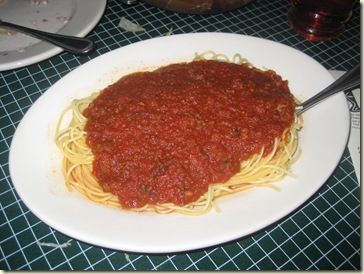 I still managed to make my way through some of it. I figured: better load up….you’re not going to eat like this when you get home!

Then it was off to the airport we went. Now I’m on the plane headed home. My diet officially resumes tomorrow. I can only imagine what I weigh after this trip of decadence. It was fun though!! :)

Have you ever had a Five Guy’s burger?

What is your favorite fast food burger?