Last night was Bunco. Normally we meet at a friend’s house but we decided to meet at a restaurant for this month since it’s so close to the holidays. That way no one would have to stress about it. We decided to try a brand new restaurant that opened nearby: Sushi on the Rock.

When we arrived at 6:30pm, it was packed. I mean, PACKED. They don’t accept reservations but my friend had called ahead a few weeks ago so they knew we were coming…well, I think they had forgotten. The restaurant is really small and there were 15 of us. We had to wait about 45 minutes for some tables next to one another to open up. I felt really bad for the staff there….I don’t think they expected it to be so busy….they just opened a week ago!

The owner got us some wine while we waited and eventually we were seated. After another long wait, we finally ordered and began to relax. My friend Cathi and I split a bunch of stuff. 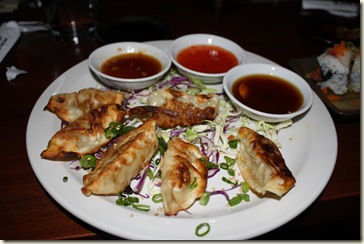 The potstickers were really good.

Next up was the sushi. El Jefe Roll (Spicy tuna, cucumber, avocado and sprouts layered with yellowtail, masago and green onions drizzled with a garlic ponzu): 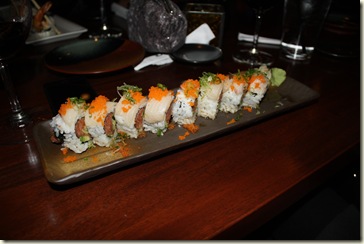 This roll was pretty good but nothing amazing. 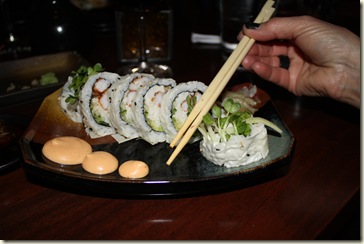 Eh. This roll was weird. We couldn’t put our finger on what exactly was wrong about it…it was just bland and weird. 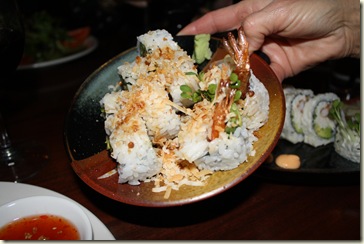 I liked this one better than the last one but it’s nothing I’d need to order again.

A few of us split a couple of desserts. This is where I felt like my meal took a turn for the better. :) 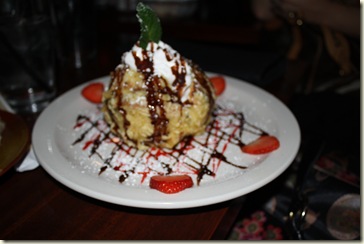 Not as impressed with this one but everyone else was raving about it.

Overall I was not impressed with the new Sushi on the Rock. I do realize that they have only been opened a week and need to work out their kinks. I wish them luck…they sure were popular last night!

This morning I decided it would be a “healthy eating day.” I haven’t seen much of those lately so I thought it would be a nice change of pace. :) Breakfast was Fage strawberry yogurt with strawberries and blackberries: 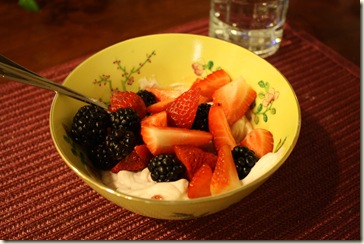 I took the kids to school and went to Starbucks to do some work. 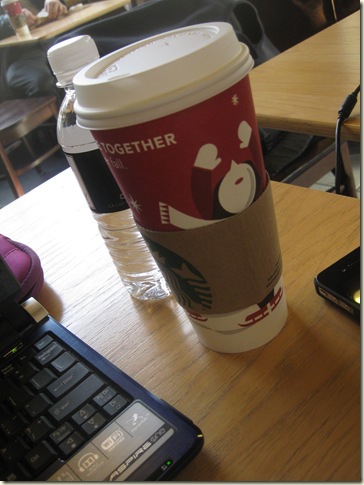 I went to a meeting at the school, then a doctor appointment, then I stopped at  Subway for a quick lunch: 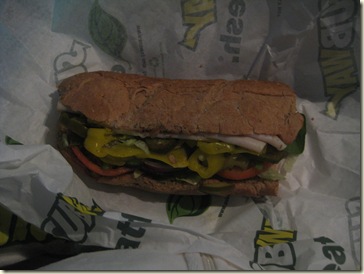 Turkey Melt on wheat. I normally just order the turkey without cheese but I saw the melt was only 40 calories more so I went for it.

Then it was off to my dentist appointment and then to the school to get the kiddos.

I spent the rest of the afternoon packing. We are all leaving for Atlanta tomorrow! It’s my niece’s Bat Mitzvah this weekend.

Since we are not coming back until Monday, I really need to use up the produce in my fridge. I made a “use it up” salad for dinner. 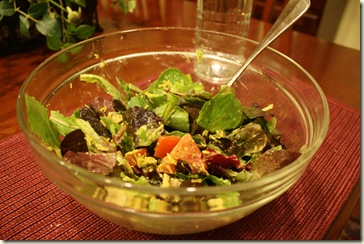 I need to finish packing and go to bed. Early flight tomorrow from Orange County. See ya from the other side of the country!