If you follow me on Twitter, you know that I was excited for my dinner last night. It was a recipe for Campbell’s Skillet Cheesy Chicken & Rice that I ripped out of a magazine. And it involved….Gasp….a can of Cream of Chicken soup. I know some of you just fell off your chair and fainted and I’d help you up but since I can’t I’ll just tell you about the recipe. 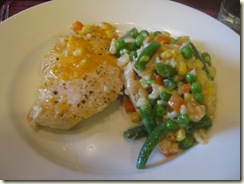 It just looked so good in the picture…the rice looked really creamy and the chicken looked perfect.

Well….it was kind of bland. I tried adding a decent amount of salt and pepper but the taste just wasn’t there. My husband didn’t really like it and asked what I thought. I said: “it tastes like something kids would eat.” Now going back and looking at the recipe online, I noticed one of the reviews of the recipe said: “It’s something my picky 8 year old would actually eat.” ‘Nuff said.

Fortunately, dessert was good! My son wanted brownies so I leafed through all my brownie recipes and decided to try a basic one. Can’t go wrong with a recipe entitled Absolutely Best Brownies right? 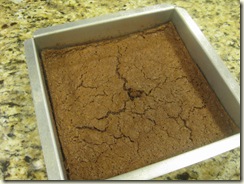 The recipe called for self-rising flower but I didn’t have any. Instead, here’s a substitute for 1 cup self rising flour:

And here’s a great list of ingredient substitutions that I found on Joy of Baking! 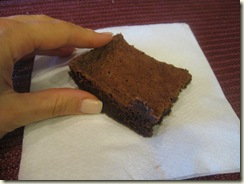 The brownies were awesome! The tasted like a box brownie mix (which I love!) and were super easy to put together!

Breakfast this morning was a toasted waffle with Teddie peanut butter and some watermelon. 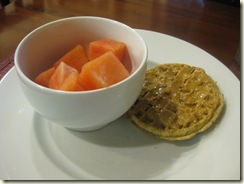 I’m out of my beloved cinnamon waffles so I’m using my Nutrigrain ones. I like the cinnamon ones better. :(

I took the kids to school and went to Zumba. I ran some errands and stopped at Submarina for lunch. 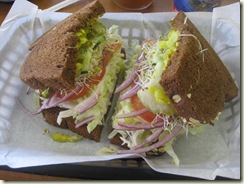 That’s a turkey sandwich on squaw bread (my favorite bread!) with everything on it (except olives). I forgot how much I love Submarina sandwiches!

I picked the kids up from school and came home. Snack was some clementines. 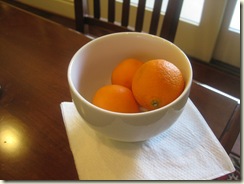 I just finished doing homework with my son. This is his first year doing homework and it’s been difficult. He was ok with it the first couple of days but now he hates it. Welcome to life kid! :)

What’s your favorite kind of bread?

Were you good about doing your homework? I used to be so bad about it when I was younger. My parents actually sent me to a “Homework Clinic” where you stay after school ended and did your homework. Well, one day the school called and said I never made it to the clinic. This was before cell phones so my mom raced down to the school thinking something happened to me. Well….eventually they found me….hiding under a bush. :)