I had an exceptionally good time last night at Bunco at my friend Cathi’s house. I enjoyed a few glasses of wine while I was there. :) 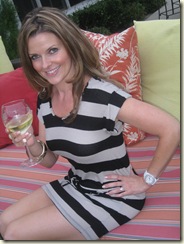 I also enjoyed some delicious appetizers. 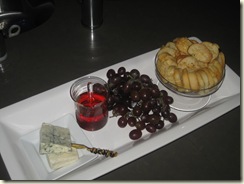 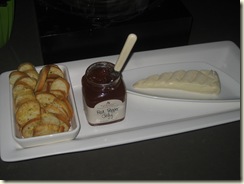 This one I dominated: red pepper jelly spread on some soft cheese and crackers. Delish!

Cathi made her famous muffaletta sandwiches. I love these things! She bakes Pat & Oscars breadsticks, spreads some garlic oil over them and stuffs them with a variety of meats, cheese and an amazing olive mixture. I don’t really even like olives but this stuff rocks. 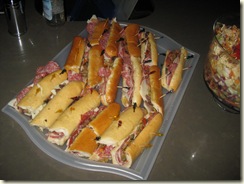 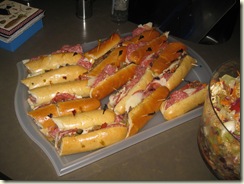 Along with the muffalettas, Cathi made a delicious Asian style salad. Check out her Missoni plates she scored at Target: 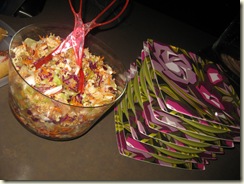 Cathi also made some sweet potato fries. I had a hard time keeping my hands off of them. 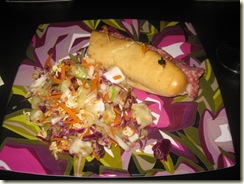 I went back for a second sandwich. I would have had a third but I restrained myself. It was hard.

I did not restrain when it was time for dessert though! 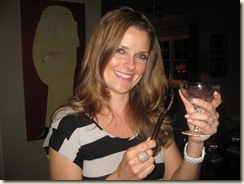 Cathi made this amazing chocolate ganache/peanut butter dessert that made me smile!

So….I drank too much, ate too much and went to bed way too late.  But I had a ball and that’s all that matters!

Breakfast this morning was a toasted cinnamon waffle with Teddie peanut butter and some strawberries. 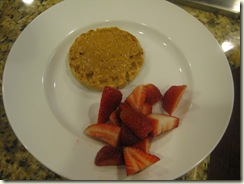 I took the kids to school and went to Cardio Muscle class.  Holy crap. I’m going to be sore tomorrow! We did a series of exercises in a ladder formation. The first one was 20 squats and we did 10 ladders….so I did 200 squats. The second exercise was 20 lunges. I did 200 lunges. I guess it’s payback for all my extra calorie consumption yesterday!

I went to get a spray tan….because I am going to Las Vegas tomorrow! YES! We decided to go last minute to go to the Mayweather/Ortiz fight. I’m excited! Except for the fact that Las Vegas will reek havoc on my diet. Oh well….

After my intense workout, I was starving. I thought about going to Subway but I knew a sandwich wasn’t going to cut it. I needed more food. Enter: Souplantation. 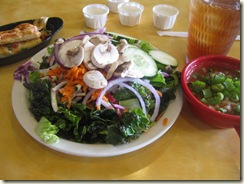 I ate a HUGE salad, a bowl of chili and some of their pizza bread. I splurged on their ranch dressing which is the best ranch dressing on the planet. I ate every single bite and was NOT full. I made myself leave instead of eating more. I knew that I have a calorie heavy weekend coming up so I needed to control myself.

I picked up my daughter from school and took her to her “Dog Smart” appointment. My son is at a playdate so I’ll be picking him up after dinner.

We leave for Vegas tomorrow morning and come back on Tuesday afternoon. See ya from The Strip!

Have you ever had a muffaletta sandwich?

What is your favorite salad dressing?