As promised, I had leftovers last night. But unlike some nights when I eat leftovers, I was excited about it! That’s because I had some more of the delicious Creamy Taco Mac that I made a few days ago. 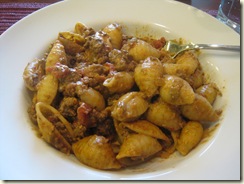 I really enjoyed this dish even reheated. The serving size is pretty big and really filling….two pluses in my book!

Breakfast this morning was an egg sandwich on a toasted English muffin. I spread a wedge of Laughing Cow Garlic & Herb cheese on the muffin. I also had a fabulous bowl of strawberries and raspberries that I bought at Costco yesterday. They were especially good! 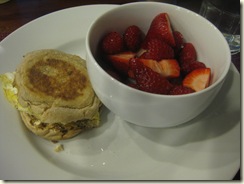 I changed and went to Subway for lunch. 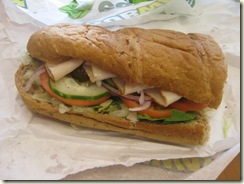 Then it was off to Target. I contemplated stopping for frozen yogurt on the way home but decided against it. I knew it wouldn’t be a filling snack and that I’d be hungry a short while later.

Instead I tried one of my new finds at Target: 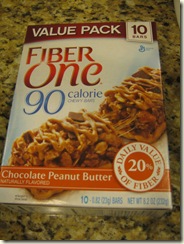 Fiber One Chocolate Peanut Butter bars. I ate one with an apple on the way to pick up the kids from school. 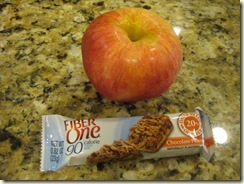 It was pretty good. I liked the peanut butter flavor. The only problem is is that I ate this snack an hour and a half ago and I’m still hungry. The hours between 3 and 5pm are my hungry times. I feel like I could eat everything in site during this time.  I think the problem is that I eat breakfast early (like 7AM) and am hungry for lunch by 11AM. I try to make it until 12 but sometimes I don’t. So by 3 or 4, I’m starving. Oh well, I guess it’s just a game of trial and error on the snacks.

Are you hungrier at certain times of the day?

What time do you eat breakfast, lunch and dinner?