We had friends over last night for dinner. I wanted to make a special dessert. I had big plans. 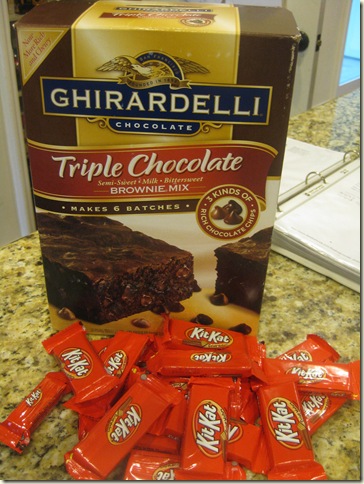 I am famous for my Toffee Brownies (aka Crack Brownies). I have always used the Symphony Candy Bars but have wondered what it would be like to use other candy bars. I looked through my kids’ Halloween candy bags (SHHH!! Don’t tell them!) looking for whatever I had the most of. I was really hoping for Reese’s Peanut Butter cups but there weren’t enough so I decided Kit Kats would do.

Well…..they kind of sucked. The candy bars didn’t really melt and the wafers in them tasted stale and weird. Boo. Lesson learned: do not use Kit Kat bars in these brownies.

Dinner, however, did not suck. Well, at least most of it didn’t. 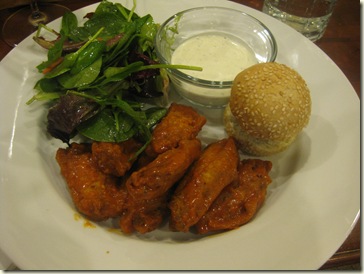 It was hot wing night at our house! You know how I love my hot wings! I made my recipe for Restaurant-Style Buffalo Chicken Wings. As I mentioned the last time I made them, I would like them a bit crispier. I tried this time to flour the chicken wings by rolling them into the flour inside of just sprinkling the flour on like the recipe calls for. I also did not put them in the refrigerator after they were floured to see if that made a difference. They still were not crispy enough. Next time I will flour them the same way and refrigerate them. I may try frying them a bit longer. I don’t think I’m frying them for the 10-15 minutes the recipe calls for. I may have to set a timer to make sure I do that.

I also made sliders using mini buns and mini hamburger patties I found at Trader Joe’s. They were kind of bland. Next time I will butter and grill the buns and season the meat better. I also needed to press down the patties so they wouldn’t turn out as thick and small as they did. Next time!

Regardless, the wings still rocked. The last time I made them I counted the wings I made: 46. For 4 people. There were only 3 left last time. My friend’s husband declared this time that there would be “no wings left behind.” There wasn’t. Other things I heard him say over the course of dinner:

My friends brought over a salad and wine and it all came together as an Epic meal!

Breakfast was pretty good this morning: 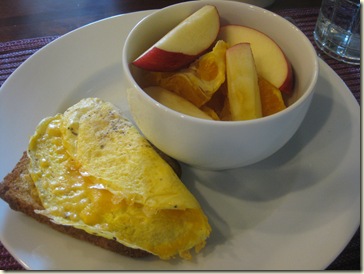 Egg beaters with shredded cheddar cheese on toast along with a bowl of apple & orange slices.

I took the kids to school and went to an awesome spin class. I was in the mood to work out hard this morning! Maybe it was all the indulgences of last night’s dinner? :) 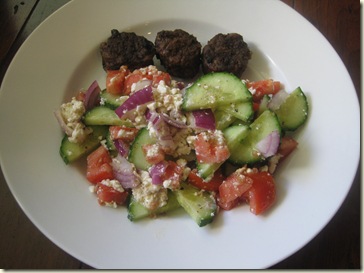 The rest of the dry, over cooked, tiny sliders and another Greek salad. The sheep’s milk feta that I use from Trader Joe’s rocks. I’m completely addicted to it.

I just picked up my daughter from school and will be picking my son up shortly. Tonight is Bunco so I’ll be enjoying some more wine and decadence tonight. Good thing for stretchy pants.

Any tips on how to get my hot wings crispier?

Do you have a favorite burger recipe?  I think I may try making my own sliders next time instead of buying the pre-shaped patties.