I brought the crockpot out on Friday and made something delicious in it for dinner. Buffalo Chicken Chili. As you know, I love hot wings. Anything promising to taste like hot wings is a winner in my book. Plus, one of the ingredients is Franks Hot Sauce. I was sold.

salt and pepper to taste

Add all ingredients to slow cooker and cook on high for 3 hours. Shred chicken with two forks. Done.

It was so good, I had it for lunch on Saturday too! 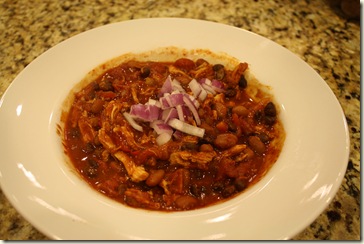 I woke up on Saturday not feeling very good. :( Sniffling, sneezing, all the good stuff. I skipped spin class in hopes that if I rested, my body would feel better. We had a wedding to go to that night and I wanted to be in tip top shape.

I think it worked because by the afternoon, I was feeling much better. Now, the weather….that was another story. It poured rain all day. I kept thinking about the poor bride.

The wedding was held at the Scripps Seaside Forum in La Jolla. A beautiful location overlooking the ocean. I’m sure on a sunny day, it would have been magnificent. My husband and I arrived and he dropped me off in front and I waited for him while he parked.

The ceremony had been moved inside but you could still see the ocean. Even though it was raining, it was still beautiful. When the ceremony ended, I headed to the bar for some wine. There were a couple of passed appetizers but my attention was paid to the cheese table. I wish I had a photograph of it. There must have been more than a dozen different kinds of cheese to choose from. Wine and cheese=best combination in the world.

After a bit of mingling, we sat down to dinner. Check out the cocktail napkin: “Eat, Drink and Be Married!” 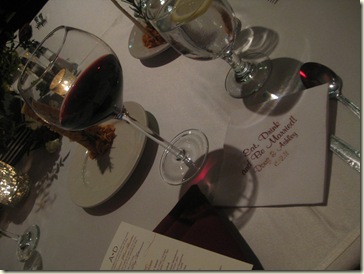 The first course was a Field Green Salad with Baby Greens, Pine Nuts, Feta, Golden Raisins and Balsamic Vinaigrette with an Onion Tart. 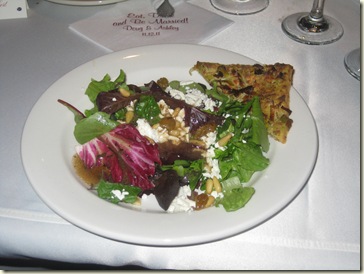 The main course was a choice between beef or fish and I chose the fish. 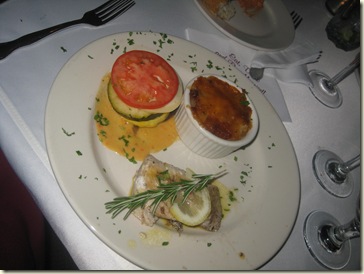 Of course the dessert was my favorite. 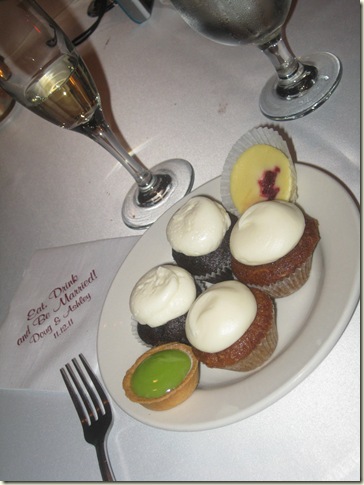 Even though it was raining, the sunset was beautiful. The bride and groom were taking photos outside under an umbrella which I thought was a cute idea.

When we got home, the kids were still up and wired on all the sugar the sitter let them eat. Once we got them into bed, we crashed ourselves. :)

This morning I ate some old bread for breakfast. While trying to eat through my freezer in preparation for needed space for Thanksgiving, I found part of a loaf of buttermilk wheat bread dated two years old. Yes. Two years. I decided to eat it anyway. 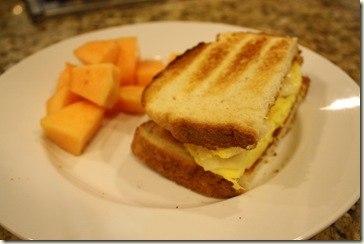 And it still tasted good. So stop making faces at the computer screen.  I know exactly what face that is….the same one my husband made when he saw the date on the bag.  I cooked up some egg beaters and added them, along with a slice of cheese, to my toasted bread. Delish!

Then it was time to get dressed, packed up and head out the door to the train station. I’m going to Los Angeles to visit with my family and celebrate my brother’s birthday. I see some more wine in my future today. :)

On the train, I brought a lunch: 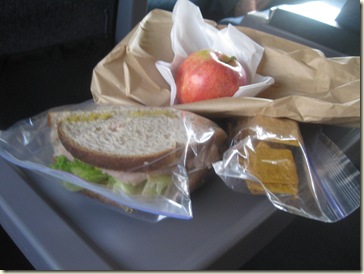 Turkey sandwich, an apple and Wheat Thins. Is anyone else addicted to Wheat Thins like I am? Once I start, I cannot stop.

Enjoy the rest of your weekend!

What are your favorite toppings for chili?

For those of you who are married, what was the weather like on your wedding day? I got married on July 19th in Santa Monica. It started out cloudy but ended up being a beautiful day!