I actually believe that when I eat something it goes into a fiery pit that is my stomach. I feel like food gets incinerated on impact and that’s why I am hungry all the time. How do I put out the raging flames!?!

Before I left for my final birthday party of the weekend yesterday, I snacked on some hummus, carrots and unpictured Wheat Thins. 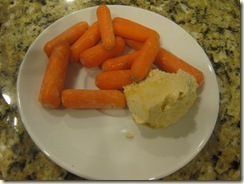 At the party they had sushi from Costco. I couldn’t say no to that. I did say no to the pizza and the cupcakes. I am a strong woman.

When we got home it was dinner time and I wanted to make something quick. I had this in my freezer: 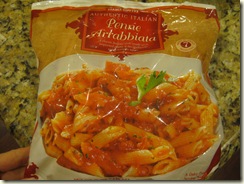 Trader Joe’s Penne Arrabbiata. I think it had been there way too long. It was a frozen rock. When I cooked it, it got a little mushy from trying to break it apart. 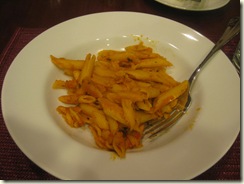 The bag said it was 3 servings. That plate above is HALF the bag. I could eat the entire bag by myself easily. I don’t know what three people this would satisfy….toddlers? Good thing I ate the sushi.

Since I had to run this morning I had my go-to run meal: peanut butter on toast. This time I had some strawberries with it: 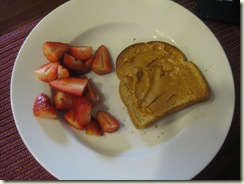 Hubby took the kids to school and I went to Cardio Muscle class. My arms are going to be sore tomorrow. We did tons of shoulder work! Afterwards I took care of my half marathon training: 3 miles of rolling hills on the treadmill. I was a sweaty mess at the end. I don’t know what it is about the treadmill but it’s so much harder! Maybe it was the hill work but I was dying by the time I was done.

I came home to feed the inferno that is my stomach: Turkey and provolone cheese on a sandwich thin with a big salad: 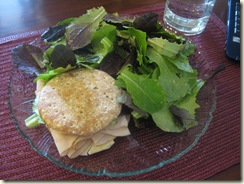 I was not full. Anybody have a fire extinguisher?

I went to pick up my daughter. I thought a quick trip to Starbucks for a latte would fill me up a little and give me a little energy boost. Not so much.

I ran into the grocery store for some fresh produce. We were seriously lacking in that department. I picked up my son from school and had a snack: 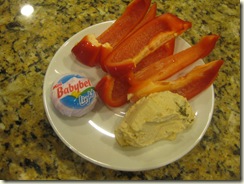 Red bell pepper with hummus and a Babybel cheese. I’m ready for dinner.

What satisfies you when you find yourself really hungry?

What’s the farthest you’ve run on a treadmill? 3 miles. My brain would explode if I had to further.