There was a change of plans last night. I was all ready to make the Great News recipe of the week until the husband came home with food poisoning. Ugh. I think it might have been bad chicken or cheese and both were on the menu for dinner so that obviously got scrapped.

By the time I had gone to the pharmacy to pick up his prescription and to buy copious amounts of Gatorade, it was dark and I wanted dinner. Earlier in the week I had bought a jar of Safeway Select’s Roasted Onion and Garlic pasta sauce. It was a good night for pasta….my go-to dinner. 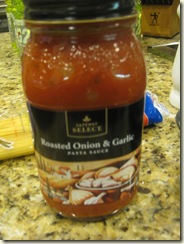 AND I just received this Garlic Gold pack in the mail from Tina’s OpenSky deal: 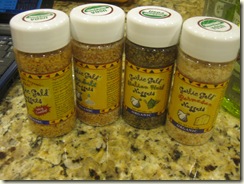 It was a perfect time to try them! I cooked up some linguine, topped it with the sauce and Garlic Gold. I put my plate on the dinner table and both my kids decided they wanted some even though they had already eaten. By the time I finally sat down, I was so ready to eat that I forgot to take a picture. :( I’m sure you can use your imagination.  The sauce was just ok but the Garlic Gold nuggets were good!!

Breakfast this morning was an egg beater burrito on a wheat tortilla with some Mexican style rice and salsa. I had a couple of clementines with it: 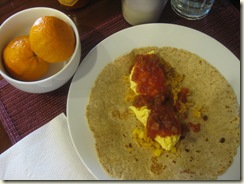 After taking the kids to school, I dropped my car off for a recall repair and came back home to get ready for my friend Lila’s birthday lunch.

Lunch was at Dolce Pane E Vino in Rancho Santa Fe. We sat outside on their patio. It was a little cold but beautiful out nonetheless.

I had a couple of pieces of bread dipped in olive oil and balsamic vinegar: 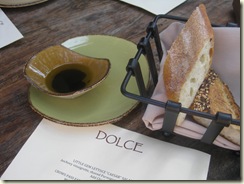 A glass of Chardonnay: 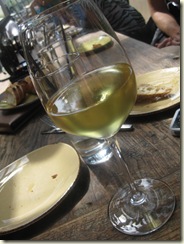 Have you noticed I haven’t had any wine in a few days?? I’m being such a good girl!

We placed our food orders but the waitress wouldn’t let us place our drink orders until the food order was given to the kitchen. Odd. By the time my wine arrived, I was more than excited about it.

I ordered a Caprese salad to start: 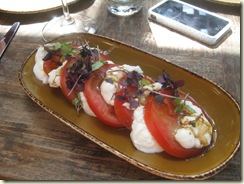 I like mine with a lot of balsamic vinegar so I asked for some extra. My friend Lisa next to me needed some for her beef carpaccio. It took asking about 6 times (once going inside to ask) before it arrived.

When my pizza arrived the balsamic still had not. Hmmm. My pizza was good though! I ordered the Prosciutto & Egg Flatbread with Crushed San Marzano Tomatoes, Wild Arugula and Parmigiano: 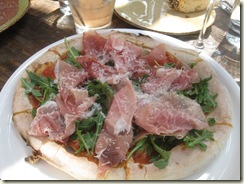 There was actually a sunny side up egg under that prosciutto. It was really good. I actually put some of the fresh mozzarella cheese & tomatoes from my salad on the pizza as well.

Someone ordered dessert for the table: some sort of chocolate soufflé cakes: 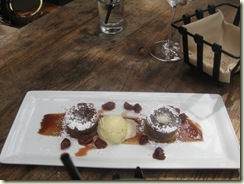 I had a couple of bites. I showed restraint. I also knew that if I ate anymore I wouldn’t feel too hot. Using the brains!

I’ve been to Dolce Pane E Vino before and never had a problem. Usually I’m pretty easy going but I was irritated today at the service. I think they old had one server but the restaurant wasn’t too busy. What bothered me was that she seemed annoyed by anything we asked for. Never was there an apology like “Sorry we are short today” or “I’m the only one here, please bear with me.” Oh well. You can’t win them all!

Ok, I gotta run. I have to pick up my car from the repair place and get to track practice. Ah yes, track. I won’t be eating anything else before track. For the last few weeks, I’ve tried to figure out how much to eat beforehand and when so that I don’t “feel it” while running. We’ll see what happens today. :)

Ever had an egg on your pizza? It was really good!

What do you do when service is bad at a restaurant?