I actually got rather creative with dinner last night. I made some whole wheat penne pasta and added broccoli to the pot for the last few minutes of cooking. After draining the pasta, I stirred in a wedge of Laughing Cow Garlic & Herb cheese, 2 teaspoons of fat free sour cream, sauteed shallot, mushrooms and shrimp. Topped the whole thing off with some Parmesan, black pepper and red pepper flakes: 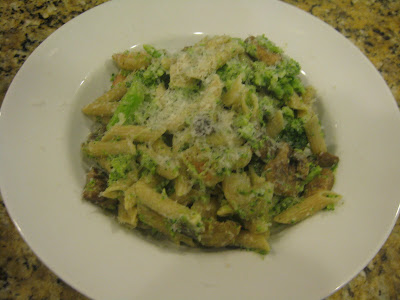 Based upon my sister in law's recommendation, I tried this for dessert: 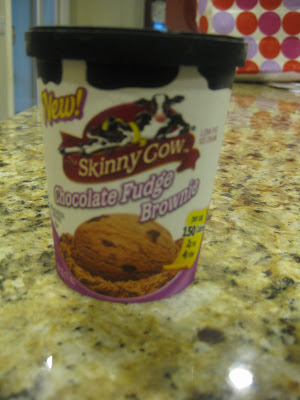 New Skinny Cow ice cream cups. That entire thing is 2 points. It was really good too! Yeah!
This morning I tried something new from Trader Joe's: 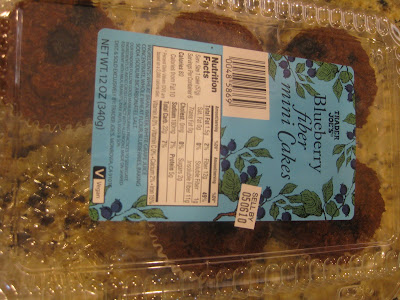 Blueberry Fiber Mini Cakes. I bought them originally for my kids but they didn't like them (big surprise...not) so I decided to try one. I love bran muffins and that's what these taste like. Also on the menu this morning was a slice of light wheat toast topped with an egg white puff with a little light shredded cheddar cheese and some strawberries: 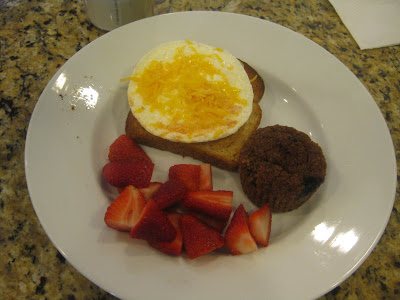 I took the kids to school and spent a ton of time on the phone with Costco repairs regarding my laptop. I turned it on this morning and there were black and white lines running down the screen. Nice. Fortunately, I have an old laptop from my working days. Then my daughter's school called me to have me come get her because she had a fever. Also nice. Somewhere in between all this, I went to spin class. It took about half the class for me to finally get focused. Oh well...at least I went!

I came home and made lunch: a big salad with everything but the kitchen sink in it: mixed greens, cucumber, broccoli, mushrooms, tomatoes, red bell peppers, the rest of the penne from last night, some hummus and balsamic vinegar! 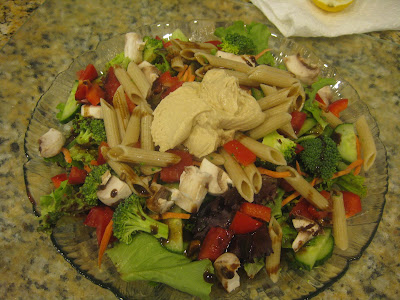 It was freaking amazing.

I took my daughter with me to pick my son up from school and then we headed over to the doctor's office (I already had an appointment for my son's checkup anyway). My daughter is fine...the doctor said she's at the tail end of a virus. Ok....guess I didn't notice the front end?? My son had to get a couple of vaccinations so I had promised him we'd go to Target afterwards to pick out a toy so that's what we did.
I'm so glad that I get to go out to dinner with my sister in law tonight...it's been a heck of day!!
Question of the day: What are your favorite salad toppings? I love cucumber, tomatoes and mushrooms. I used to love to pile hard boiled eggs on my salads but I've since learned the mushrooms deliver the same sort of texture on salads that the eggs did. Nice!