Sorry about the lack of post last night but I got home a little bit late and the hubby was already asleep so I didn't want to be rude and start typing! :)

Let's go back to yesterday....three days in a row at my goal weight. I feel very proud and accomplished. I had an egg beater sandwich on a sandwich thin with a slice of low fat swiss cheese and some strawberries: 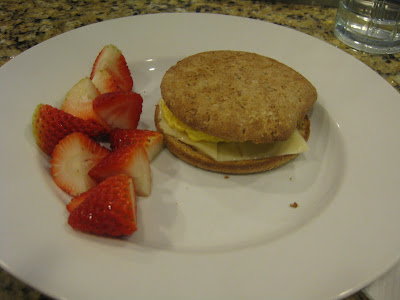 After taking the kids to school, I went to Zumba. Yes it's my day OFF from P90X but I really love Zumba! I burned almost 550 calories and don't feel like I was working out. What could be better than that?

Lunch was the usual turkey sandwich from Subway: 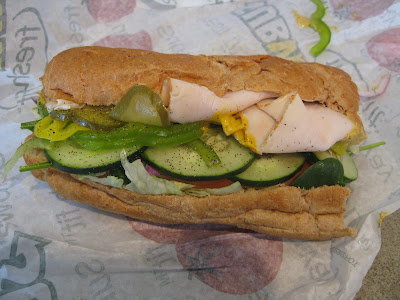 Then I had to run some errands. I felt it was then time for frozen yogurt. But when is it not time? :) 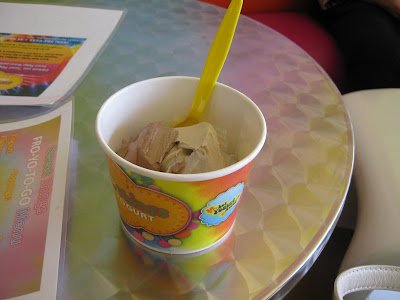 I came home and caught up on some email/blogs. It was then time to get ready to go the sports club meeting. I'm on the sports committee at our club. Then it was off to meet my sister in law (who is in town during the week for work for the next several months!) for dinner at Jake's in Del Mar.

I love this restaurant! It's right on the water and the view is beautiful when it's not dark. :) I started with a piece of warm bread and butter. Ahhh.....there is really nothing better than warm bread and butter. I rarely eat it at restaurants but I LOVE it when I do. :) I had two glasses of Merlot over the wonderful evening. My appetizer was the Ahi Sashimi: 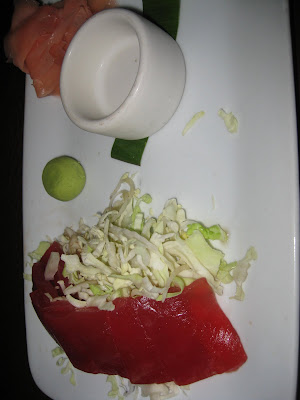 Next up was the Pecan Crusted Sea Bass: 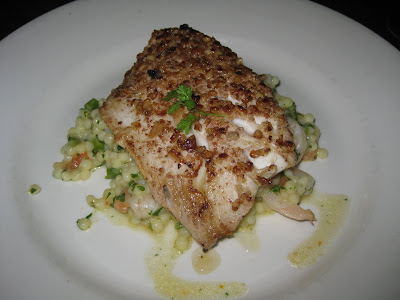 It came with rock shrimp couscous and roasted red pepper butter which I ordered on the side. Good thing....it was a little container of buttery fat. As it was, my meal was a little buttery on it's own. This dish was FABULOUS. I ate every single bite. My sister in law ordered hers with steamed veggies instead of the couscous. I *should* have done that but was glad I didn't. It was the perfect meal. No dessert....we were both trying to be good. :) I dropped her off at her hotel and then realized that I left my phone at the restaurant and had to go back. Argh...I've never done that before. I guess there's a first for everything.

Today's breakfast was a repeat of yesterdays (except for a fruit change) because it was SO good. 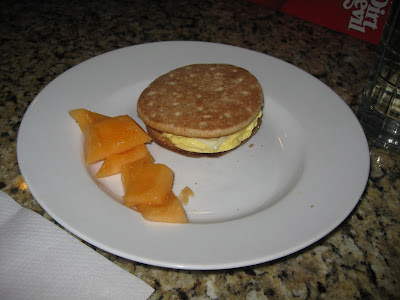 Today my son's class was going on a field trip to Birch Aquarium and I was one of the drivers. When we arrived, the kids had a snack so I decided to eat my Fiber One bar. I didn't take a picture seeing that I was with 14 kids and other moms and thought it may look weird. :) After the field trip, I took the kids back to school and had another snack on the way to Lisa's house: 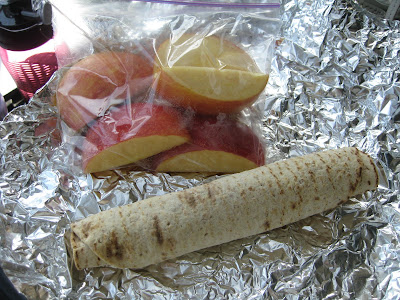 A flat out wrap with better'n peanut butter and an apple. The apple tasted mushy so I didn't eat it. :(
Today's P90x video was a new one. Today is the first day of Week 5. It was a chest/back/triceps video and it was HARD!! We were supposed to do one arm push ups for one of the moves. Yeah right. I did the most half ass one arm push ups on my knees that you've ever seen. At least I tried though! That video was followed up by Ab Ripper which I affectionately call "Ab Crapper."

I came home craving veggies and tuna so that's exactly what I had. I had mixed greens, tomatoes, cucumber, shredded carrots, mushrooms, green onions, bell peppers and I can of tuna that I just added garlic salt and pepper too. I drizzled the whole thing with a little olive oil and a lot of balsamic vinegar. 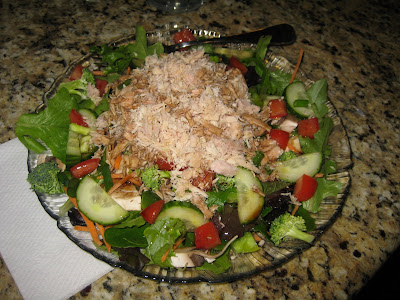