Happy Monday!! I had such a nice time at my parent's house!! So yesterday, I brought my own breakfast. :) Light English muffin with Barney Butter and strawberries. I had some chai tea as well. 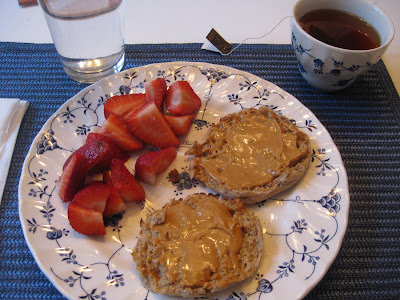 I got ready and drove to Pacific Palisades for my friend's bridal shower. It was at her parent's house and we all had a really great time. When we walked in, there was a delicious champagne cocktail waiting for us: 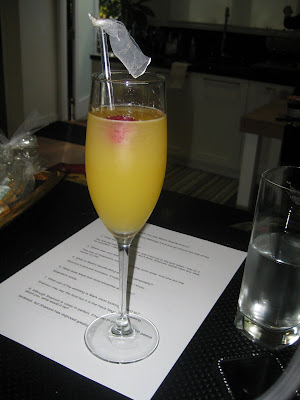 Lunch was a buffet of salads, salmon, fruit, scones and quiche. I went with the chinese chicken salad, mixed greens and some salmon: 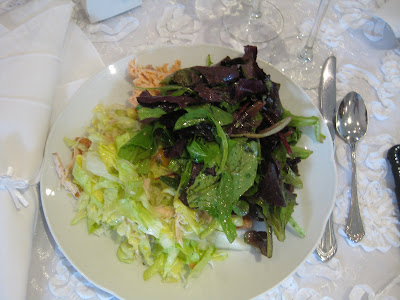 I actually went back and refilled the salad...both salads were delicious! Dessert was either apple pie or lemon meringue. I went with the apple pie and some coffee: 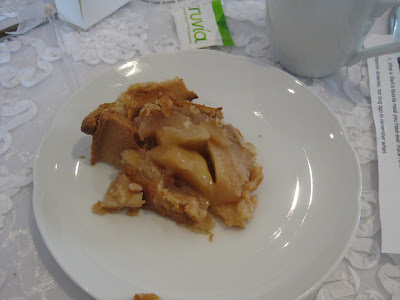 It was warm and so good! Then it was time to say goodbye and hit the road for the two hour drive back home.
Once home, I had about an hour and a half to put laundry away, empty the dishwasher, feed the kids dinner and get ready for the next event: the preschool fundraiser.

Hubby and I drove to downtown San Diego to a place called Vin de Syrah for our preschool's fundraiser. As soon as I arrived a got a glass of syrah and headed straight for the food. :) They had a cheese platter, a lox plate and tons of sushi. I had a whole bunch of sushi..... 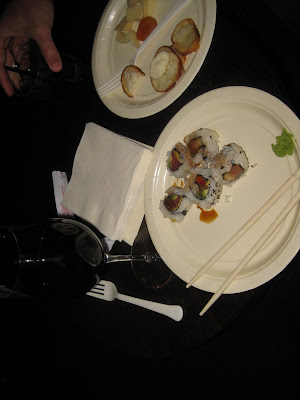 That was the only decent picture. The lighting was strange and I couldn't get my pictures to look right. I had a couple of pieces of cheese and some of the passed appetizers. My favorite was the "tuna tappenade". It was tuna salad and olive tappenade on a little roll.

Dessert were mini cupcakes, mini brownies and mini truffles. I had a bite of each and that was it. Yeah, self restraint! 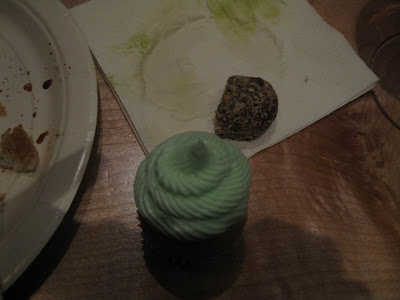 I also had a second glass of syrah and then we called it a night!

Breakfast this morning was an egg beater sandwich on a bagel thin with a Laughing Cow cheese wedge and a side of cantaloupe: 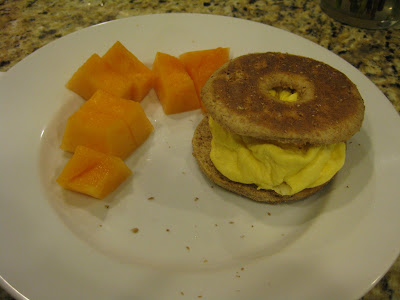 I took the kids to school and then went to Lisa's for P90X fun!! I had much more energy today since I had taken such a nice break! Today's videos were Legs & Back and the Ab "Crapper". I don't mind the Legs/Back video actually. I DID do every single one of the 339 ab moves in the ab video though....the first time I was able to do that! It's only taken like 5 weeks! Ugh!!!

I went with my husband to Subway for lunch: 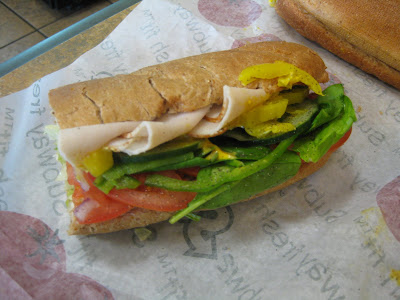 And yogurt for dessert. :) 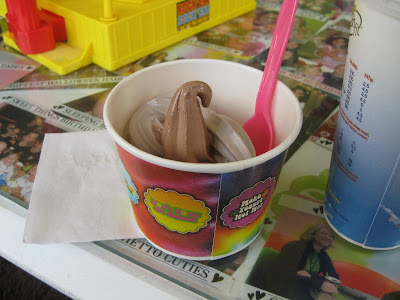 Then we went to Costco. I got a few things that I needed while my husband LOADED up on alcohol for a bachelor party he is going to in Vegas this weekend. It was ridiculous...he had one of those flat things (instead of a regular cart) stacked with beer and vodka and all sorts of other beverage necessities. I guess it will be an interesting weekend.......
And now I have to pay bills and clean up my desk. Fun. Not. See ya later!
Email Post
Labels: Bagel Thins Barney Butter Egg Beaters Laughing Cow P90X Subway