I had to set the alarm this morning for the first time in a few weeks. Ick. Me no like that! But I felt better after getting out of the shower. After getting everyone ready to go to school, I had breakfast: Fage yogurt with 1/2 cup of Fiber One cereal, strawberries and dried cranberries. Especially excellent! 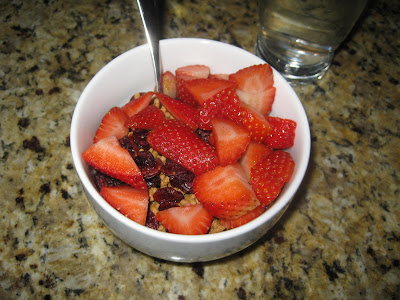 After dropping the kids at school, I went to Step and Sculpt class. I haven't been in awhile so it felt so good! I'm sure I'll be sore tomorrow.
I ran home and changed, went to the grocery store to pick up a few needed items and then came back home and had a quick lunch. I was short on time so I heated up a Smart Ones meal: Tuna Noodle Gratin. It wasn't too bad actually. I paired it with a mixed green salad with tomatoes and some more of the Marzetti Caesar dressing. It's such a good dressing! Glad I discovered it! 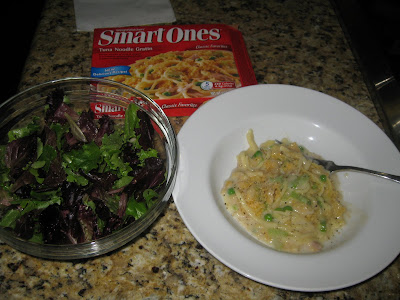 I picked the kids up from school and then came home and caught up on email/blogs, paid bills and had a snack. I heated up a cup of Roasted Red Pepper and Tomato soup and had a slice of wheat toast with a Laughing Cow Garlic cheese wedge: 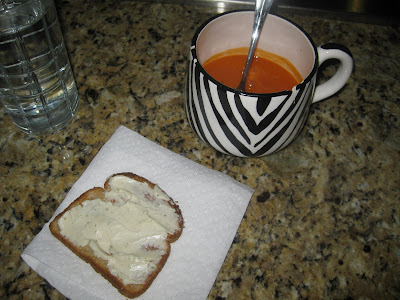 Nothing too noteworthy happened between my snack and dinner. Hubby isn't home for dinner so I decided to try something I've had in the pantry for awhile: Lundberg's Cheddar Broccoli Risotto. 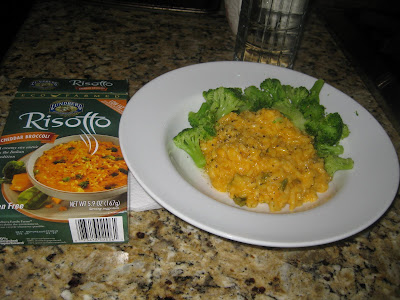 I added some more broccoli to it to punch the veggie power up a little. I thought it was ok...it actually grew on me as I was eating it. I have the other half left so I'll probably eat it for another meal soon. I doubt I'd buy it again soon.....it didn't have any "wow" factor.
I have several points left so I'll probably have something with peanut or almond butter after the kiddos go to sleep. Nite all!
Email Post
Labels: Fage fiber one Laughing Cow