Today was a day filled with delicious food! First up was a standard: Fage yogurt with Fiber One cereal and strawberries. 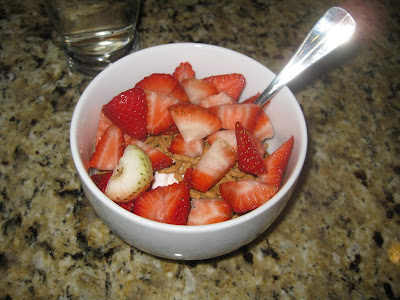 Took the kids to school and made my way over to Great News for cooking class. Today's class was on Savory Winter Stews. It was a perfect cold day for it too!

First recipe up was Brazilian Fish Stew with Coconut Milk, Tomatoes and Peppers: 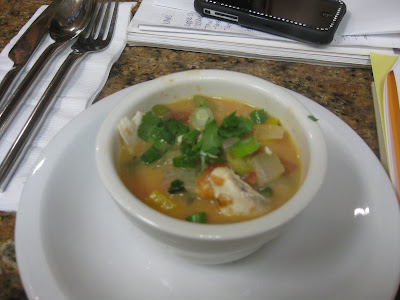 Wow....this was really good!!! I wasn't sure when I first saw the description but this was a definite winner!

Next up was the Beef Stew with Caramelized Onions, Mushrooms and Dried Cherries: 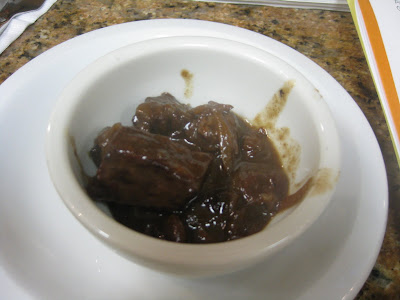 Hmmm......if you read the blog a lot you know that I don't like fruit with "food." Desserts and breakfasts are one thing but not in anything else. So.....I was a huge fan of this. I like the beef and the stew part but I didn't like the bites that had cherries in it.

Next was Sausage, Chicken and Shrimp Stew with Tomatoes and Fresh Herbs: 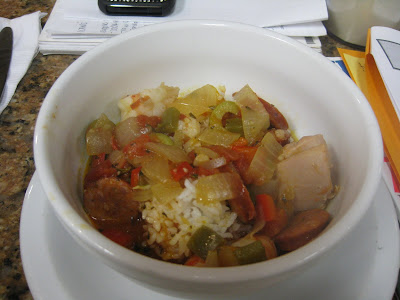 This was really good. The sausage was spicy and I loved the shrimp and all the veggies. They served it with a scoop of rice.

The last stew was Pork and Orange Stew with Shiitake Mushrooms, Baby Carrots and Pearl Onions over Buttery Noodles: 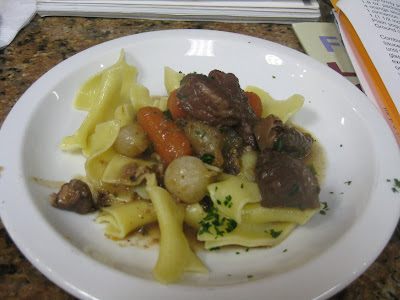 Again....the orange thing didn't do it for me but otherwise I thought this was good. 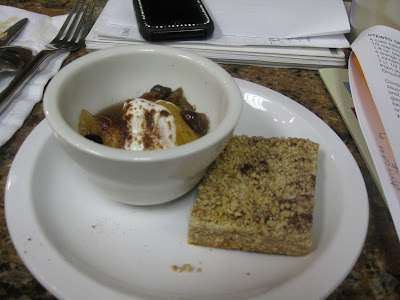 This was a great combo! The shortbread was very cinnamon-y and I like the fruit in this one. :)

I picked up the kids from school, and then went over to Lisa's for P90X. I had to workout alone today because Lisa was working (I know I've mentioned it but she's an amazing photographer!). Today's video was Kenpo which I actually like. Lots of kicks and punches/jabs. It's relatively fun. :)
Afterwards I came home and changed and the hubby decided that we should go out to dinner. We made a New Year's resolution to have a date night once a week and tonight is our only opportunity for the week. I wanted to argue since I already ate so much at class, but I couldn't. How am I to say no to going out to eat? :) We went to a brand new restaurant nearby called Dolce Pane e Vino. It's a small restaurant that specializes in wines and flat bread pizzas. I started off with a basic mixed green salad. My picture didn't turn out but I'm sure you can use your imagination. :)
My entree was their Margherita Pizza. It was a very thin crust pizza and it was pretty tasty! 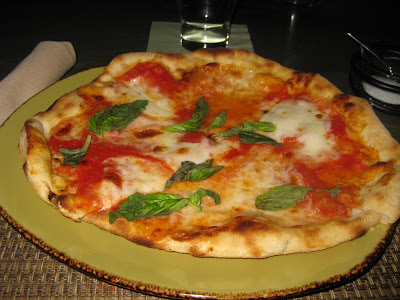 The funny thing is is that I will be eating here again on Thursday for our Ladies Night Out. :) I'm excited to try other things!

As if that weren't enough, we had a sweet tooth and decided to get frozen yogurt afterwards: 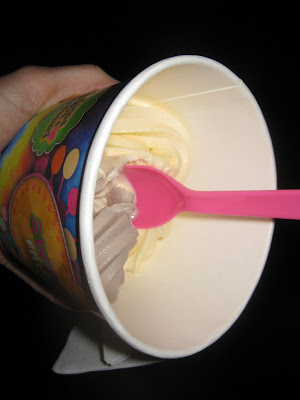