I'm back from Vegas!! Did you miss me???? I can't believe the weight change wasn't that much considering all the damage I did....
Thursday's morning's breakfast was Fage yogurt with some sugar free strawberry jelly mixed in, Fiber One and strawberries. 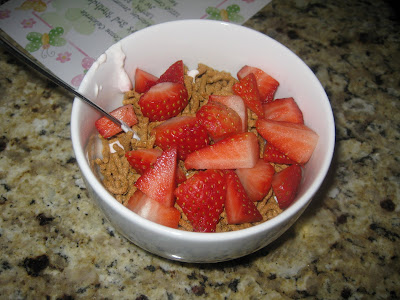 I took the kids to school and then picked up my friend Lisa and the 3 of us (hubby too!) hit the road. When we booked this trip (a birthday present from the hubby), I found out that my friend and her husband were going the same weekend. Yeah!! Her husband had to go up the night before for work, so she joined us on our car ride.
We stopped around Barstow for lunch at Baja Fresh. I had some of hubby's chips and guacamole....they have AWESOME guac there! 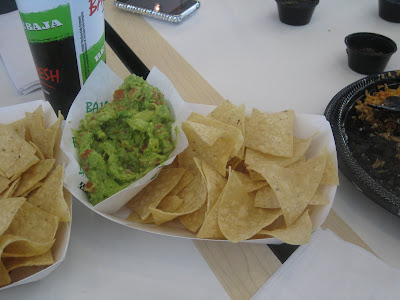 And I ordered a fish burrito "bare bowl" style....without the tortilla and on top of a bed of lettuce. It was really good! 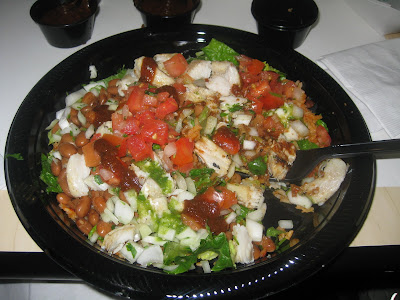 It's fun driving to Vegas with friends.....it took 4 1/2 hours (including our stop) but it felt like a half hour!
We checked into our hotel (Aria - the new hotel at The City Center) and immediately hit the bar. Happy girl with her first drink this year!!! :) 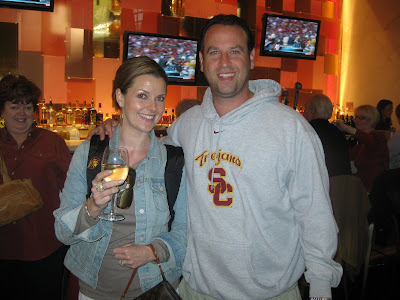 We got settled in our room and did a little shopping! Hubby bought me a fabulous dress and a pair of shoes which were to die for. Afterwards we changed for dinner. Lisa and I went downstairs to the bar while hubby got ready. Another glass of wine of course! 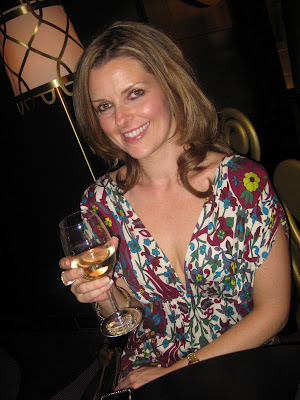 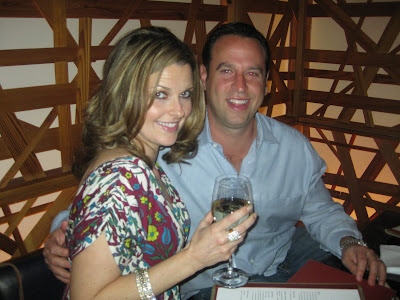 We went to dinner at Shibuya Japanese Restaurant at the MGM. It was a teppanyaki type restaurant. Our meal started with a salad. I didn't eat it because the dressing was way too sweet. It tasted like Kool Aid to me. Ick. 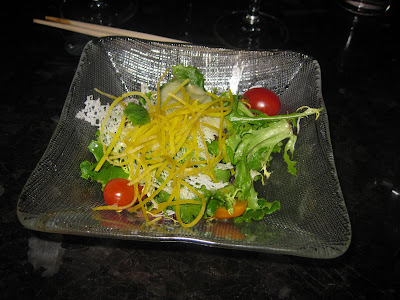 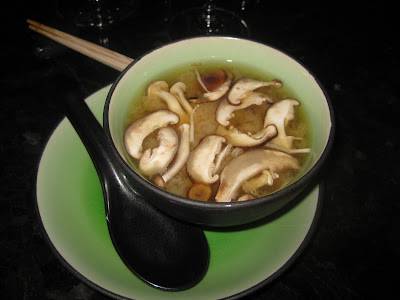 I ordered the Surf and Turf which was lobster, shrimp and steak. It was excellent. I usually order the fried rice but I was trying to be good so I got the steamed rice. Ick and boring. I will go for the fried rice next time but just eat a little of it. 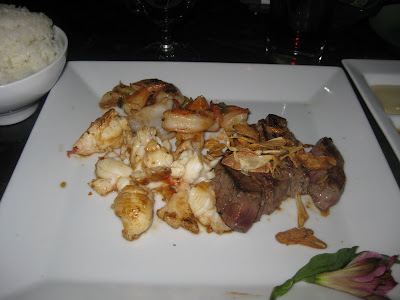 It was a little odd because they served the veggies at the end. I mean, after all of that, who wants to eat veggies now!?!
The dessert was a trio of things that I'm not quite sure what they were. The one on the left was mochi, the one in the middle was chocolately and the one on the end was fruity. 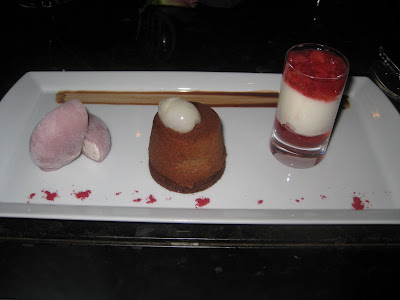 After dinner we went dancing....for hours!!!! More wine and many hours later, we went to bed.

The next day we woke up and hung out in bed for awhile until it was lunch time at the buffet. :) I didn't take any pictures but the buffet was pretty good! Afterwards we stopped by the CES show (Consumer Electronics Show) and then I came back to the hotel for a much needed nap. Much better!!!! I got ready for dinner and we all met at Circo at the Bellagio. I LOVE this restaurant!! 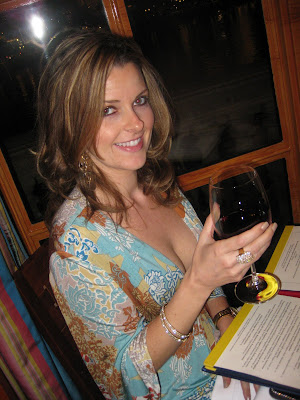 To start I split the Caprese salad with the hubby. I drowned it in balsamic vinegar and used some good, crusty bread to sop it all up. Heaven. 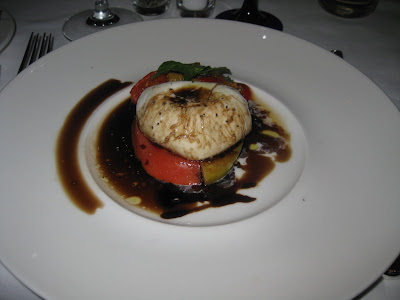 Then I had one of my very favorite meals. I must eat this every time I come to Vegas. They have the world's BEST spaghetti bolognese. The noodles are hand made. 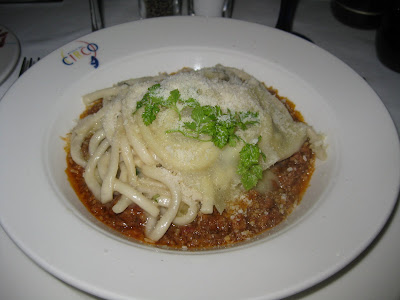 I beg you to try this when you are in Vegas next. You will thank me. 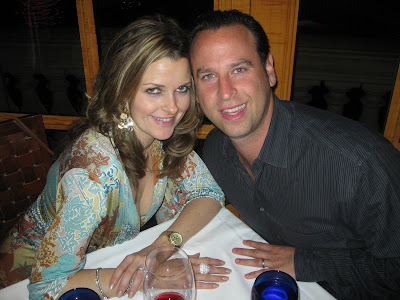 After dinner, we went over to the Mirage to see the Beatles Love show. I'm not a Beatles fan, but this show was great!!!! You can't go wrong with any Circque de Soleil show. Then it was bed time. No wild night Friday night. :)

I slept in Saturday morning and then we headed over to the Venetian's sportsbook to watch the two football games that day. Hubby put some money down on the games so it made it a little more interesting (stressful). For lunch, we picked up food from The Grand Lux cafe. I had the lunch pizza and salad: 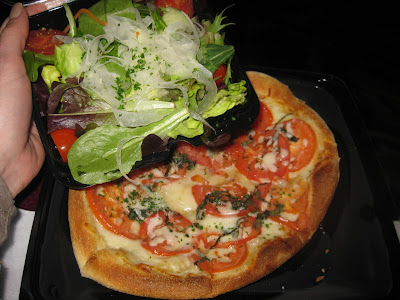 I ate every last wonderful bite. We stayed at the sportsbook for EIGHT hours. I had a few glasses of wine and a mocha while I was there.
After all that, it was time to go back to our hotel and get ready for dinner. We met Lisa and her hubby at Fiamma Italian restaurant at the MGM.
Check me out in my new dress!! 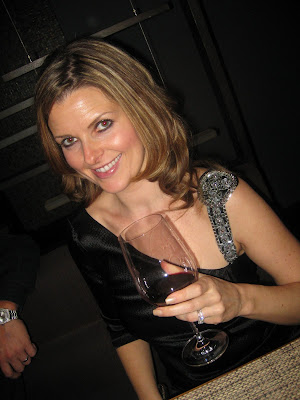 I should have gotten a full length shot but I didn't. :( Next time!
After having a piece of bread, my Caesar salad arrived: 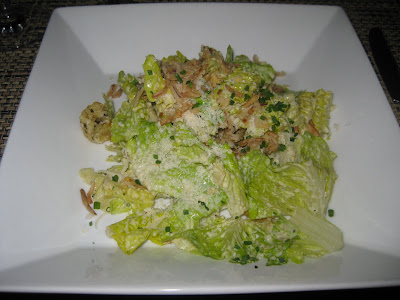 I had the seafood linguine for my entree. It was so good! Nothing beats a good bowl of pasta! 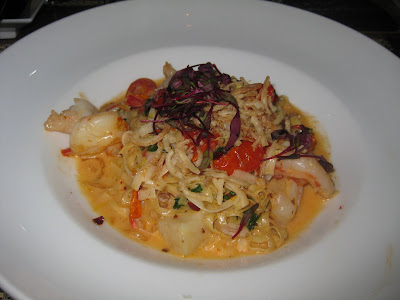 Upon Lisa's husband's recommendation, we ordered the Tartufo for dessert. It's this ice cream bomb concoction that was incredible!! Yes....that's chocolate sauce all over it! 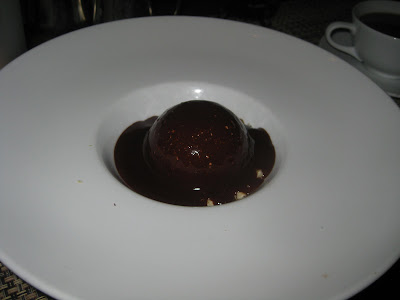 Since we are old and lame, we went back to our rooms afterwards and went to bed. We all had good intentions to go out but the bed sounded so much better!!

The next morning we went down to the Aria's sportsbook and watched one last football game. I had an amazing Bloody Mary while I was there. At halftime we went to have lunch at the sportsbook's restaurant. I ordered a cheeseburger. I LOVE cheeseburgers....I probably eat them only twice a year. I was glad I splurged.....it was worth it! 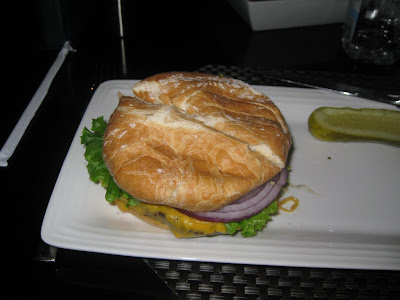 We also split some cheese fries. :) 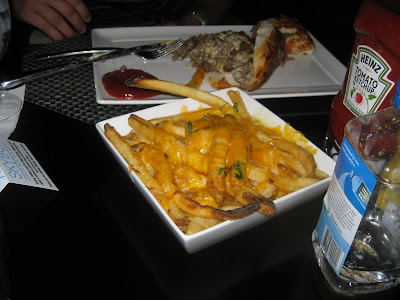 After that, we packed up and headed over to a friend's daughter's bday party. It was strange being at a child's birthday party without our own kids. :) I did have a slice of the amazing cake they had. It rocked my face off!!!
My other friend Dina's husband was in Vegas as well and needed a ride back so we picked him up and began the treck home. Just call us The Vegas Express!!!
We stopped for El Pollo Loco for dinner. I had the classic chicken burrito. I love El Pollo Loco! 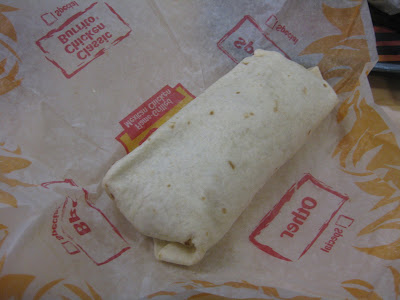 We got home at 9PM and hit the hay!

That brings us to today! If you're still with me.....Congrats!!!!
Breakfast was Ezekiel toast with Barney Butter and an apple: 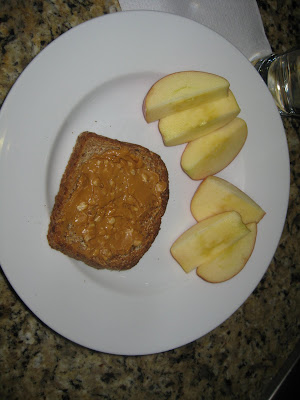 I went to Step and Sculpt class after taking the kids to school. Nice to workout again! I'm sure I'll be sore again!
I ran a couple of errands and came home for a quick lunch: Smart One's Lasagna Bolognese and a salad with light dressing: 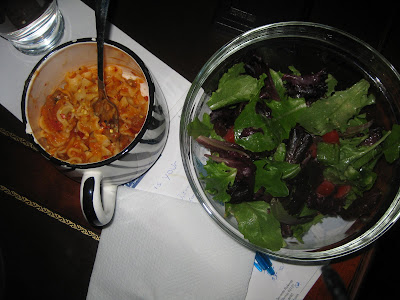 I picked my son up from school and took him to McDonalds for a cone before having to pick up my daughter. I did steal a few licks of his cone but that was it. I'm back on the healthy plan again.....that is until tomorrow night's Bunco. :) The madness never ends does it?
Email Post
Labels: Baja Fresh Barney Butter El Pollo Loco Ezekiel Fage fiber one Las Vegas