What a nice surprise this morning when I stepped on the scale!

Breakfast was Honey Nut Cheerios and strawberries in almond milk. I had a serious craving for it this morning! Don't understand why the picture is sideways though! 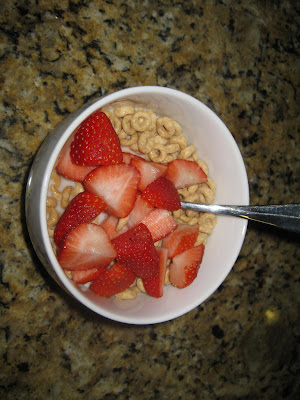 I went over to Lisa's for some more P90X action. Today's video was Legs/Back and Abs. The leg video was challenging but it wasn't as hard as I thought it was going to be so that was nice! I came home and changed and then I had Lisa come with me to Home Depot to pick out some new light bulbs for my kitchen. Mine were too bright and white so she picked out a softer white for me. I stink at this sort of stuff. Now my kitchen looks and feels much warmer. We went to Starbucks afterwards. I tried a new drink: skinny cinnamon dolce latte. I usually get the vanilla version but thought I'd give this one a try. At first I didn't like it....I thought it had too much cinnamon flavor but then it began to grow on me and I ended up liking it. I still like the vanilla better but it's a nice change of pace.

After running a couple more errands, lunch was at Subway. Behold the usual turkey on wheat: 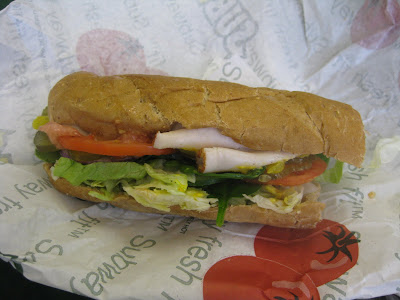 I then went to Trader Joe's and Ralph's to load up on the week's groceries....in the pouring rain. Ugh.....I was soaked when I got home so I changed my clothes and got down to work paying bills, checking email, etc.

Soup sounded really good for dinner so that's what I had. Tomato/Roasted Red Pepper soup and a grilled cheese sandwich made with light wheat bread and light cheese. I lost one half of the sandwich to my son so I only ate one half and half of the soup. I got full very fast.....strange. 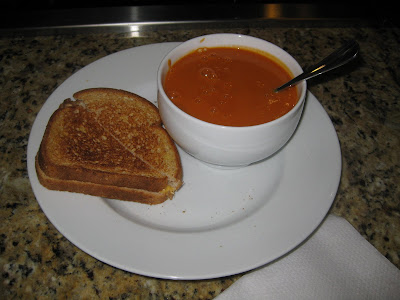 With some points left, I'm not sure what I'll have but it may involve the new Special K granola I bought today! :)