So I discovered something this morning. Eggs and Laughing Cow cheese=deliciousness!!!!!! Behold my light wheat toast with egg beaters and the aforementioned cheese. Why haven't I tried this before?????? 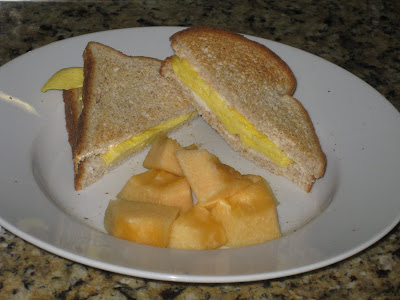 After taking the kids to school, I had to go to a room mom meeting at the school. Then it was off to spin class. I read in one of my magazines that caffeine may help with exercise by giving you an energy boost. So I made some coffee this morning and took it to my meeting. I DID have more energy in spin class and felt like I pushed myself harder than usual. I don't know if it was a coincidence or not but I'll have to try it again and see how it goes. Back to spin....we did 30 minutes of spin and 30 minutes of weights. It was glorious as usual!


I met up with a friend for lunch: SUSHI!! I haven't had sushi since Chicago and I was dying for it. We went to Sushiya in Del Mar. I attacked the sushi when it arrived but did finally managed to snap some pics. 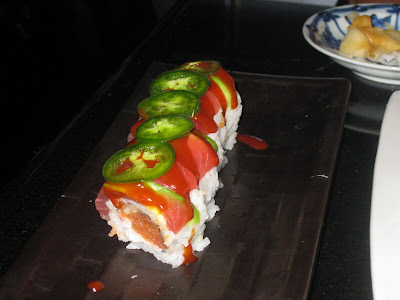 We split an El Fuego roll (above) which had spicy tuna and crab inside and tuna, jalapeno, avo and fire sauce outside. 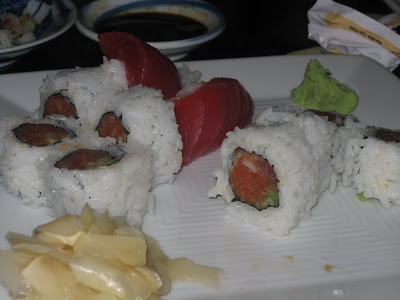 We did some shopping afterwards...it was nice to catch up!

Came home and started to get the kids packed for their trip tomorrow...hubby is taking them up north to see a friend for the weekend and I get to stay home! Yeehaw! I don't think I've been alone in my house for more than a few hours since the kids were born. I won't even know what to do with myself for three whole days!!!!

For dinner I was feeling old school: tuna casserole. I called these types of meals "ghetto fabulous" eats. So I consulted some of my Weight Watcher recipes and came across this one. I had all the ingredients on hand so I went for it. 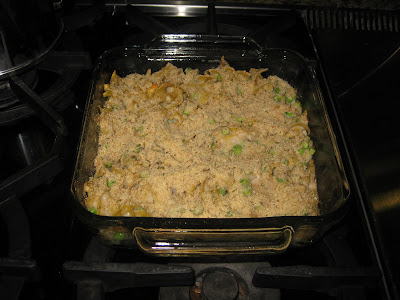 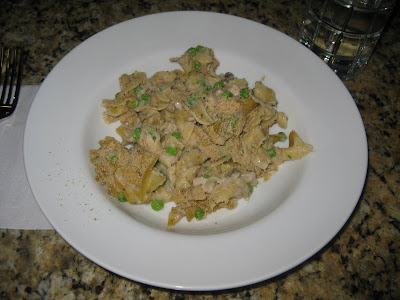 Verdict: So-So. I guess for 5 points it wasn't too bad but I did end up putting Cholula all over it (fixes most problems). I had three servings left so you'll be seeing it again.
That's about it folks. Well....not really....I ate dinner awhile ago and now I'm hungry again. So it's the big decision....to snack or not to snack?
What do you do when the snackies hit before bed? Fight through it or give in?
(Yes, I've already brushed my teeth - still want to eat).
Email Post
Labels: Cholula