Breakfast was a slice of Ezekiel bread with egg beaters and a Laughing Cow cheese. On the side was part of an apple and some orange. I forgot how yummy oranges were! 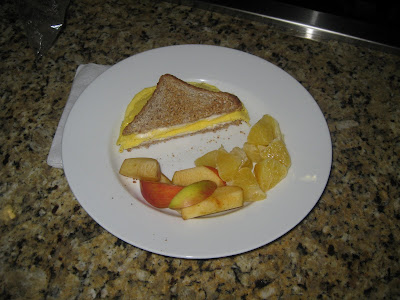 I dropped the kids off at school and then went to Step and Sculpt class. We had a substitute teacher today and boy....did she kick some serious booty!! Holy crap!! At one point we were doing these squats around the step and my legs were so tired it just looked like I was limping around it.

I had a nail appointment right after my class so I just ate my lunch in the car. This is my regular on the go lunch: Flat Out wrap with Better n Peanut Butter and an apple. 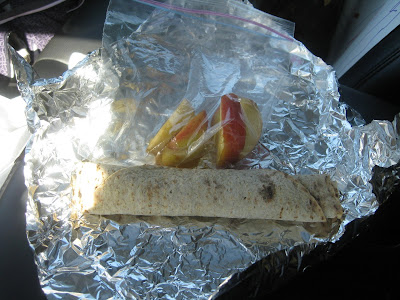 I went to pick up the kids at school and when I got home I was starving. I didn't know what I was hungry for but then I saw this in the pantry: 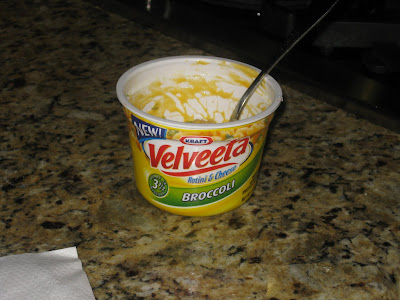 I had received this for free at some point so I decided to try it. Not the healthiest option by far....220 calories for basically nothing. I have to say....all five bites were tasty!!! :) Surprisingly, I was still hungry. I had some unpictured crackers while doing the laundry.

Dinner was whole wheat spaghetti with marinara and an assortment of veggies: onions, mushrooms, zucchini and red bell pepper. 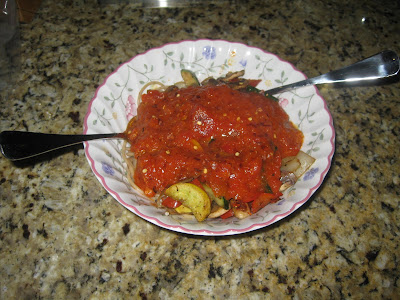 I'm going to put the kids to bed soon and then I need to pack for LA. We are leaving tomorrow afternoon. Crazy Friday night huh? :)