Sodium overload. I will blame it on that.

Breakfast was Trader Joe's Strawberry Yogurt O's with almond milk, strawberries and raspberries. I really like this cereal! I wish there were more of those yogurt clusters though...I seem to only get one per bowl. Does this mean that when I get to the bottom of the box I will get a whole bowl full? One can only wish. 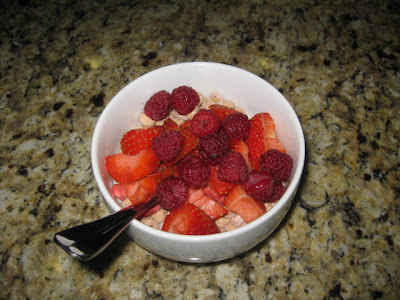 I took the kids to school and went to my regular Monday morning Step and Sculpt class. I felt very tired afterwards but in a good way!!! After putting away laundry and organizing bills, I made lunch. There was one slice of veggie pizza left. It had my name on it. Check out all the red pepper flakes! Love me some spicy food! Then I made a HUGE salad (mixed greens, spinach, tomatoes, mushrooms, red onion, shredded carrots, cucumber and balsamic vinegar) and put it on top. You wouldn't even know there was pizza under there! It was SO GOOD!!! I like it when the salad greens get a little warm from the pizza. 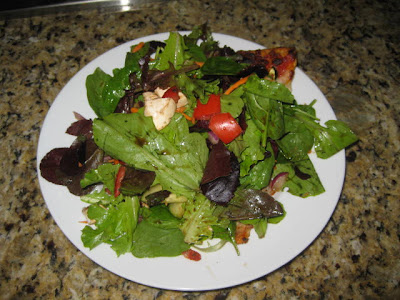 I picked up my son and we went to McDonalds. He got a chocolate milkshake. I got an iced tea. 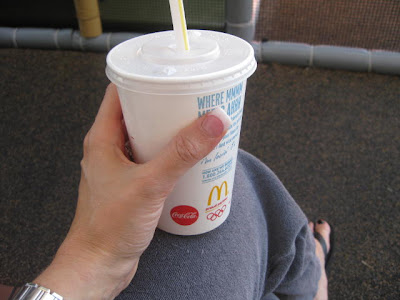 I had to resist to take a sip of the milkshake. You see, for me....it's all or nothing. I CANNOT try even one bite of something that I know I like. It will lead to MANY more bites. It's best I do not go there at all.

So, I watched him play and then we went to pick up my daughter. I was snacky when we got home so I had light wheat toast with a Laughing Cow cheese and a Honeycrisp apple. I'm really liking those apples! 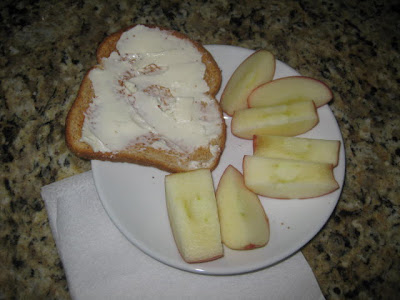 We took the kids to a pumpkin patch for awhile and came home and carved our pumpkins. I really don't like that job. I think the inside of pumpkins stink horribly. But I love foods with pumpkin in it. Anyhoo....it's done and I'm glad for that.

Hubby and I decided that we had too many leftover in the fridge so we declared it a "leftovers night." I decided to have some more of the chili that I made yesterday. 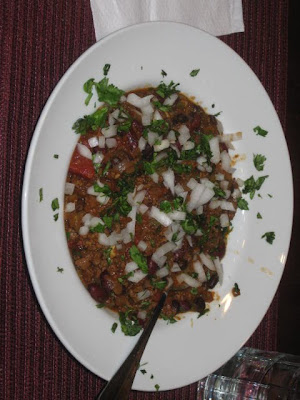 Sorry for the sideways pic....why does it do that? I put cilantro and chopped white onions on top. Verdict? It's still average....not bad but not the best either. I did put a lot of Cholula on top. That almost always makes everything taste better.

After I make a new recipe, I make notes on it if I liked it or not, what changes I made and if the hubby liked it. While trying to decide what to do with the chili recipe, hubby told me I should throw it away. He thought there wasn't a reason to keep a recipe that I wasn't excited about. He's right......I have BINDERS full of recipes.....why keep average ones? So that was that.....in the trash it went and I froze the rest of it for another "I don't know what to make" night.