That being said, let's recap the weekend shall we? We left off right before I left for LA. I did, in fact, eat an almond butter sandwich in the car. (No picture as I was the driver). I drove to my brother in law's house and met the hubby there and left the kids with him and went to my brother's house to get ready for his birthday dinner. We stared off with this old friend: 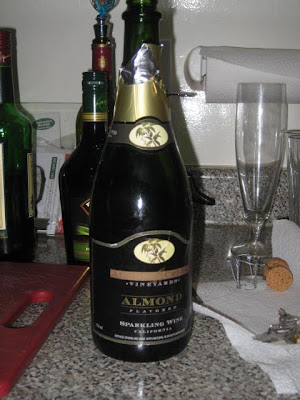 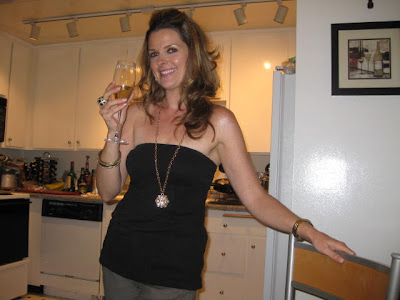 A happy girl.
Dinner was at Boa Restaurant in Santa Monica. We sat outside under heat lamps (it's finally getting colder!). The restaurant was very upscale and moder and the food was DELICIOUS! 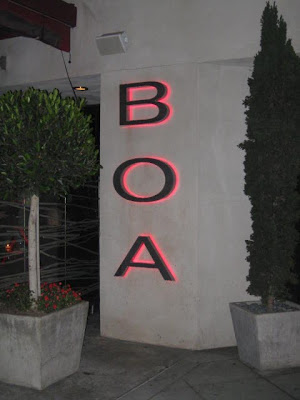 I started off with this lovely glass of chardonnay: 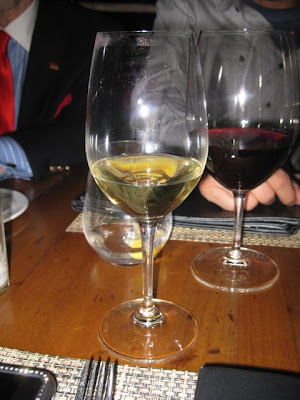 I started with the Goat Cheese Baklava....it had pistachios, black truffles & frisee. It was heaven. Everyone shared their appetizers so the plates got demolished before I was able to snap some pics. But at least you get to see the frisee: 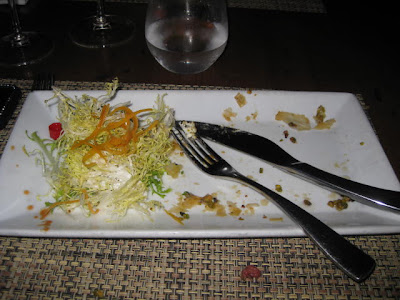 I got to try their Caesar salad (best one of my life!) and the steak tartare (also drool-worthy). My entree was the blackened ahi. Perfectly prepared the way I like it. It was served with a half of a roasted garlic. We ordered a bunch of sides to share: asparagus, broccolini, mac and cheese and creamed spinach. 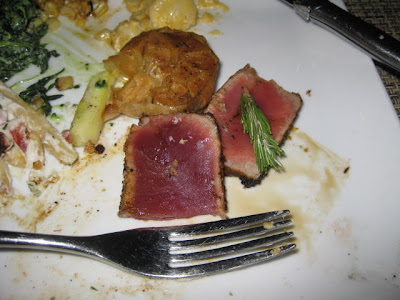 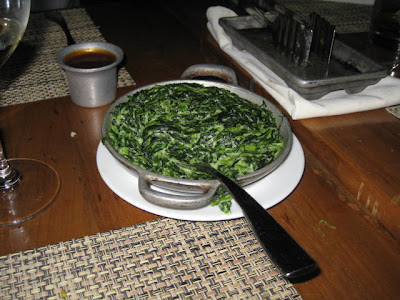 Then it was time for dessert. The birthday boy ordered the chocolate chip cookies with ice cream. They came bearing fire: 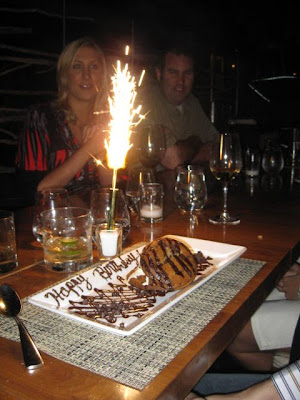 Here it is sans fire: The cookies were soft, warm and sooo chocolately good!! 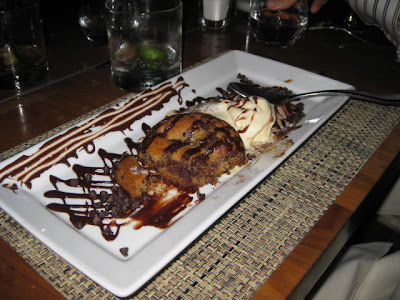 My mom ordered the cotton candy. It was served gigantic style with a candle in the middle giving it a "hot, liquid magma" appearance (Thank you Austin Powers). I don't like cotton candy (please don't throw things) but everyone else said it was delicious. 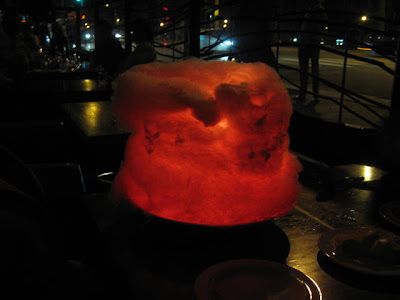 My dessert was the "smores". Chocolate cake with vanilla ice cream on top, a graham cracker type thing and the white stuff in the corner......Marshmallows!!!! I don't know what they did to the marshmallows but OMG.......rich, decadent glob of tasty goo. mmmmmmm 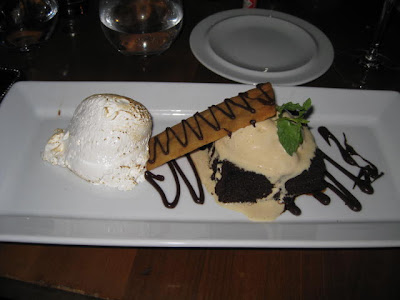 Then it was off to The Wilshire for drinks. I had another glass of chardonnay. Towards the end of the night, I thought it would be a good idea to have one of these: 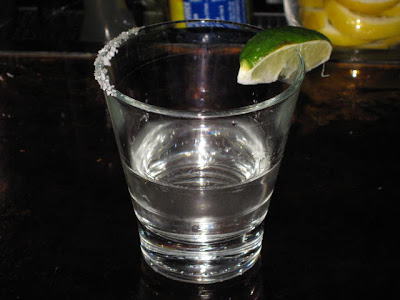 Tequila shot.
Was it a good idea you ask? Probably not....but I do love them Tequila shots. :)
Sunday was two different little kid's birthday parties. There were bagels, pizza and cake at the first one. No picture - too busy feeding the kids but I had coffee (really necessary), a bagel with cream cheese, some fruit and a tiny slice of pizza. I had two bites of my daughter's slice of cake and it was really good. :)
At the next birthday party I had some chicken, tri-tip and salad. I didn't eat any cake at this one. Then it was off to my parent's house for our family birthday dinner for my brother. At this point, I was starting to fade quickly. I needed something greasy ASAP. So we had Mexican for dinner and I had a carne asada burrito. It hit the spot. Also I had some of my brother's ice cream birthday cake. No pictures.....too tired to even know what day it was, let along remember to take pictures of my food. Then we drove home. Zzzzzzzzzzzzzzzzzzzzzzzzzzz
After a good night's sleep (but not enough) I needed a quick breakfast before running out the door. Today's choice was Special K Cinnamon Pecan with unsweetened vanilla almond milk with some strawberries on the side. Several cups of coffee sealed the deal. 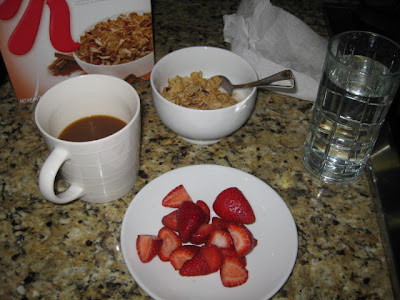 Dropped the kids off at school and had a much needed hair cut and color. Ahhhhh....feel like myself again! I forgot my camera but lunch was a tuna sandwich on squaw bread (my favorite-why is it so hard to find?) and fruit.
Now I'm catching up on blogs, checking my email and getting ready for my trip to Hawaii tomorrow. Yes, another trip. My life is nuts lately. But I cannot complain...I am going to Hawaii. :) We are attending a friend's wedding there. We'll be there for a week.
Tonight we are taking family pictures for our holiday cards. Can you believe it's that time of year again????
Peace out.