Oh my….it has been quite the whirlwind since I posted last!! Going to see the American Idol taping was beyond fun! I’m lucky to have experienced such a unique opportunity!

Wednesday night was track practice. Before I left I had some toast with peanut butter. 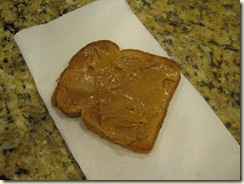 I was pretty hungry when I got back so I made a turkey and provolone cheese sandwich: 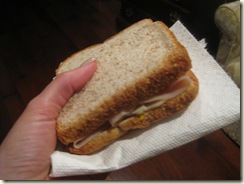 Yesterday morning’s breakfast was Honey Nut Cheerios with almond milk and a side of strawberries: 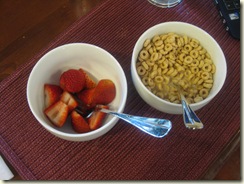 I got the kids off to school  and came home to get dressed for the American Idol taping in Los Angeles. My friend Lisa picked me and a couple friends up and we hit the road.

We decided to have lunch at The Grove shopping mall in Los Angeles since it was near the CBS lot where Idol is taped.

Of course there was wine: 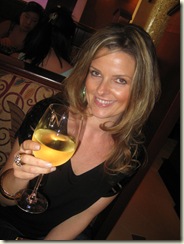 My friend Dina and I: 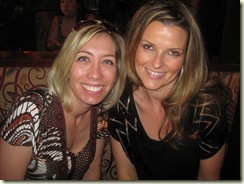 We had a few great appetizers….Crab and Artichoke Dip: 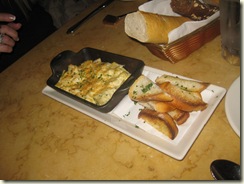 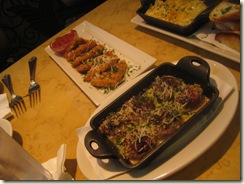 For lunch I ordered the Lunch Pizza and Salad: 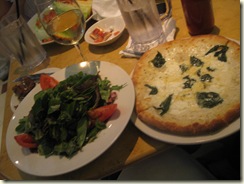 Yes, that’s the lunch portion. :) The pizza I chose was the White Pizza and it rocked my face off.

My friend Dina ordered the Kahlua cheesecake and offered to share: 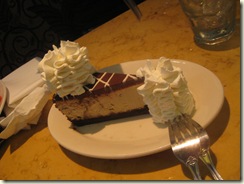 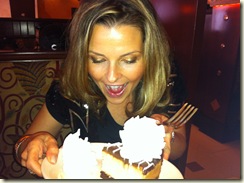 That thing was ridiculously good.

After lunch we walked over to the CBS lot for the taping. We could not bring in any phones or camera so I don’t have pictures to share. The set/stage was SO much smaller than it looks. I was shocked. Jennifer Lopez looked just as amazing as I thought she would. :)

Our seats were in the first tier up in the front row so we had a great view of everything. Dina’s husband actually found us on TV and took pictures of it. What a guy! We are in the bottom right corner (I’m in the middle in black):

My friend  Lisa actually worked for American Idol as their photographer a few years back so we were able to get her friend, the current photographer, to take a picture of us in  front of the judges’ chairs. Hopefully I’ll get a copy so I can share it with you!

During the commercials, tons of hair and makeup people would swarm in on Randy, Jennifer and Steven. It was kind of humorous actually. They also gave out a bunch of free stuff (t-shirts, cups,  bags) to people in the audience during the breaks.

After the show, we were in for another treat! There was  a surprise private taping for Bruno Mars new song, The Lazy Song,  that will be used for a future taping! Wow! What a day!

After the taping was over, we decided to do a little shopping to wait out the traffic. On our way home we stopped at In N Out for dinner. 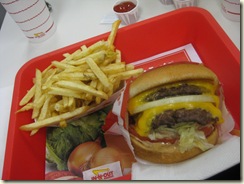 My favorite burger of all time.

We hit the road again and drove for a bit until one of my friend’s suggested we go to Krispy Kreme to pick up some doughnuts. When I had announced that I had never been inside an actual Krispy Kreme nor had I eaten a hot, fresh doughnut from the establishment, there was shock and dismay. It was as if I had announced that I had never tried an apple before.

There was a consensus that I must go inside and understand what the hype was all about. When we arrived, the notorious “Hot Doughnuts Now” sign was ON and lit up for the whole world to see! 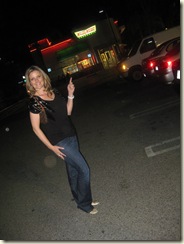 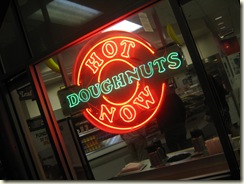 What did I think? 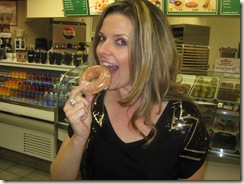 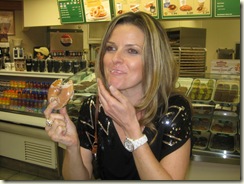 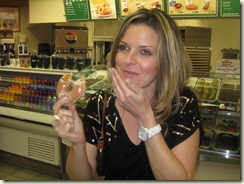 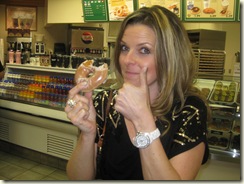 We arrived home finally sometime after midnight.  My house was more quiet that usual. Another exciting thing about my week of craziness is that my husband took the kiddos to Atlanta to visit his brother. Daddy bonding time. Mommy alone time. Everyone is happy!

They all left yesterday afternoon to stay with their grandma in Orange County because their flight left out of Los Angeles this morning. So this morning I was able to sleep in! Wahoo!

Just because I’m “on vacation” doesn’t mean I can neglect my half marathon training right? So, I rolled out of bed and hit the street for a 4 mile run (in the blazing heat!):

I was a sweaty mess when  I got back. The shower would have to wait…I was starving! 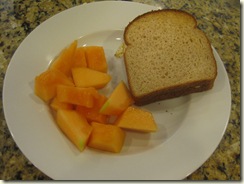 Egg sandwich on whole wheat bread with a side of cantaloupe.

After my shower, I went to my wax appointment. The last and final Hurrah! of my crazy week is that I will be going with a whole bunch of my friends to Newport Beach tomorrow for one night. I’m hoping the weather will  stay nice so we can lay by the pool!

Tomorrow is a “belated birthday party” for me. My friends and I have started a tradition where we go away for a night or two for each other’s birthdays. My birthday is in December and it’s too crazy then to plan anything so when my husband suggested the trip to Atlanta with the kids, I thought it would be the perfect weekend to celebrate my birthday party!

After my appointment, I went over to the mall to run some errands. I stopped in California Pizza Kitchen for lunch. I ordered my favorite salad: The Original Chopped with a glass of Chardonnay: 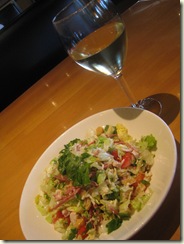 Whew! What a long post! Thanks to those of you  who are still reading! Hopefully I’ll get a chance to blog tomorrow from the hotel. Have a great weekend!!

Who are you hoping wins American Idol?

Do you have any birthday traditions with your friends/family?