We went to Mille Fleurs restaurant in Rancho Santa Fe. They offer modern French cuisine and the restaurant itself is really charming!

I started with the first of two glasses of Chardonnay: 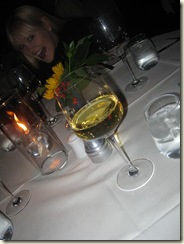 One of my friends couldn’t decide on what soup to order as an appetizer so they brought her both to try. Lobster bisque and a creamed mushroom soup….both were good but the mushroom soup was the best! 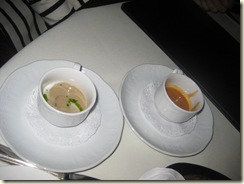 We all were presented with a complimentary blue cheese soufflé from the chef: 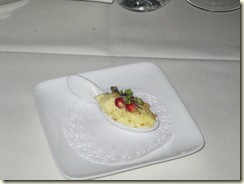 It was topped with pomegranate seeds and was pretty tasty!

Everyone ordered the mushroom soup except for me. For my appetizer, I had my eye on the Mahi Mahi Tartare: 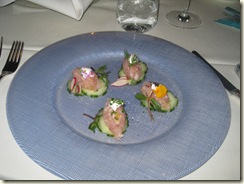 It was served with these little toasts on the side. It was so fresh!

For our entrees, we all got the same thing: Weiner Schnitzel of Veal: 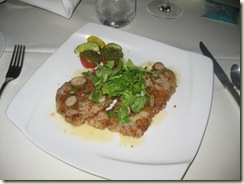 A few of my friends had had it before and highly recommended it. It came with an arugula salad, caper berries and a lemon butter. I’m so glad I ordered it…..it melted in your mouth.

We all splurged and ordered dessert. I’m usually a chocolate girl all the way but the chocolate option didn’t appeal to me so I went with the Apple-Rain Strudel: 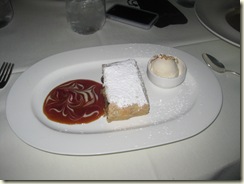 It was accompanied by cinnamon, almonds, caramel sauce and vanilla ice cream. It was ok….I probably wouldn’t order it again.

I really had a great time! As soon as I got home, I went to bed!

Breakfast this morning was a light wheat English muffin with Barney Butter and a side of under-ripe cantaloupe: 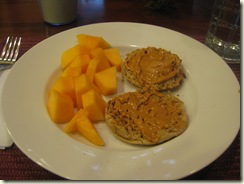 I took the kids to school, then went to Zumba. Came home to change and do some random stuff around the house and then went to run some errands. I stopped at Subway for lunch: 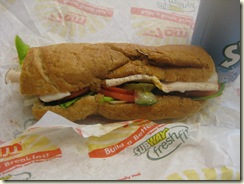 Then made a quick trip to Costco. I grabbed something for dinner that I’m excited about. :)

I picked up the kids and now we are chilling at home. I don’t plan to do much tonight except for some laundry.

What are some of your favorite Costco items?