After my fitness meeting last night, I pulled out some of my never-ending leftovers of Elie Krieger’s Four Cheese Mac & Cheese out of the freezer. I think there’s four more servings of it in the freezer. Good thing I like it! 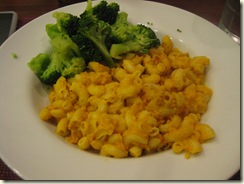 With some steamed broccoli, it was a delicious and filling meal! But there’s always room for dessert right? 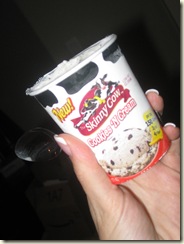 These Skinny Cow ice cream cups are so good!

For breakfast I mixed some canned pumpkin leftover from the Pumpkin Oatmeal cookies I made on Sunday with some Fage yogurt, Fiber One cereal and some raspberries: 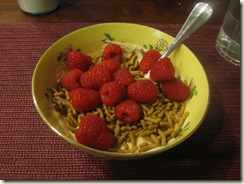 I took the kids to school and then stopped by Starbucks for some green tea. Then it was time for cooking class at Great News. Today’s class was “Harvest Soups and Breads.”

First up was White Bean Soup with Sausage, Tomatoes and Kale with Zucchini, Olive and Sun-Dried Tomato Flatbread: 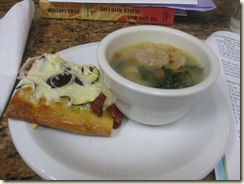 The soup was delicious and hearty but the winner was the flatbread. So Amazing! I would love to serve these as appetizers at a party or just eat for dinner!

The next recipe was Creamy Chicken and Mushroom Soup with Sourdough Panini with Smoked Gouda, Ham, Fontina and Tomato: 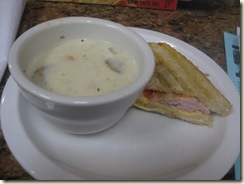 Another winner! The soup was decadent and comforting and the Panini was basically cheesy ham goodness inside buttery toasty bread. How could that be bad!?!

Last up was the one I thought I’d like the least but ended up being my favorite: Southwestern Butternut Squash Chipotle-Spiced Soup with Baked Chicken Quesadilla Wedges with Cilantro Pesto and Three Cheeses: 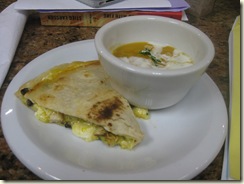 The soup rocked my face off. I LOVED it….a little sweet because of the squash and a little smoky/spicy because of the chipotle chilies. The soup was drizzled with a little Creme Fraiche and sprinkled with cilantro. It screamed fall with every bite. Now I wonder if the hubby would eat this? He would definitely eat the quesadilla…..it had so many wonderful flavors….loved it!

Next it was off to get gas, go to the post office (why is there always 20 people in line and only one person working behind the desk?) and then pick up my daughter from school. I had an hour to kill before picking up my son so I took her to McDonald’s for snack and to play. She had a yogurt parfait and told me to take all the fruit out because it “makes her sick.” Nice.

We picked up my son and I came home to go for a 3.1 mile run. I hadn’t run that far in awhile and it felt really good!! Now it’s time to get dinner ready folks! Good night!

Random Question: When I see people running, they fall into two groups for me. One group are runners who look like they are gliding along, without a care in the world, making it look so easy to run. The second group look like they are struggling and that their legs are made of lead. I was wondering today while I was running, which group I’d fall in if I saw myself running. I hope it’s the “gliding group” but I’m not sure.

What “group” do you think you fall into?