OUCH!
I deserved that.
Before I give you a recap of the weekend (more celebrity pics!), let's review today shall we?
Breakfast......was different!!!!! My brother (who admitted to being an occasional reader of my blog) told me my repetitive breakfasts were boring. So, let's spice things up shall we? Looks like my free sample of Kashi's Honey Sunshine cereal came at the perfect time! I poured a half cup of unsweetened vanilla almond milk over it and had a bowl of strawberries and a cup of coffee (I really needed it!!). 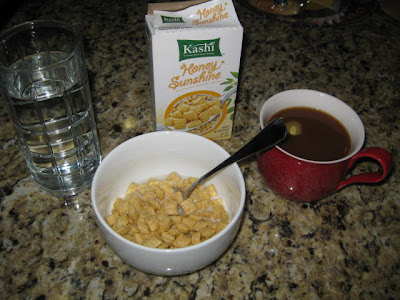 The cereal was pretty good....reminded me of Captain Crunch but healthier tasting. :) I was surprised to see so much fiber in the cereal! Kids don't have school today so I had a leisurely time getting dressed this morning. I went to Step and Sculpt class and our instructor really kicked it into high gear today which was awesome!! Hopefully I'll be sore tomorrow....I really like being sore!!!
After class I went to get gas and grocery shop for the week. I came home and made a chicken salad wrap. In the chicken salad was: canned chicken, a plum tomato, celery, bell pepper, pickles, red onions, shredded carrots, 1 tablespoon of light mayo, a couple of squirts of Dijonaisse, garlic salt and paprika. I put it in a La Tortilla high fiber whole wheat tortilla with some spinach and attempted to roll it up....it was a fight but I won. I had a half an apple with it. YUM. 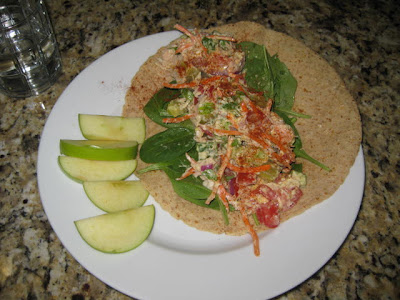 Since I've been traveling and busy lately, things are starting to pile up all around the house....no me gusta!!! So I spent a few hours cleaning and organizing. It feels so great to get everything put away. After all that hard work, I was hungry. I didn't get any nut butter this morning so snack time was perfect for it. Behold a peanut butter sandwich on whole wheat and some more apple. So satisfying!!! Ok, onto the weekend. Saturday after spin class, I showered and got dressed and all packed for LA. We all loaded in the car and started the two hour drive. We didn't have time to stop for lunch so it was fast food while driving (not my favorite combinations). Del Taco was the unanimous choice (almost unanimous) choice. I had a spicy jack quesadilla and a veggie burrito. I did enjoy it, I won't lie. We dropped the kids off at my sister in law's and got dressed for the night. We headed over to Staples Center for the Klitschko fight. We went to a pre-party and I had a couple of glasses of chardonnay and some snacks. The food was just ok....I had some shrimp cocktail, salad and prime rib. I tried some of their mini desserts: brownie, lemon bar and a couple of unknowns. :) Look who I got a picture with (two weekends in a row): 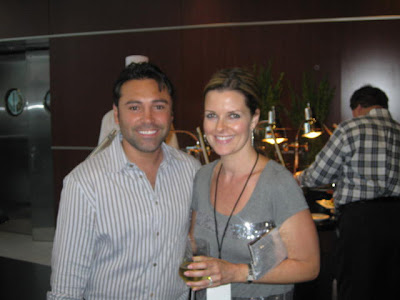 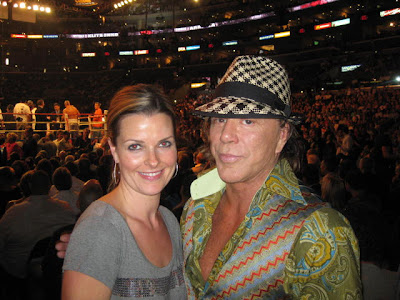 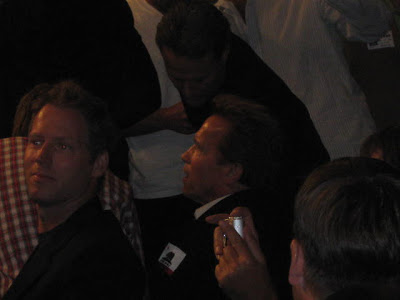 Arnold!! I would have tried to get a picture with him but he was whisked away very quickly after the fight was over. 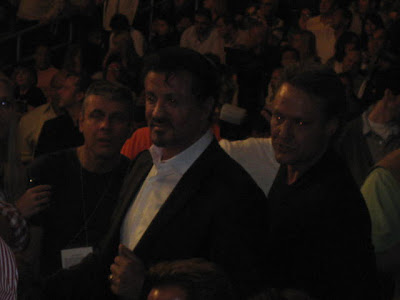 Stalone!! He was sitting near Arnold. Too much security. :( Here's a fight shot: 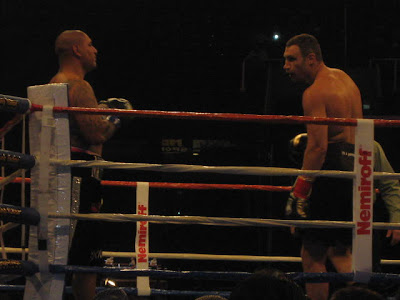 Our seats were really good....we were sitting in the floor section with all the celebs...so it wasn't so hard to get these great pics! 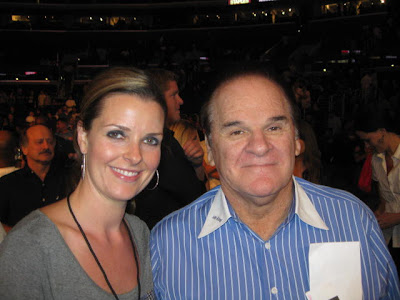 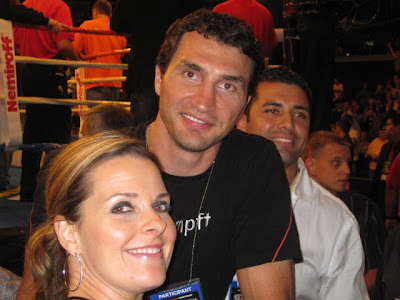 Vladimir Klitschko (the brother of the fighter-he is also a big boxer). 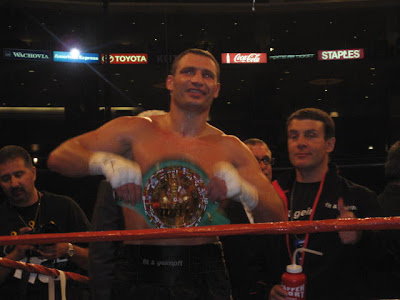 The winner: Vitali Klitschko
After the fight we met up with my brother, his wife and some friends for dinner at Hal's in Venice. I managed to get a shot of my pizza before I destroyed it. :) According to the menu, it had roasted pinenut sauce, organic guanciale (what's that?), heirloom tomatoes and california burrata. It was soooooo good!!!! 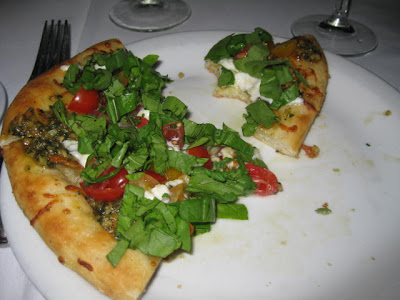 There may have been another glass of chardonnay.
We stayed at my brother's house that night. I had a much needed cup of coffee and a bowl of fresh pineapple in the morning. We met up with some other friends at Casa Del Mar (the hotel I got married at!) in Santa Monica for a late breakfast. I had an mushroom, asparagus and cheddar omelet with whole wheat dry toast and a vanilla non fat latte (sorry, no pic). Why do eggs and cheese taste so good the morning after a lot of wine?
We went over to my parent's house and hung out for a bit before it was time to meet up with my sister in law, more family and my kiddos for a early dinner at Souplantation. I didn't bother taking a picture because it looked exactly like the pictures I have recently taken (except for a couple pieces of pizza bread and little lava cake). ;) We drove back to San Diego and that was that.
So today I'm back on the healthy eating track. Hubby won't be home for dinner so it might be leftover Asian chicken noodles (with the funky vinegar flavor). Lucky me. :)
Thanks for reading!
Email Post