The weekend is here!!!! I bet the suspense is killing you.....what did I have for breakfast you ask??? Well....repeat meal offender here: multi grain English muffin with a tablespoon of Barney Butter and 3/4 cup of strawberries. But...I also had a cup of coffee with a couple tablespoons unsweetened vanilla almond milk and splash of sugar free vanilla syrup. 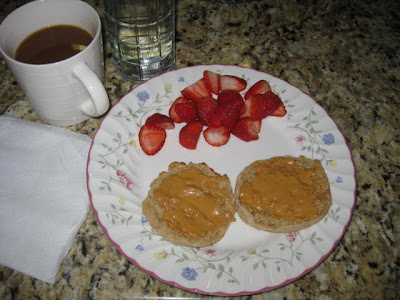 After taking the kids to school, I went to my Step and Sculpt class and had a great workout. Then I went and got my nails & toes done, and stopped at Subway for lunch. It looked like this: 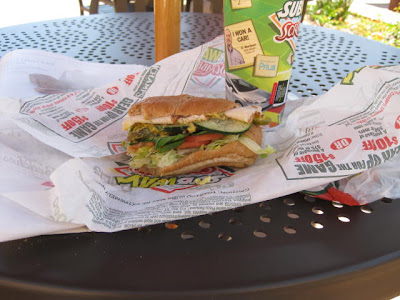 Six inch turkey on wheat with everything except olives. (No cheese, no mayo, no oil but LOTS of regular and spicy mustard, vinegar and lots of pepper). I really love me my Subway. :) I ran a bunch of errands (nothing exciting) and there just so happened to be a Golden Spoon next door to the Trader Joes I was at. Did I plan it that way....maybe. :) I had a small half Cake Batter, half Fudge Brownie. Nam Nam.
Went home and started getting the kids and I packed for tomorrow. Hubby and I are taking the kids over to my sister in law's house in Los Angeles to spend the night and we are going to the Klitchko boxing fight. Yes, another fight....I can't get enough. :)
So I decided to re-create a meal that I had in cooking class earlier in the week for tonight's dinner. It was the Salmon one with the Asian noodles. Well, I did a dumb thing. The recipe called for Rice Vinegar. I didn't have any plain rice vinegar so I used Seasoned Rice Vinegar. I know the whole time I was doing it that it probably wasn't a good idea but I did it anyway. Well, it was a little.....tangy. Not the best but also not the worst. I did make chicken for it instead of salmon since hubby doesn't like fish. The chicken was awesome though. I will make this recipe again but do it right next time. At least it looks nice. :) 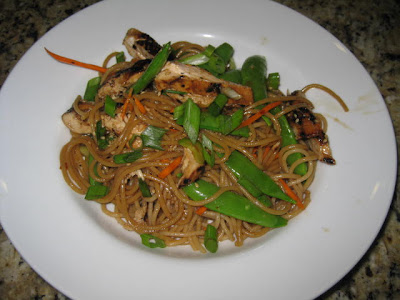 So now I'm enjoying a glass of leftover champagne from the rest of a bottle opened at my bunco party a few weeks ago. My friend Dina (hi!!!!) let me borrow this fabulous wine stopper thing that really seals it....the champagne is still bubbly!!! Amazing. (Yes Dina I still have it and haven't forgotten to return it). :)

So there won't be a post tomorrow night (don't cry)...I'm not bringing my laptop with me because I know I won't have any time to post. But stay tuned....hopefully I'll get some good shots of celebrities tomorrow night. Good night all!
Email Post
Labels: almond milk Barney Butter Golden Spoon