I picked up something quick for dinner when I was at Trader Joe’s yesterday: BBQ Chicken Pizza. 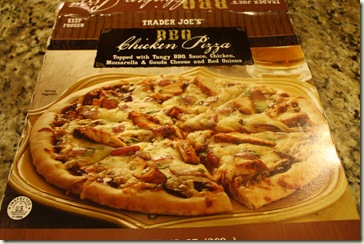 This probably my husband’s favorite kind of pizza. Me…not so much. I guess I was in a giving mood while at the store.

When I took the pizza out of the box, I was a bit shocked to see how small it was. My husband could easily eat the entire thing by himself. Still in a giving mood, I decided to eat a third of it and give the rest to him. I made it work by making a huge salad full of good stuff: chopped romaine, black beans, corn, shredded carrots, tomatoes and red onion all tossed with ranch dressing. 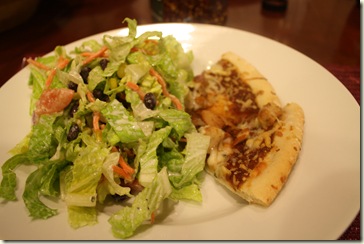 The pizza was actually pretty darn good. Crispy and just the right amount of barbeque sauce for me. My husband ended up dipping his in some more sauce but he enjoyed it as well. 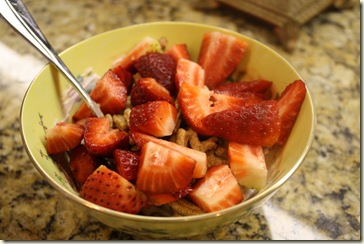 I took the kids to school, attended a meeting at the school and then went over to Great News for a cooking class.

Today’s class was taught by my favorite instructor, Phillis Carey and was entitled “Indian Cuisine with Ease”. Indian food is one of my favorite cuisines. I just love it!

The first plate had several recipes: 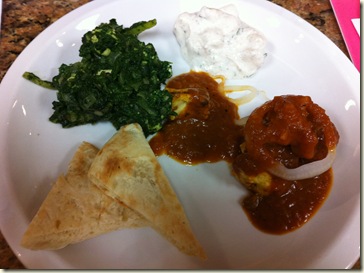 The Chicken Tikka Masala was delicious and perfectly comforting. I enjoyed the Saag Paneer with it and enjoyed learning how to make it. I think the next time I make my famous Indian Butter Chicken, I’ll make this to go with it. Now… the Raita would have been good without the bananas. I HATE bananas. Ugh. I’d make it with cucumbers. :)

The second plate of food also had a few different recipes: 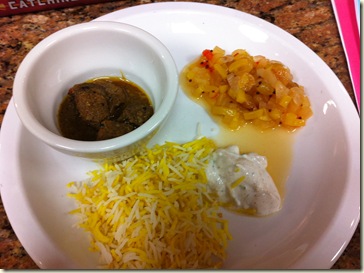 The Pork Vindaloo was out of this world. I wanted a huge bowl of it. I didn’t touch the Raita but I did try the Mango Chutney. Now you know I don’t like “fruit with my food” but it did taste pretty good. I wouldn’t ever request it or probably make it but that’s just how I am. :)

After class, I ran some errands and picked up the kids from school. Tonight is another chill night at home. Love it!

What is your favorite Indian dish?

Do you make Indian food at home?