Last night we went out to dinner with a couple of friends at Truluck's Seafood Steak and Crab House in La Jolla. We decided on a bottle of Chardonnay for the table: 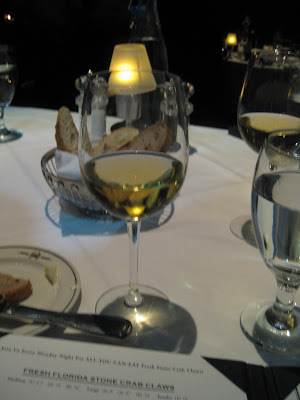 My friend and I decided to split the Tuna Tartare Tower (with crab, avocado and citrus soy reduction): 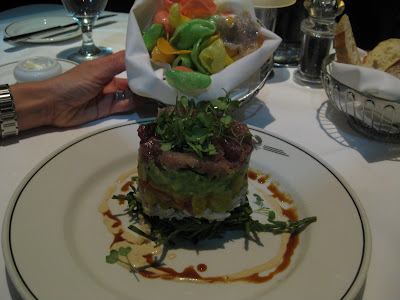 It was pretty good! It had pineapple in it which I wasn't a fan of, so I just pushed them to the side. The tower came with "shrimp chips" in all these crazy colors. You can see the basket of them above the tuna tower. I tried one and they just tasted like Asian tortilla chips. I can't think of a better way to explain it. I also had a couple pieces of their warm bread and butter. Mmmmm......
For my entree, the waiter recommend their Miso-Glazed Sea Bass (South Georgian Chilean seabass served with crab fried rice and chilled cucumber slaw): 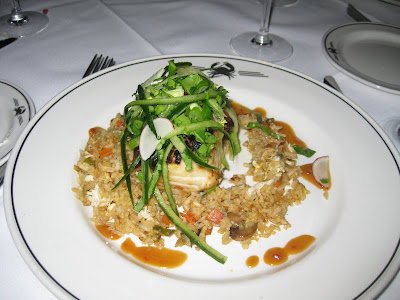 He was right on! It was excellent! The flavor combinations were fabulous and the seabass itself was delicious!
When they brought the dessert try, how could I resist?? 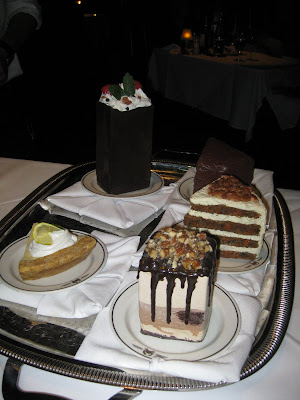 Check out that tall chocolate "bag" in the back.....its looks like a brown bag but it's made entirely of chocolate and had pound cake and cream cheese icing inside. I was tempted but hubby wanted the Mud pie: 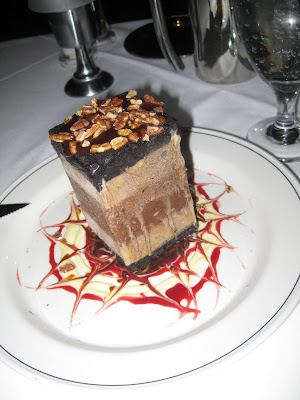 We practically licked the plate clean. I went to bed a very happy girl. I love splurge nights!! I definitely recommend Truluck's. The atmosphere was great (they had someone playing the piano in the bar), the service was spot-on and the food was delicious!!

Here are the components for my breakfast this morning: 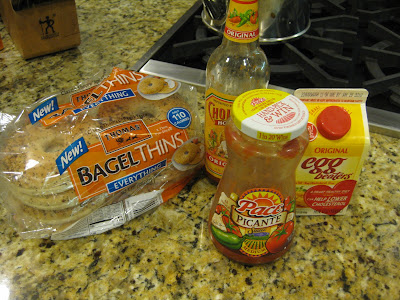 An egg beater sandwich with some salsa mixed in on a bagel thin with a slice of light swiss cheese and some strawberries on the side: 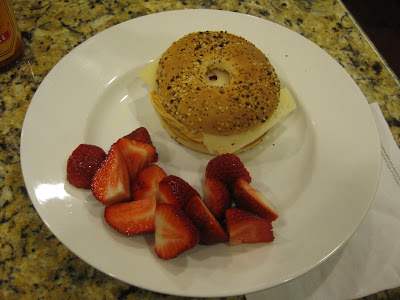 I took the kids to school, picked up my son's birthday cake for his party tomorrow and came home. I don't have a picture of the Oreo cake yet (we are serving it tonight) but it doesn't look as nice as I'd hoped. I hope it tastes good at least!!!

Before I left for Zumba, I decided to have a snack because I knew I wouldn't be eating lunch until much later. I had a light wheat English muffin with Barney Butter: 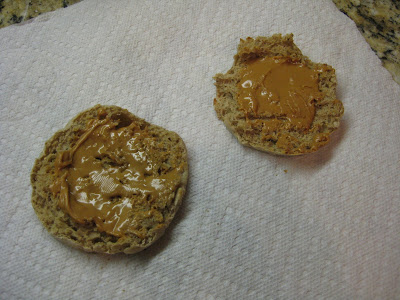 That actually did the trick quite well! I rocked out in Zumba, then the hubby and I went to my son's class for his birthday celebration. Afterwards we picked up my daughter and came home. I had a few calls to make and then it was finally lunch time. I was really craving pasta so that's exactly what I had: 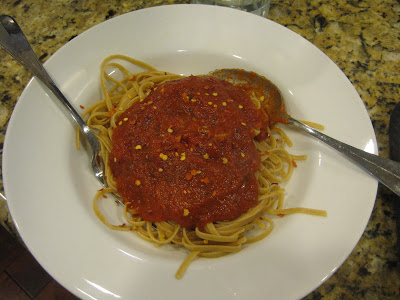 I decided to bake another dessert (for tonight if the Oreo Cake bombs or for tomorrow when our family arrives). I only had one egg so I had to find a recipe that only needed just the one. I went with Blonde Brownies: 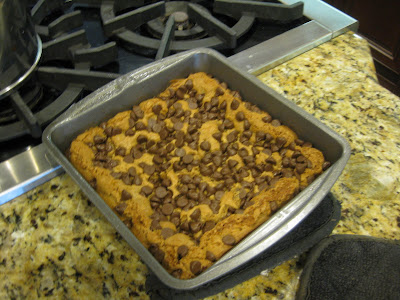 They are cooling on the counter right now so I can't tell you how they taste yet.
We are going to a friend's house for dinner tonight. Cross your fingers that the Oreo Cake is a success!
Email Post
Labels: Bagel Thins Barney Butter Egg Beaters Truluck's Zumba