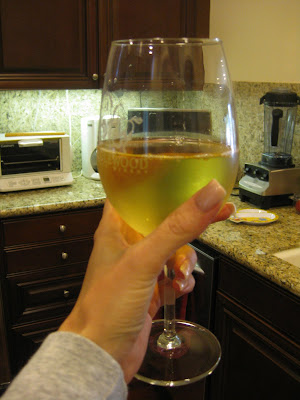 Ahhh....so good!! I tried another new recipe: Tex-Mex Lasagna from Cooking Light. The only thing I would do differently is to drain the tomatoes next time. Otherwise, it was really good!!! 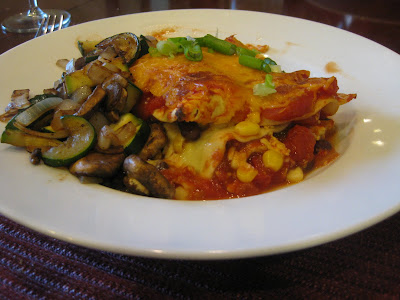 I served it with my normal veggie sautee. Adding veggies is such a good way to fill you up without adding tons of calories.

I had a enough points left for my beautiful Special K granola with almond milk for dessert: 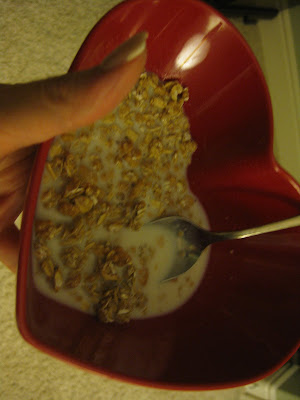 Breakfast was a successful experiment. I tried another one of hungrygirl's egg mugs. It was the Denver omelet version with bell pepper, onions, cheese and ham (I used turkey). I added some salsa to it and voila! 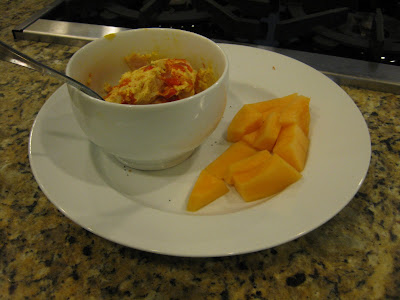 I put some Cholula on top and it was excellent!! I love her egg mug recipes! I went to Lisa's for the Stretch video (boring) from P90X and came home and made lunch. I had some leftover Fast & Easy Lasagna from the other night. On the side, was a big salad with balsamic and veggies: 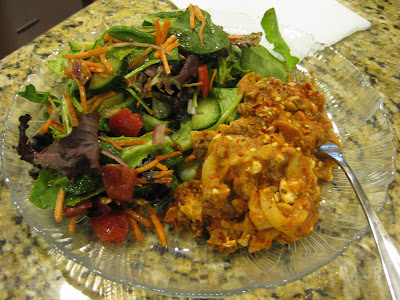 Then I decided it was time to bake! I miss baking! I tried two new recipes. First up was Banana Chocolate Chip Bread. I really liked this. The kids liked it too which was a plus. Hubby liked it....I saw him eat at least three slices.

Next was Low Fat Blueberry Bran Muffins. I didn't have any blueberries so they just were regular bran muffins. I used Fiber One cereal instead of the wheat bran and they turned out yummy! They would taste really good with raisins and cinnamon so I'll add those next time. I decided to have a little bit of each treat with some strawberries for a snack: 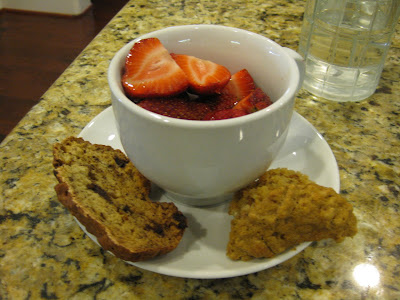 I think we are going to go out to dinner tonight so I need to take care of some stuff before then. I hope everyone had a great weekend!
Email Post
Labels: almond milk Cholula fiber one granola P90X Special K