I was looking forward to last night’s leftovers. I had frozen my sister in law’s pasta and “gravy” that she had given to me and decided last night was the night to eat it! I paired it with a Caesar salad. 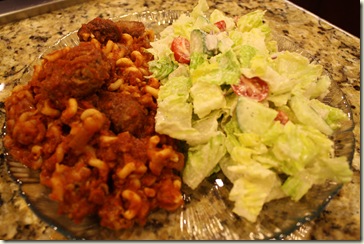 Great dinner! My sister in law, Stephanie, makes the best sauce in the world. She learned how to make it from her Italian grandmother. It has sausage and meatballs and is out of this world. She calls it gravy and I think it’s funny. I guess it’s an Italian thing.  :)

Breakfast this morning was scrambled egg beaters with sautéed spinach, zucchini, red bell peppers and topped with shredded cheddar cheese. I added salsa on the side after the picture was taken. 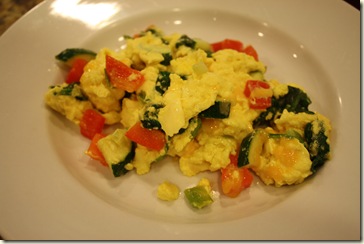 Today I attended a cooking class at Great News taught by my favorite instructor, Phillis Carey. Today’s class was titled “Delicious Salmon Specialties.” Phillis told a funny story that she used to really not like fish so she developed all sorts of recipes where the fish is covered in a yummy sauce or something else to mask the fish flavor. She now likes fish (salmon being her favorite) but still enjoys putting delicious toppings/sauces on it.

The first recipe was Wasabi Salmon Patties with Ginger-Wasabi Aioli: 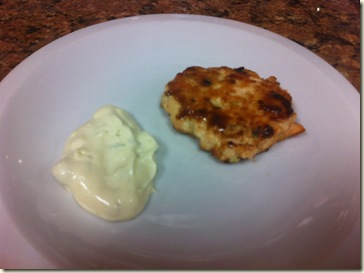 Loved this! It had a great Asian flavor to it. I would love to make this bigger and turn it into a burger and put the wasabi aioli on the toasted bun!

The second recipe was Maple-Orange Glazed Salmon with an Almond Crust: 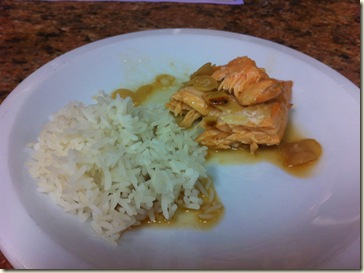 This also had a great Asian flavor (the sauce had soy sauce in it). I loved the crunch of the almonds on top. 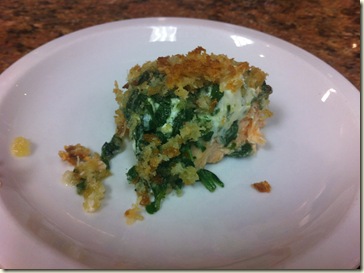 This dish was so rich and delicious! It would be a perfect company dish!

The next recipe was Pecan Crusted Salmon with Sweet Pepper Aioli: 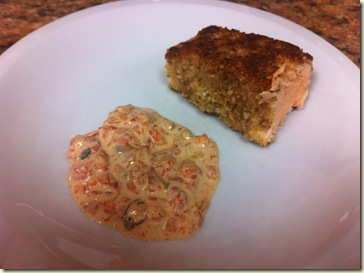 This one was my least favorite but it was still good. I liked the pecan crust on the salmon but the aioli was too sweet for me. 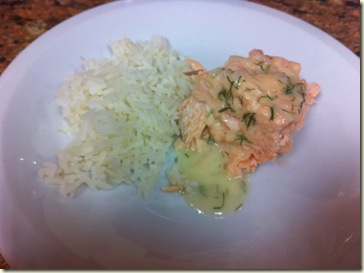 I know it doesn’t look like a pinwheel but that’s because all of them had to be cut into smaller pieces to serve. Basically you take a 3lb. salmon fillet and slice it lengthwise into about 8 long strips. You roll each strip up into a pinwheel, secure with skewers and poach in butter. Then a fabulous beurre blanc is drizzled over the top. Heaven. This one was my favorite!

After class, I ran some errands, including going to Costco (love) and then came home. My husband is working late again tonight so I’m on my own for dinner again. I wonder what leftovers I will have…..The suspense!

What do you call spaghetti sauce? Marinara? Gravy?

Are you a fan of fish? Favorite kind?