Happy Saturday Folks! I love Saturday mornings…now that I don’t have to get up at the crack of dawn to run!

Last night I had a bowl of Cheerios Cinnamon Burst cereal with almond milk. 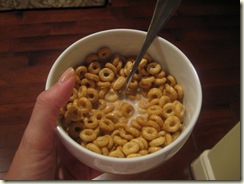 When I woke up this morning, I felt the need to bake. I haven’t really cooked/baked in awhile and I had the itch. What to make?? Banana bread! My kids have fallen in love with it lately so I thought it would be a great treat. Now, most of you know that I hate bananas. Yes, I know hate is a strong word. I hate bananas. But I love bananas in baked goods. Go figure. 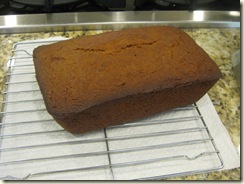 The recipe I chose is from one of my favorite blogs, Pam’s For The Love of Cooking. Her recipes never fail. This was no exception. I followed the recipe exactly except that I omitted the nuts. The kids aren’t a fan. The bread was perfectly flavored  and moist. Most of it is now gone.

For breakfast I had a bowl of watermelon and a new bar (to me): Luna’s Protein bar in Chocolate Peanut Butter. 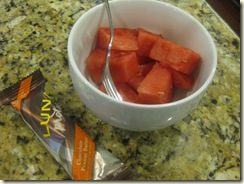 The bar was ok. It’s a lot of calories (190) for a little bar in my opinion but I guess it’s not much better calorie wise than a Larabar. The taste was just ok. I have one other flavor to try so we’ll see.

I went to my spin class and it felt great to get back on the spin bike again!

Lunch was some leftover pulled chicken I found in the freezer on a sandwich thin with a big salad. 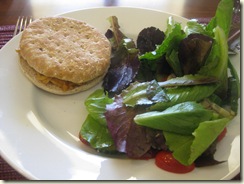 Later in the afternoon our family went swimming. I love swimming on hot days! From there it was snack time! 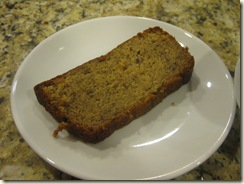 Banana bread!! I had some more watermelon as well. Since the banana bread disappeared so fast I decided to make some zucchini bread. It’s in the oven now…if it turns out…I’ll share the recipe with you tomorrow.

Tonight we are going to my favorite restaurant, Firenze, with some friends for dinner. I’m having a pre-dinner glass of wine as I type this. :) 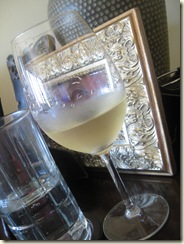 Is there anything you don’t like but when it’s cooked/baked you’ll eat it?