Last night was a barbeque kind of night. The kids swam with my husband while I cooked away. Last night also called for a glass of refreshing white wine! 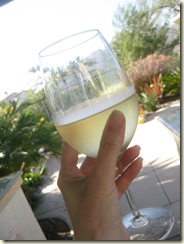 I put a couple of chicken kebobs on the grill with some corn (wrapped in foil with a little butter and kosher salt) and a pot of baked beans. 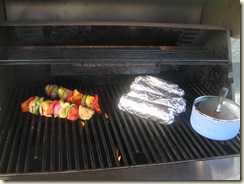 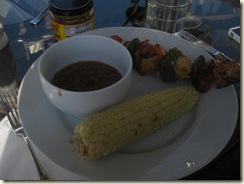 My husband and I kept saying “Mmm this is so good!” Why don’t be barbeque more often?

This morning I brought back an old favorite for breakfast: raisin bread. I topped it with peanut butter and had some watermelon on the side. I took the kids to the bus for camp and went to the post office to mail some packages. Then it was time for Cardio Muscle class. I’m already sore.

When I came home, I decided that chili sounded good. Strange with it being so hot outside that I wanted chili but sometimes you have to roll with it. 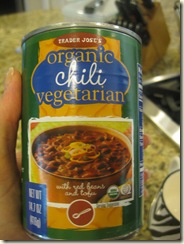 I’ve never tried this Trader Joe’s chili before. I saw that it said “vegetarian” but when I put it in the pot, it looked like there was meat in it. I read the ingredients and found that there was seasoned tofu in it. I’m not a big tofu or fake meat fan so I was skeptical. 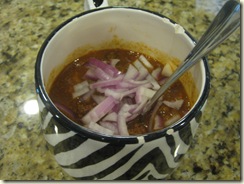 Verdict: It was pretty good. Not the best but not the worst either. I think if I didn’t know that it was vegetarian, I would have thought there was actual meat in it.

I have to pick up the kids at the bus stop soon. I have Bunco tonight and I’m excited. I haven’t seen my friends in awhile!!

Are you a tofu and/or fake meat fan?

Favorite canned chili? I want to try Amy’s chili next. :)