I never thought I could be disappointed in a Giada de Laurentiis recipe but it happened last night. I tried her Italian Baked Chicken and Pastina. I used penne for the pasta. After reading the reviews upon which some people thought the dish was bland, I followed some suggestions and added Italian seasoning to the chicken while it was cooking as well as added red bell peppers and shredded carrots. 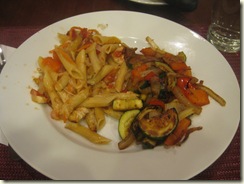 I sautéed some zucchini, onions and red bell peppers to go on the side. The dish was bland. Hubby added some marinara to his and it tasted better. Boo Hoo.

Today is my daughter’s 4th birthday! She woke up excited and ready to start her day. So did I! :) I had an English muffin with Barney Butter and a side of cantaloupe for breakfast: 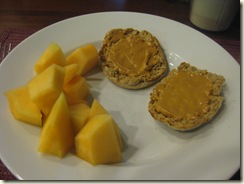 I took both kids to school. I had to go to a room mom meeting at my daughter’s school an hour later so I went for a walk around the neighborhood. After the meeting, I came home to change and make lunch. I made a huge salad using some leftover chicken I had cooked up last night. I used half in the bland, tasteless pasta. 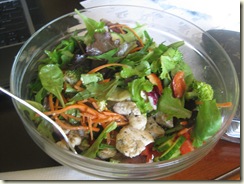 I ran to the grocery store to buy ice cream sandwiches for my daughter’s birthday party at school. I headed over to her school and took part in her classroom’s celebration. So cute!! I had another hour to kill before she was out of school so I ran over to Starbucks for a Vanilla Rooibos tea.

I picked her up and then picked up my son. We came home and I decorated my daughter’s cake. She wanted a purple cake with sprinkles. 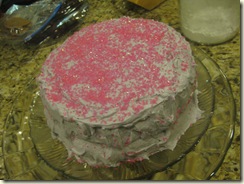 It’s not the prettiest looking thing but she was pleased. :)

My daughter got to pick what she wanted for dinner. Souplantation! Again. 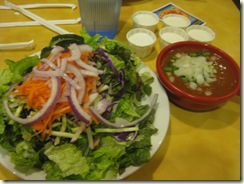 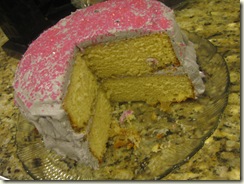 I had a small slice: 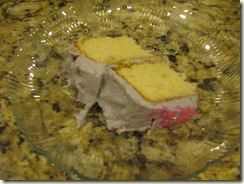 The frosting was pretty good but the cake was a little dry. My daughter was happy and that’s all that matters.

What was your favorite kind of cake when you were younger?