Oh my! What a whirlwind! We ended up getting tickets for last night's Laker game so I was out late again! But it was worth it because it was a blast!

Let's rewind to Wednesday night. We decided to take the kids and meet some friends at our club for dinner. We all started with a mixed green salad with goat cheese, candied pecans and cranberries with a balsamic vinaigrette: 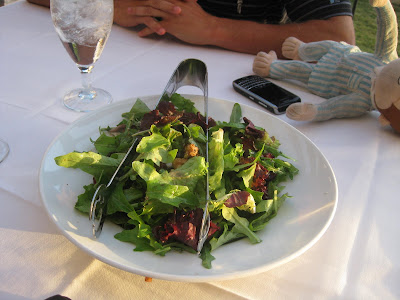 You like my daughter's Curious George monkey? :) I ordered the half chicken and extra veggies (no rice) for my entree: 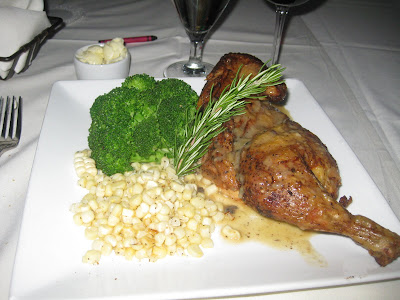 It was huge! I have a ton of leftover chicken! When my hubby suggesting splitting an ice cream sundae, I had a hard time saying no. (I guess I'm having a hard time with that lately!): 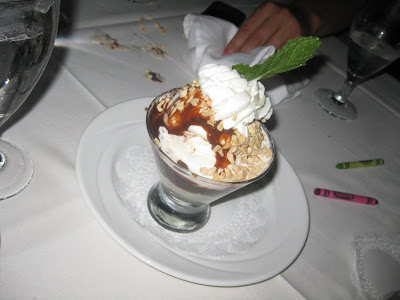 We came home and called it a night. Yesterday morning's breakfast was an egg beater sandwich on a bagel thin with low fat swiss cheese, turkey slices, spinach and Dijon mustard. On the side...strawberries. :) 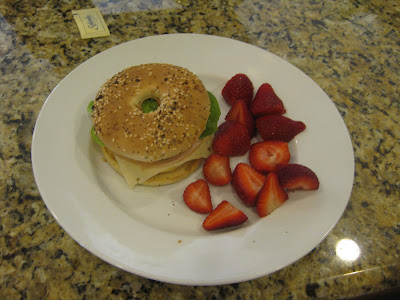 I went to Zumba and came home and quickly got ready to leave for the Laker game. We had to pick up a bunch of friends along the way. I wasn't sure when or if lunch would happen so I grabbed a box of Wheat Thins on the way out the door. Good call....we didn't get anything else to eat until about 4PM. We decided to park ourselves at the JW Marriott hotel next to the Staples Center until it was time to go into the game. I had a glass of Pinot Grigio: 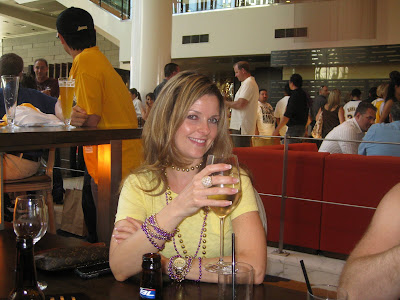 I put my Madri Gras purple and gold beads to good use! We ordered a bunch of appetizers for the table including hummus: 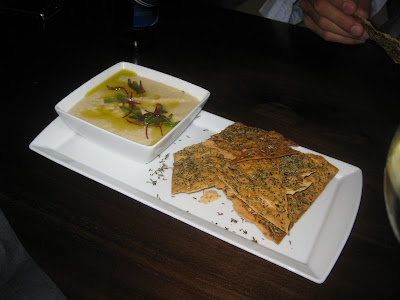 The rest of the appetizers never got photographed because the guys attacked them like animals. No joke. We had margarita pizzas, prawn cocktail and calamari. Yum! Then it was time to head over to the game! 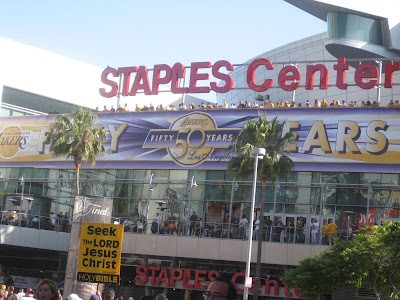 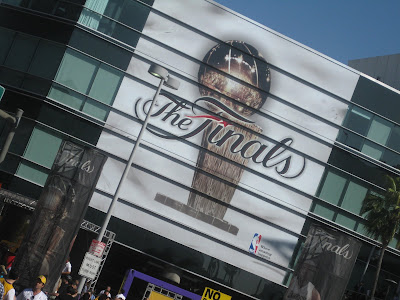 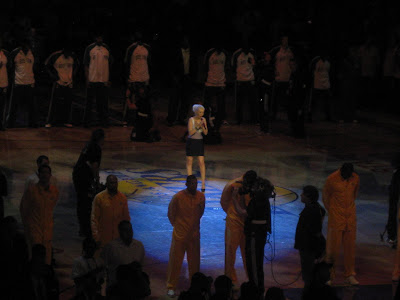 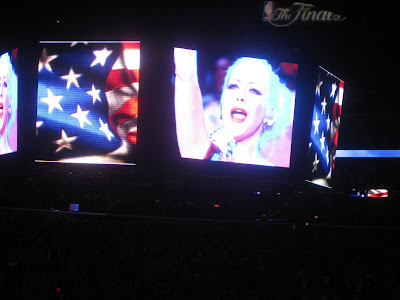 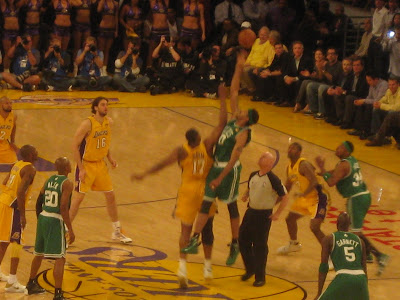 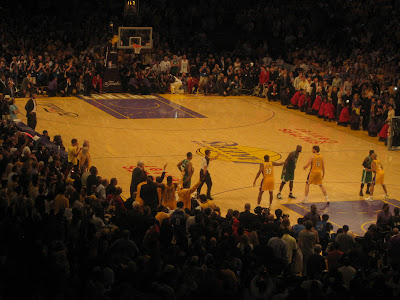 We won! Yes! It was such an exciting game! Way too close the whole time! My heart was pounding like crazy at the end!

Celebration time! Hubby and I: 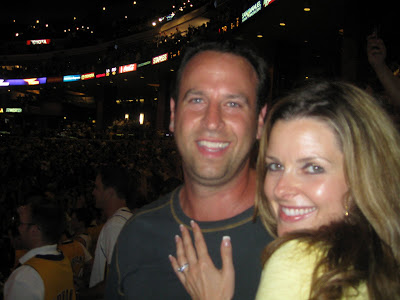 It was raining confetti! 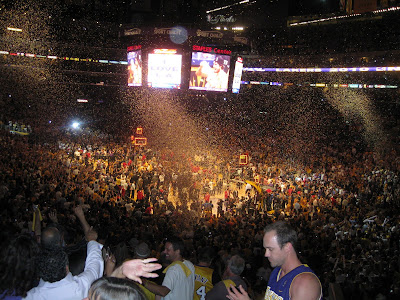 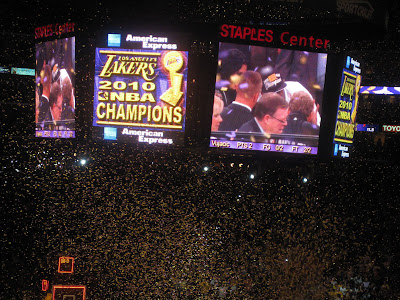 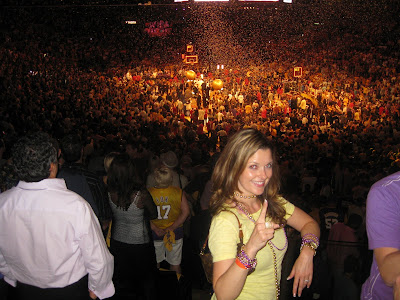 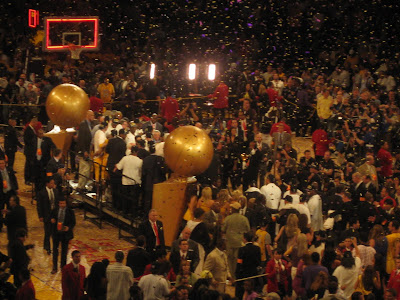 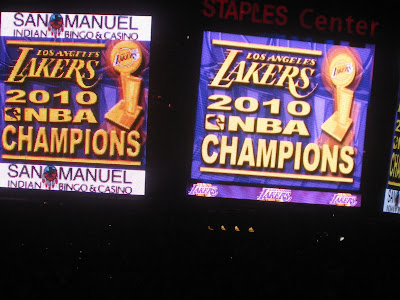 We watched the ceremony and then made our way up to the night club. We danced for awhile and had such a fun time! At one point, I look over and there's Chris Brown dancing right next to me. Crazy! All that dancing worked up an appetite! We went over to our old college hang out: Chanos. It basically a shack that sells Mexican food...but it is sooooo good! I had a bean and cheese burrito. Then it was time to head on home. I finally made it into bed around 2:30Am. That is way too late for this grandma!!

This morning was a little rough getting up as you can imagine. But I made some coffee and some breakfast: light wheat English muffin with Barney Butter, some strawberries and the last of my watermelon: 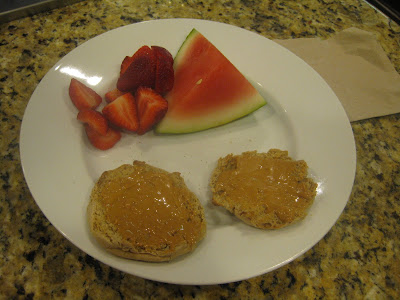 I felt a lot better after breakfast and decided to do two back to back workout classes: Cardio Muscle and Zumba. Somehow, I survived both classes and managed to have a good time too! I know I keep saying this but I'm going to get my act cleaned up and try and drop a few pounds! Let's wish me luck k? :)

Afterwards, I grabbed a quick sandwich at Subway: 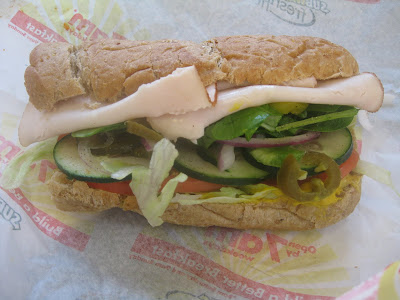 I got my nails done and came home to get the kids for their last swim lesson. I ate an apple and a string cheese on the way: 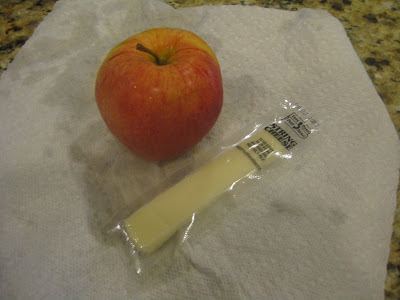 We got home and I started the mounds of laundry that have been piling up. After awhile it was dinner time so I had pulled some random Indian food leftovers out of the freezer: 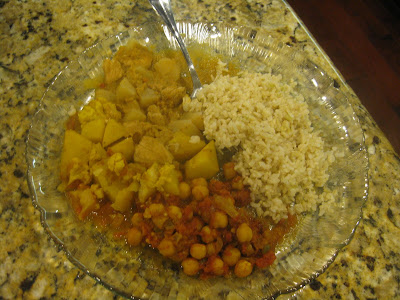 That's tomato chickpea curry, chicken vindaloo and potatoes and cauliflower. I threw some brown rice on the side and called it dinner. Those dishes had been in the freezer for awhile so they didn't have all the flavor that I had hoped for but at least it was easy right?

This lady is crazy tired so I'm going to hit the hay as soon as I get the kiddos to bed. :)

Any weekend plans? Our friends just had twins and are having a big party on Sunday so we'll be going to that. Hopefully I can avoid the cake right?
Email Post
Labels: Bagel Thins Barney Butter Egg Beaters Subway Zumba