Last night I got the kiddos all tucked in and I had one of these babies: 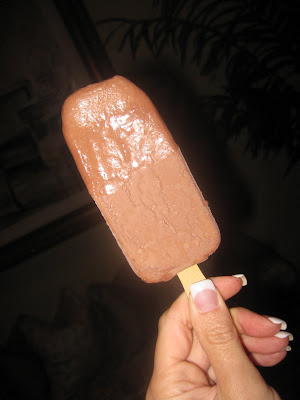 A Weight Watchers 1 point fudge bar. These are really good. :) I watched a little TV and was asleep before 9:30. Fabulous sleep! Everything I could have dreamed of! Can you tell I'm excited! Your day is so much better after a great night's sleep. Breakfast was another egg beater sandwich on a bagel thin. This time, I mixed a little salsa in my eggs before I microwaved them. I put a slice of low fat swiss cheese and some spinach on it. Cantaloupe was the fruit of choice: 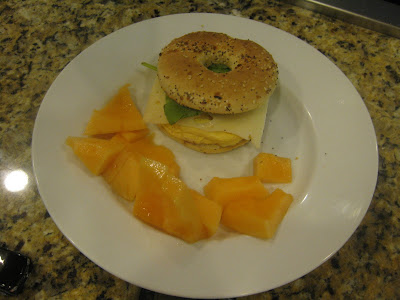 After bit, it was time for spin class. I love the instructor on Saturdays. I had such a great workout! I came home, showered, finished up the laundry and before I knew it, it was lunch time. I made a turkey and swiss sandwich on wheat bread with lettuce, red onion, tomato and mustard. I had a Amy's vegetable barley soup on the side: 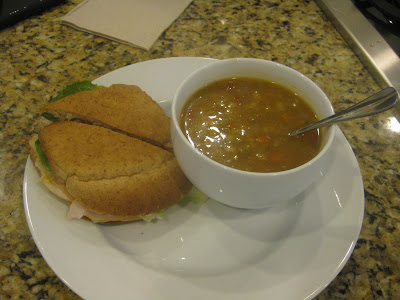 I ended up eating lunch outside with the kids. It was their idea and it was a great one! Beautiful day. After lunch, I read a magazine while they played. After cleaning up the house a bit and doing some random stuff, I decided to bust out some cereal and almond milk for a snack: 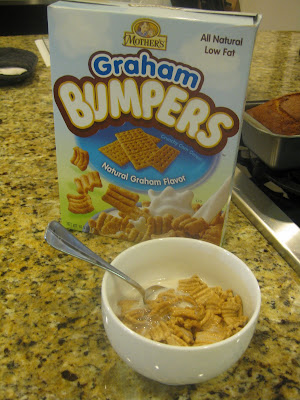 In the corner is some banana bread I baked. I had a few bananas that looked pretty scary so I whipped up my mom's favorite banana bread to give her the next time I see her. The recipe is in the Pillsbury cookbook and it's my favorite.

I spent the rest of the afternoon doing some more picking up, catching up on emails/blogs and getting the kids stuff ready for summer camp on Monday. Everything has to be labeled and it takes awhile believe it or not.
Dinner time rolled around and I made a bowl of leftovers: brown rice, chicken & corn & broccoli from Wednesday's dinner, black beans, cilantro, tomatoes, tons of salsa and Cholula: 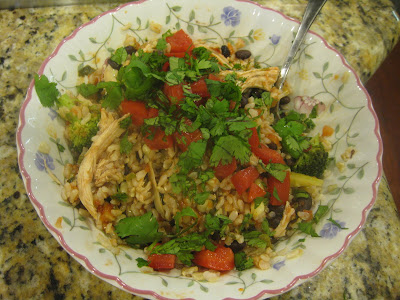 Wow! That was really good!!! I was quite impressed by my "garbage bowl"!
The kids are in their pj's and I think I'm going to go put mine on now. :) I have a get up a little earlier tomorrow to get ready for the party we are going to and to pick up the hubby at the airport. He's at a bachelor party. Poor guy. :)
Read any good books lately? I'm reading The Help right now (loving it!) and need to get some new ones lined up!
Email Post
Labels: almond milk Amy's Bagel Thins Cholula Egg Beaters Weight Watchers