Happy St. Patrick’s Day! Did you wear green? Or drink some green beer? I wore green but no green beer here. Not a fan of beer so I don’t think the color green would enhance it any.

Last night I went to my husband’s work party. I enjoyed some wine as soon as I arrived. 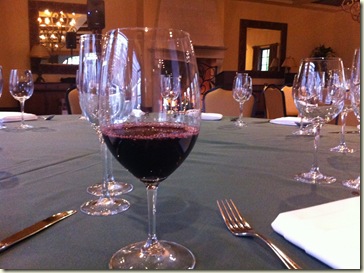 When it was time for dinner, the buffet line was really long but no one was at the salad bar line. Score! 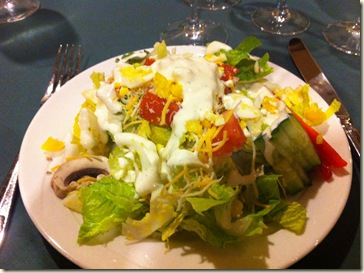 The salad rocked. I put a bit of everything on it. I was tempted to go back for seconds but saw that the regular buffet line died down so I decided to go for that. I had a piece of prime rib and an enchilada. Random combination yes, but oh so delicious! No photo….I was talking to people I didn’t know very well and felt weird bringing out the camera at that moment.

I did, however, snap a photo of dessert. 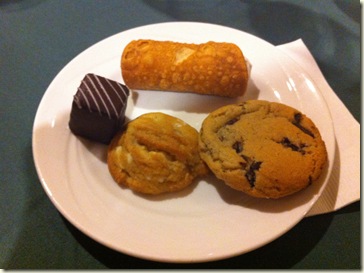 There was a dessert table filled with all kind of goodies. The two cookies were the best. Again, I was tempted to go back for seconds but I restrained.

This rainy morning called for an egg beater scramble for breakfast. 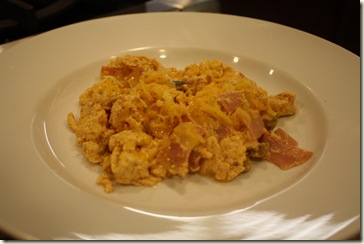 I normally put veggies in it but we are all out. I really need to go grocery shopping. In the scramble was egg beaters, diced ham, salsa and shredded cheddar cheese.

After breakfast I went to spin class and had an awesome workout! I left there a sweaty mess. I showered and put some laundry away. We took my son to boy scouts and went to lunch at Souplantation. 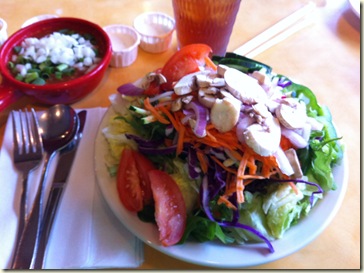 My salad was so tall I’m surprised it all stayed on the plate.

My son was being picked up after boy scouts for a sleepover party so it was very quiet at our house. I took a nap and did absolutely nothing for the rest of the day. It was fabulous. I’m always busy doing this and that around the house so it felt great to not do anything at all.

Eventually we hopped in the car and went to Tio Leo’s Mexican restaurant for dinner. I Love their chips and salsa. 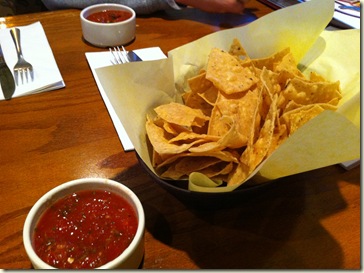 I ordered the pollo asado tacos. They come with wheat tortillas and a side of black beans and a corn salad. 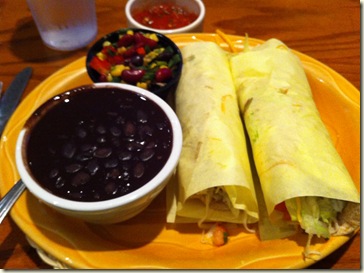 Delicious and not too unhealthy. I ate both tacos and the salad and made a small dent in the beans. It was a lot of black beans.

Now I’m back at home in my pajamas. Can all days be like this?

When was the last time you had a day of nothingness?