Before dinner with some friends last night, we stopped by another friends’ house who had just had a baby. Every time I see a newborn baby, I forget how small they are! We had a great time visiting and wished them luck on the first night home with their new baby. :)

After that it was off to our 8:00 dinner at World Famous in Pacific Beach. We started off with some wine and appetizers. 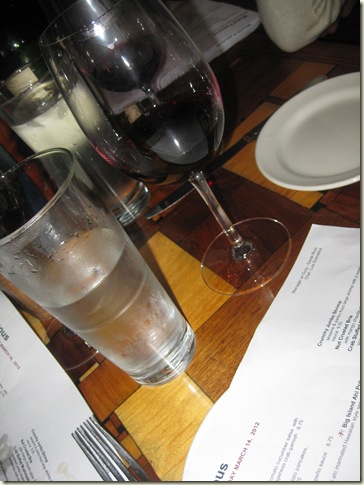 We shared the Nut Crusted Brie. It was delicious on their crusty bread. 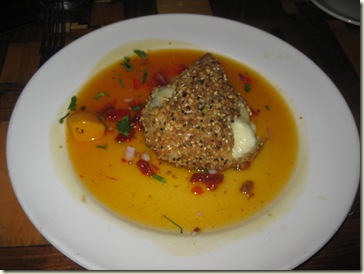 Each of the entrees came with a house salad which I enjoyed. 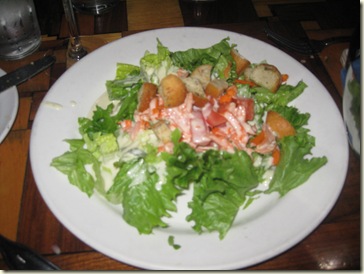 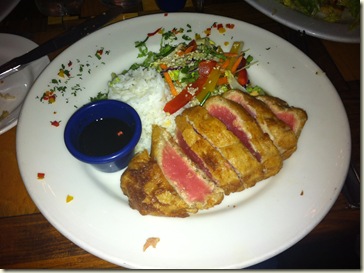 I ended up not liking it fried so I removed as much of the tempura crust as possible. I ate the tuna but didn’t enjoy the rice or veggies. They were both bland and boring. My husband thoroughly enjoyed his dinner though! This was my first experience at World Famous. Even though I wasn’t excited about my meal, I would definitely go back and give it another chance. When we left at 10pm (WAY past my bedtime) it was PACKED. I guess it’s a college type town and it’s full of bars but I was so surprised all those people were out that late on a Wednesday night. Ha-ha! I’m old.

After not-enough-sleep-for-my-standards, I got up at got ready for the day. Breakfast was a sandwich made with egg beaters and cheese on an English muffin with some cantaloupe on the side. 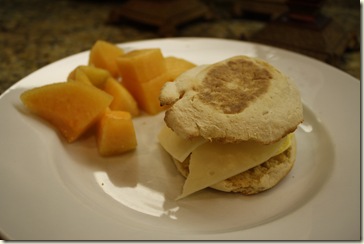 I took the kids to school and went to Great News for a cooking class. Today’s class was taught by my favorite instructor, Phillis Carey, and was entitled “Mushroom Mania.” Quick side note: I used to hate mushrooms. They were in so many dishes that I liked so I decided to keep trying them until I liked them. It worked!!

The first recipe was Polenta with Corn Topped with Herbed Mixed Mushrooms and Prosciutto. 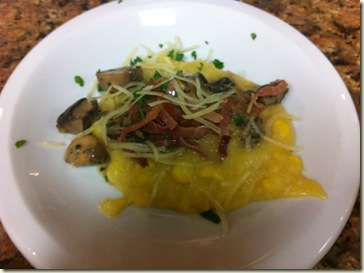 I really loved this! The polenta was so creamy and delicious and the mushrooms mixed it nicely. Great flavors! 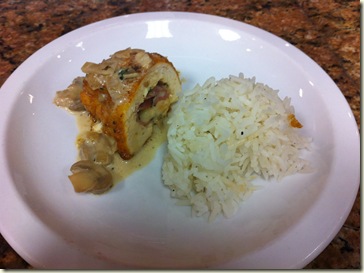 Another winner! The chicken was fabulous with ham and cheese inside and the sauce was delicious!

The next plate had two different recipes: Roasted Portobello Mushroom and Fontina Crostini and Risotto with Chicken and Crimini Mushrooms. 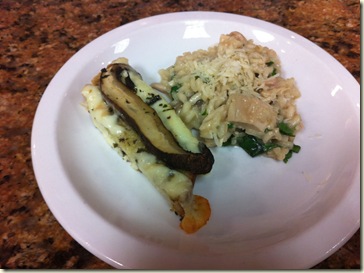 The risotto rocked. It was so comforting and creamy. I really want to make this one soon! The crostini was also good and would make a great appetizer at a party.

The last recipe was Pan-Roasted Pork Tenderloin with Mushroom Bourbon Sauce and Roasted Potatoes with Sage. 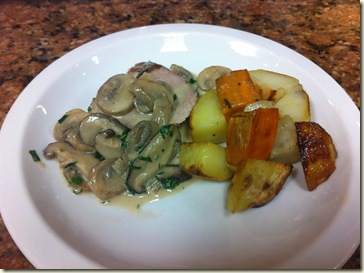 Let me start off by saying the potatoes knocked my socks off.  There were red potatoes and both orange-fleshed and yellow-fleshed sweet potatoes combined with sage leaves, oil olive and salt, roasted in the oven. I could have eaten a huge bowl of just the potatoes! The pork was good too, by the way. :)

After class, I went to my son’s parent-teacher conference (all good news!) and then brought the kids home from school. I’m staying in tonight and I couldn’t be happier about it!