I have had so many good eats in the last 24 hours. I wish I could relive it all again. Especially last night’s dinner at Phil’s BBQ with some friends. As soon as I arrived, my friend Alicia had a glass of wine waiting for me. Now, that’s a good friend! 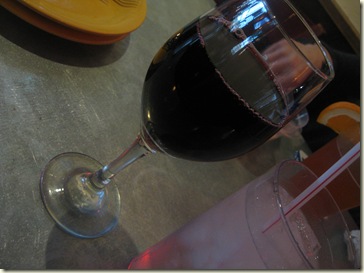 We all shared onion rings while we waited for our food to come. 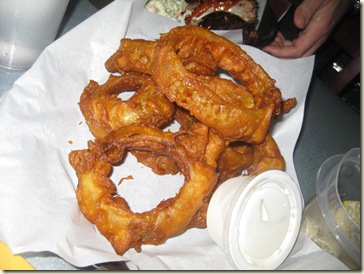 They look really healthy don’t they? :) Ah, but they were so delicious! I was able to control myself and only ate two. But let’s get real….I was saving room for the main event. 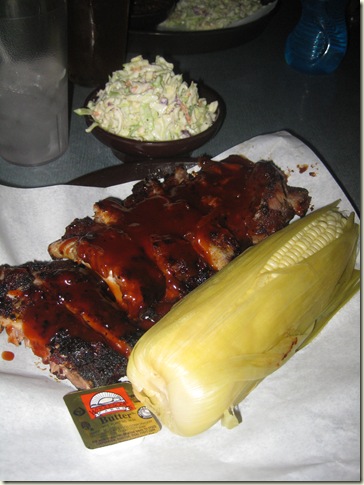 Half rack of baby back ribs, corn on the cob and cole slaw. Perfection. I think I did announce last night that I did not want the moment to end. But it did…and at least when I went to sleep last night, I had a big smile on my face.

I was all about my homemade granola this morning. I put it on top of some blueberry Chobani yogurt and added strawberries and blueberries. 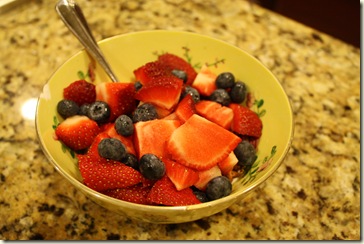 After taking the kids to school, I went to Starbucks for a green tea and then went to a cooking class at Great News. Today’s class was taught by Phillis Carey and was entitled “Easter Brunch.” I love all things brunch foods so I was more than excited for today’s class. 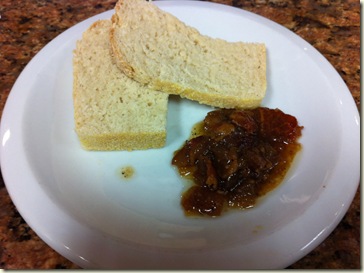 HOLY CRAP. BACON JAM. If I could swim in a sea of bacon jam, the world would be a fabulous place. I think we the phrase “it’s the jam!” was made up, it was referring to bacon jam. I need to have more of this in my life.

The English muffin bread rocked too. :) I make a similar bread and it’s so great toasted with butter and honey but bacon jam takes it to a whole new level. 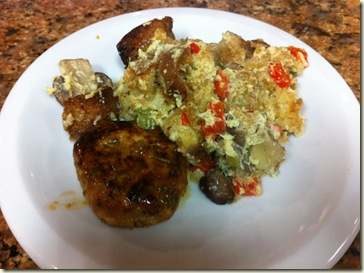 This was a plate of goodness. I love savory bread puddings and this one did not disappoint. The sausage was good too….especially the sauce on it! 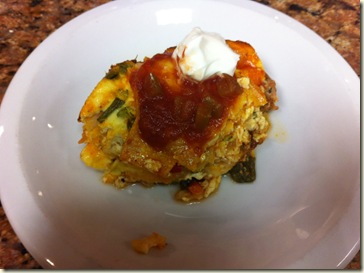 Another winner! This was basically a layered breakfast casserole type of dish, which I love.

Lastly was Ricotta and Orange Blintzes with Strawberry Sauce. 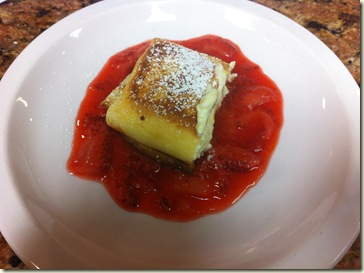 I’m not a blintz fan so I really cannot comment. It tasted fine and everyone around me seemed to like it. I don’t know why I don’t like blintzes.

After class, I went to Costco and picked the kids up from school. I’m about to get dinner started….another new recipe tonight!

Favorite dish(es) to serve/eat at a brunch?

Have you ever had bacon jam before?