After being up for more than 30 hours after my red eye flight back from Hawaii, there were a few things that helped me recover.

The first was a power nap Saturday afternoon. I laid down just to rest a bit when all of a sudden my husband woke me up informing that it was time to go to dinner. We had promised the kids that we’d take them to PF Changs. I was less than thrilled to get up but I was hungry.

We had a coupon for free lettuce wraps that was expiring so we cashed that in. 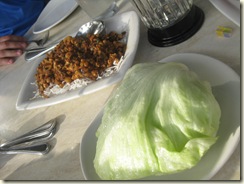 We split Chang’s Spicy Chicken (my son ate most of this!), Sesame Chicken…. 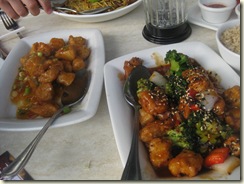 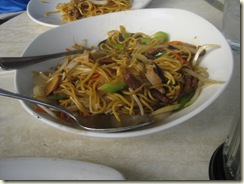 I had a bit (a lot) of everything with brown rice. I felt SO MUCH better after that awesome meal!!

We got home and went to bed….FINALLY!!!!

Sunday morning the hubby and kids let me sleep in. YES!!! When I woke up, they had already completed the project that I wanted to complete that day: taking the baby gate down from around the pool. Thanks guys!!

My husband decided to make his “famous pancakes” for breakfast. Usually I don’t eat them because I don’t feel like pancakes fill me up but since we were out of most groceries and I didn’t feel like cooking, I had some. 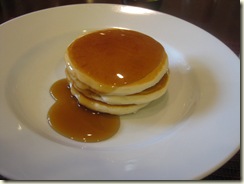 Delicious. It was the perfect “sleep deprived hangover” breakfast!! Too bad I was hungry an hour later.

I was still in my pajamas when lunch rolled around. I didn’t know what to make for lunch so I seared around and came up with Costco frozen pizza and a salad. Good thing my romaine was still decent! 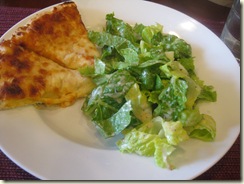 Then I finally showered and went to the grocery store to pick up some fresh fruit and veggies and dinner for the night. My sister in law and brother in law and their kids came over.

I barbequed chicken kabobs, corn, baked beans and hot dogs for the kids. 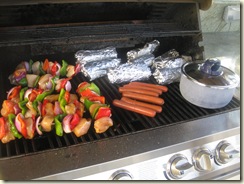 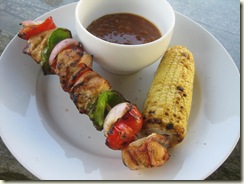 Everybody went home, I cleaned up, the kids went to bed and then I got in bed. Hubby and I watched Entourage (love this show!) and then somehow stayed up until midnight talking! That’s way too late for me!

I was in the cereal mood this morning so I had a bowl of Cinnamon Burst Cheerios, Fiber One cereal, strawberries and almond milk. 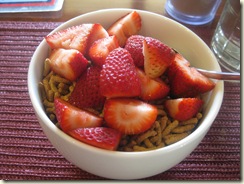 I took the kids to the bus for camp and went to Cardio Muscle class. It was nice getting back in the gym!

I spent the rest of the day paying bills, cleaning up my inbox and reading blogs. My desk is a lot cleaner now! I broke for lunch at some point and made a big tuna salad. 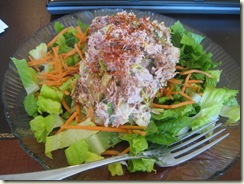 On the way to pick up the kids I ate an apple and a Babybel light cheese. 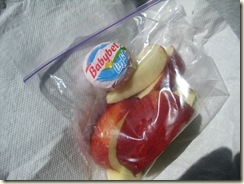 Hubby is working late tonight and I have BBQ leftovers in the fridge. Dinner is easy tonight!

Do you have a TV in your bedroom? I love watching TV in bed! I don’t care if it’s bad. I sleep just fine. :)