I know the suspense is killing you….you are dying to know how I did on my healthy eating plan at last night’s Bunco! 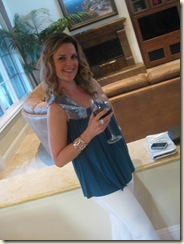 Great success! I was totally in control and ate enough to be satisfied. That is hard for me when there’s a delicious buffet of food in front of me.

Bunco was at my friend Jen’s house and she had made tons of homemade Mexican food. I had a handful of chips and guacamole. It’s hard to resist good guacamole! 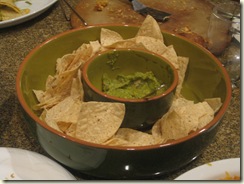 I decided that I could splurge on one thing. Usually I’m all about the bread basket, wine AND dessert. Last night my choice of splurge was two glasses of wine. Well worth it!

Jen made a delicious chicken tortilla soup that I had a bowl of and failed to photograph. I was too busy catching up with friends! 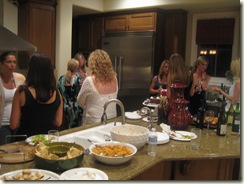 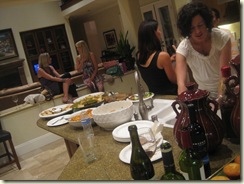 Jen also made this appetizer that that was chicken wrapped in some kind of dough and baked and it rocked! I had a piece of that as well. I left feeling satisfied and pleased with my restraint. Usually at Bunco, I’m known as the girl that goes for THIRDS. :)

This morning my Teddie peanut butter was on my mind again. I spread some on a toasted slice of cinnamon raisin bread and ate it with some strawberries. 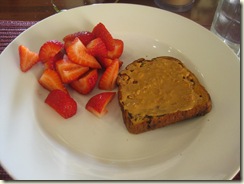 I took my son to school and took my daughter to an open house at her new preschool. Afterwards it was off to the gym. I missed my normal Cardio Muscle class so I had to workout on my own. I really don’t like working out solo. It’s so boring! I much prefer classes or working out with friends.

After my boring workout, I came home to make lunch. I whipped up an egg white omelet with tomatoes, red bell pepper and red onion.  I had a huge salad to go with it. Great lunch! 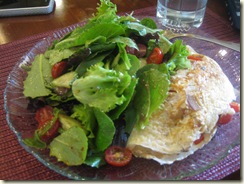 Then it was off to the dry cleaner and the grocery store. We are going to grill outside tonight so I had to pick up some stuff for dinner.

I picked up my son from school and came home for a snack: a big bowl of watermelon. 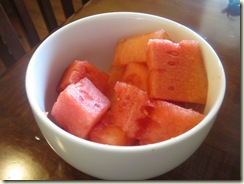 We don’t have a ton of plans this weekend and I’m excited about that. After all the traveling we’ve been doing it will be nice just to lay low this weekend!

What are you plans this weekend?