Today I had an experience of a lifetime. 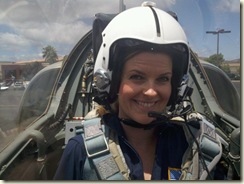 I flew in a fighter jet!

It all started at a charity event that my husband and I attended back in March. We won the auction entitled “Fighter Pilot for the Day.” My husband graciously allowed me to be the pilot!

Well, the big day arrived today! We drove out to the French Valley Airport in Murrieta, California. I bought my husband and kids, my mom and dad, my mother in law and a whole entourage of friends, including Lisa who took a TON of photos….which hopefully I’ll have soon! For now you can see the photos my husband and I took.

The actual pilot and owner of the the Aero Vodochody L-29 Albatross jet fighter plane, Troy, arrived and spent about an hour giving me all the safety information and run down on the plane. After hearing about how to EJECT and how to work the emergency parachute, I already felt like barfing.

We made our way out to the plane, took a ton of pictures (I can’t wait to see them!) and then it was time to climb aboard! Troy strapped me in he climbed in and turned the engines on. 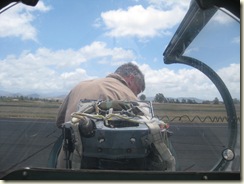 View of the wing from inside the cockpit: 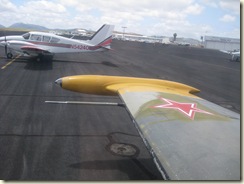 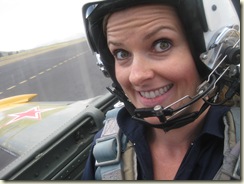 We took off and immediately pulled 2 G’s to the left and circled back to do a low fly by over the runway for everyone to see. I could see everyone waving at me! We flew by them…the plane can do Mach .85 (about 540mph)!  This time we pulled 3 G’s and made our way out to his vineyard home in Fallbrook.
Here are some pics I took from the plane: 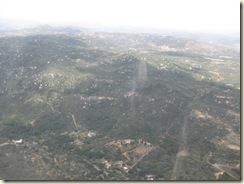 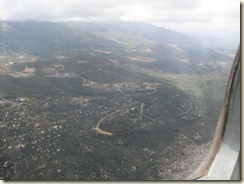 At some point during the ground school, my husband, kids and mother in law drove out to the pilot’s home in Fallbrook so that we could do low fly bys past the house.

Now at this point, all the maneuvers started catching up with me. I was not feeling especially well. The next maneuver was another low fly by past the house. My husband got some great photos. Check me out on the approach….I’m a little dot over the mountains in the middle left: 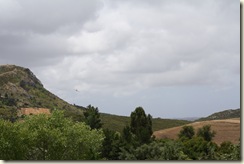 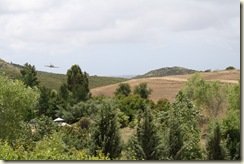 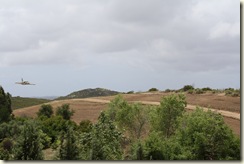 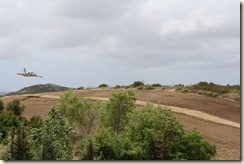 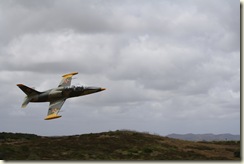 And back up I go: 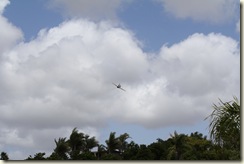 We did another pass over the house: 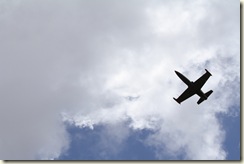 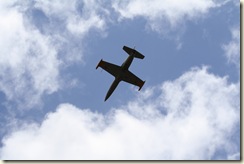 And then I barfed.

Yep. I already had my bag ready in my lap. Apparently, Troy has had many men barf and/or black out but I was the FIRST woman to throw up. I am proud.

That was it for the maneuvers for me and I was ready for my flight to be over. We made our way back to the airport and after a safe landing, I was back on solid ground….barf bag and all!

My parents took me back to my house where I met my husband. We baked some Costco pizza in the oven and after a few slices, I felt a bit better! It seriously took a few hours before I felt better. I still feel “off.”
Before I forget….we kicked off Memorial Day weekend last night by turning the grill on and cooking up some chicken sausages, corn and baked beans: 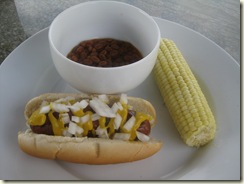 Breakfast was an English muffin with almond butter and and apple….. 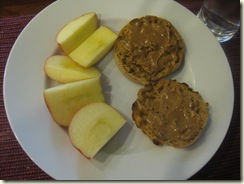 ….which I saw again later….during my flight. :(

Flying in a fighter jet was on my “bucket list.” I’m so glad I had the opportunity to do it! It was an amazing experience but one I’d NEVER do again. Not even if it was free. :)

Stay tuned for more pictures once I get them!

Have you grilled yet this weekend?