Thank you for all the well wishes! I’m feeling a bit better today. As promised, last night’s dinner was a quickie. Trader Joe’s frozen brown rice (love) with some leftover Coconut Curry Shrimp I found in the freezer. 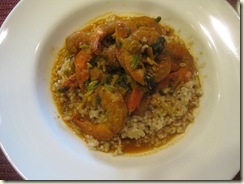 After the kids went to bed, it was another glorious Nyquil night.

I’m keeping up with my Vitamin C by having another grapefruit for breakfast this morning. I also made an egg sandwich by frying up a real egg with a couple of deli turkey slices and a slice of cheddar cheese. Mmm Mmm good. 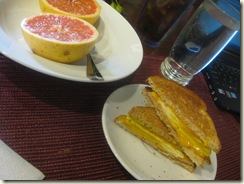 I took the kids to school and went to Starbucks to do a little work. I had a hot green tea and it was fabulous.

I went over to Great News for a cooking class. Today’s class was entitled All-American Favorites. 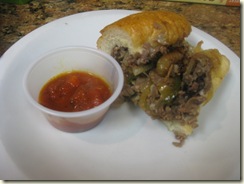 It was served with a side a marinara. I’ve never had them with marinara sauce before. I liked it! 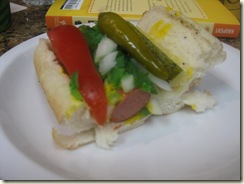 I’m a lover of hot dogs. I will not lie. I’ve NEVER had a traditional Chicago dog before! Why is that!?! For those curious, this dog was topped with mustard, bright green pickle relish, sweet onions, tomatoes, dill pickles and sport peppers. This was so fun to eat! Such an explosion of flavors!

The next two recipes were Extra Crispy Southern Fried Chicken and Cole Slaw with Buttermilk Dressing: 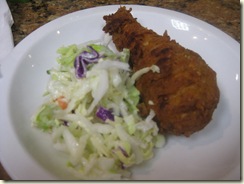 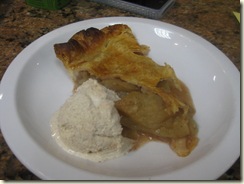 What’s more American than apple pie!?! I personally like the crust on the pie the best. Usually there are too many apples for my liking.

On the subject of “all-American” foods….there are a lot of them I DON’T like. I don’t like licorice, popcorn, cotton candy or lemonade. Am I weird or what? :) But I do LOVE hot dogs and hot wings. There. I’m cool now.

Have you have had a traditional Chicago Dog before?